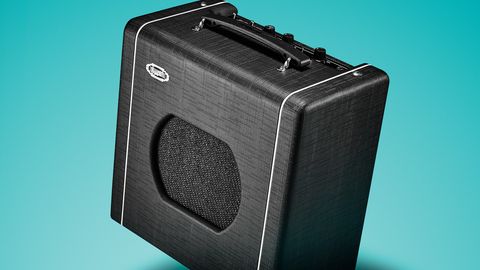 Cast your mind way back. Actually, just cast it back a few years, specifically to the early/mid part of the last decade. For a while it seemed like we couldn’t go to our front door without another low-watt mini-valve guitar amp combo turning up.

A modern, first-world problem you may call it, one with the explicit goal of delivering the sweet response of second-order harmonics to our ears. That trend has plateaued somewhat over the last few years, with every man and his soldering iron promising us valve tone at lower output levels moving on to modeling and impulse responses.

We’ll forgive Supro for a number of reasons, though. First, the company was reborn in the latter part of the decade, and second, if we’re going to have a go on yet another mini-valve amp, why not make it one from a pioneering vintage amp company? Go on, then…

Following on from the Blues King 12, the clue is in the name: it’s a single-channel, all-valve combo equipped with an 8” speaker. The power output caps at 1 whole watt, you get minimalist controls in the shape of a volume control (preamp gain), single tone control and a master output volume.

There’s also a boost control which can be operated by a footswitch) and an analogue line out which Supro says can either send a signal to an interface, or to use the amp as a massive distortion stage when feeding a bigger amp.

So, actually fairly well-stocked, then. But why in this new decade of almost no discernible difference between high-quality modeling and true valve amps, would we want to saddle ourselves with such a box? Well, for a kick off , just look at it! The Blues King 8 conjures a time where small amps were sat a-top a flight case to deliver tales of despair and heartache through a cloud of cigarette smoke, with its retro styling and vintage TV appearance.

Second is the simplicity. You plug in, set the controls and you’re rolling. For such a low-wattage amp, you might think that headroom will be minimal, but clean tones are perfectly possible with the input gain backed off and master volume pushed.

While dialing in a little more gain gets us into crunchy classic rock/blues territory at lower master volume settings, cranking the output and the gain together gets us a combination of throaty-sounding power amp breakup and the gentle saturation of the preamp valve for retro riffing. Engaging the boost takes this even further into punky/garage rock type breakup.

One benefit of using an amp like this is that it forces you to manipulate your tone with your guitar more often, getting you round the single-channel limitation.

The Blues King 8 isn’t really suitable for gigging, but for straightforward, decent valve sounds for practice or recording, this is one of our favorites.

For more information, head to Supro.