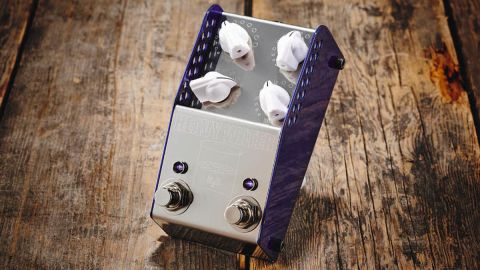 The Heavy Water is one versatile dual boost. Use it to wallop the front end of your amp or as an always-on secret weapon, it's all gravy.

ThorpyFX’s The Dane, a twin-footswich pedal featuring overdrive and boost, has many admirers but not all of them need a new overdrive.

Consequently, after many requests to put just the boost side into a pedal in its own right, Thorpy has done just that. The result is the Heavy Water, which not only provides that exact same high-headroom clean boost but also pairs it with a second boost that features germanium diodes in its circuitry for a different character.

Separate footswitches enable the two boosts to be used individually or together: the ‘Dane’ boost (RHS) running into the germanium boost (LHS). Both feature a knob to control the amount of boost plus another to adjust the low-end.

Set at minimum, the clean boost brings in a small but definite boost that enhances the sound, immediately making our amp sound better without undue alteration of its tonal character. If you do want a bit of tonal shift, the Lows knob can add a warmth and thickness that’s ideal if you’re looking for a bit more body from your single coils.

By the same token, rolling it back can make humbuckers a bit leaner, or could help focus the sound when hitting a drive pedal or boosting an already driven amp.

There’s loads of gain available and higher levels will drive the cleanest of high-headroom amps into break-up. The germanium side of the pedal is more of the same but has extra grit for a raunchier boost.

Both boosts on together is capable of delivering a ridiculous amount of gain that will truly pummel your amp should you decide you need it, but there are plenty of options for them to be used together more subtly – perhaps a small amount of clean boost always on as a tone conditioner with the germanium side kicked in for solos.

This is one of the most versatile boost pedals we’ve seen, capable of everything from always-on tone enhancement to kicking in a full-on screamfest. It’s a great candidate if you want a single pedal in front of your amp, but for ultimate flexibility pair it with your favourite drive pedal.

The DB10 features two completely independent boost circuits in a single compact housing, each with its own input and output jacks: the Clean channel is a transparent boost, and the Vintage channel is based on a classic treble booster.

Suhr’s offering includes two independent boosts, each with its own Boost and Hi-Cut controls. There is only a single footswitch here, but you can switch from Boost 1 to Boost 2 by pressing and holding it for about a second.