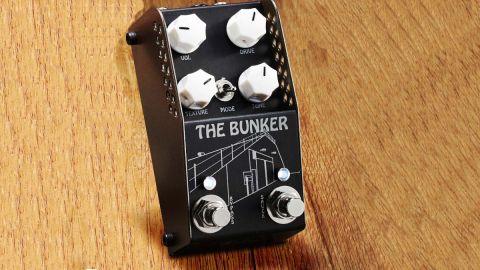 A more flexible and rugged version of the Brown Source that should appeal to a wider variety of contemporary guitar players.

Much like a bunker is covered in brown dirt, so too will your signal with this upgraded version of the Lovetone Brown Source overdrive.

The prototype was voiced using a Tele and Hiwatt amp while aiming for Jumpin’ Jack Flash guitar tone, and The Bunker manages to capture that stack-in-a-box overdrive sound in spades, covering an impressive amount of sonic ground with depth, dynamics and cut.

Similar to the Big Cheese/The Field Marshal, the four-way tone switch of the Brown Source has been reworked to include a three-way EQ/tone Mode toggle with a tone stack bypass footswitch labelled Sauce. When engaged, the sound is brighter and more gain-y with the Texture control set between nine o’clock and minimum.

Adjusting Texture - a feedback loop producing intermodulation distortion - adds harmonics and complexity to the sound, and, with the knob set around four o’clock, is roughly in line with the fixed position of the original incarnation.