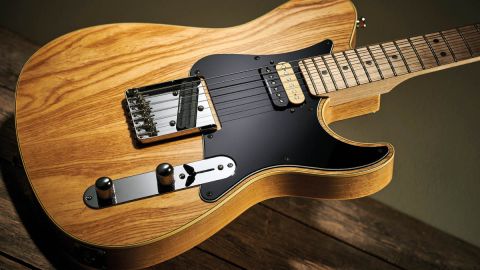 This really is a cracking guitar, balancing a modernised appearance with plenty of vintage influence and a voicing that’s a lot more ‘Les Paul’ than ‘Telecaster’. If we were Yamaha, we’d be shouting about it considerably more.

As an exercise in taking the essence of a classic and reworking it into an identifiable new design, the 1611MS - signature guitar for jazz great Mike Stern - takes some beating.

You also have to remember that the Pacifica design was conceived 30 years ago at the birth of Yamaha’s custom shop, although it’s aged remarkably well, perhaps with the exception of the rather off-trend headstock labels.

The body outline perfectly reflects the design concept. It’s virtually identical in length and width to its obvious inspiration, if very slightly thinner at 44.5mm, while the binding at the top edge adds to the subtle makeover.

The line from the upper horn flows a little more into the treble cutaway, which is enlarged, the horn slightly thinned. The treble-side waist is identical but the bass-side waist is slightly offset, even though the base remains symmetrical and pretty Tele-like. There’s no ribcage contour but the forearm is subtly contoured.

The wood stock appears very good. Perfectly centre-joined, the two pieces are mirror-matched in terms of their end grain, too, and overall it’s one of the lightest ash T-styles we’ve reviewed for a long time.

In terms of construction, the neck apes the original: the fingerboard is simply the face of the neck, not an added slab, there’s a rear skunk stripe, and truss-rod adjustment is placed, vintage-style and rather unhandily, at the body end of the neck under the overhang for the 22nd fret.

Also vintage-style is the 184mm (7.25-inch) fingerboard radius – unlike the standard 350mm (13.75-inch) radius of the more Strat-inspired double-cutaway Pacifica.

The hardware also retains a vintage vibe with the typical Tele-style control plate and its switch and control positions. Likewise with the walled stamped-steel base-plate of the bridge, although here we have six saddles with precise break points and through-body stringing, of course.

The tuners, meanwhile, also have vintage leanings with slot-head posts – even the single string retainer for the top two strings is placed early Tele-style between the G and D string tuners.

While the controls stick to Tele style, the pickups don’t: the full-size Seymour Duncan ’59 at the neck is paired with a more polarising single-coil-sized Hot Rails at the bridge. There’s no way to split either – what you see is what you get.

What we get perfectly reflects the intended style: a souped-up hot-rod T-style. Actually, the pickup choice is quite inspired. Yes, on the one hand we lose the classic Tele voicing and often overbright ice-pick edge of the bridge, but it’s replaced here with some smoother attack and obvious humbucking heft.

The neck humbucker is slightly pokier than the bridge as supplied but immediately feels like home with a really wide stylistic versatility from jazz through to seriously vocal lead wailing, the bridge pickup always just a shove of the three-way lever away for some rockier grunt.

There’s an inherent clarity to the response, though, which that neck PAF-style pickup maximises: cleans, then, sounds big and bell-like, and the mix position is a little fuller than classic but oozes with that parallel-linked funk that is useful for so many styles.

Visually, not to mention in terms of feel, you’re definitely playing a Tele-style with a nice fight, but what your ears are telling you is more classic gutsy Les Paul. The pickup and circuit choice remains an unusual choice for this so-called ‘Jazz’ T-style.

The playability is equally unusual with a very considered neck shape that marries a pretty mainstream 1st fret depth of 21.5mm with a narrow nut width of 40.5mm (and string spacing of 34mm) that tapers out to 23.2mm in depth at the 12th with a ‘normal’ width of 51.25mm.

The shaping is a fairly classic ‘C’ with relaxed shoulders and no sign of any choking on higher-position bends. Plenty of ‘improved’ T-styles might shave off some wood from the heel, which is left square-nosed here and Fender-like, but you do notice the extra space afforded by the wider cutaway.

Importantly, it still feels very much like its inspiration – and surprisingly vintage-y, too. The bare oil-finished fingerboard is already getting a little dirty and, like any oil-finish, will need a little maintaining as you put in the playing hours. That said, a little wax and elbow grease has the neck-back feeling exceptional in minutes.

In recent years Yamaha’s Revstar range has taken centre stage, but the 30-year-old Pacifica – albeit in its double-cut Strat-inspired guise – appears to be the meat-and-potatoes in the beginner to mid-range market.

This 1611MS, then, is an oddity. It’s the only Japanese-made bolt-on guitar in the catalogue, the only single-cutaway Pacifica design and, as we mentioned earlier, the only signature electric guitar model offered by Yamaha.

It may appear to be odd and overlooked, but this really is a cracking guitar balancing a modernised appearance with plenty of vintage influence and a voicing that’s a lot more ‘Les Paul’ than ‘Telecaster’.

Despite its signature artist, here’s an instrument that certainly isn’t just ‘jazz’. If we were Yamaha, we’d be shouting about it considerably more.