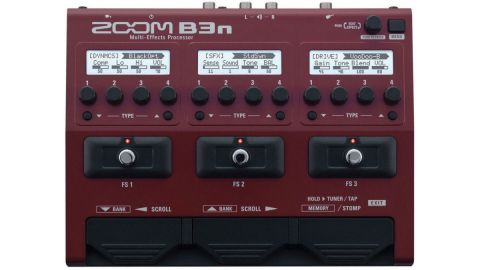 A small multi-effects box with lots to offer - and a price that’s just right.

Zoom’s B3n, the successor to the company’s popular B3 pedal, has 67 tweakable effects, includes amp models paying homage to Ampeg, Aguilar, Fender, SWR, and Trace Elliot, and allows for 150 custom patches that combine up to seven effects, amps, and cabs.

An aux in jack, headphone jack, and handful of rhythms make it a cool practice tool, while a USB input makes it easy to update firmware, download new patches, and tweak your creations. The B3n manages to accomplish all this while being seven inches deep, nine inches wide, and weighing just under three pounds.

The B3, released in 2012, has seven more amp models and 44 more effects. But with the B3n, it’s easy to download more amp models and effects with the free Guitar Lab software. The B3n also forgoes its predecessor’s active/passive input pad, as well as its XLR out with pre/post and ground lift; Zoom says that not having an XLR on the B3n keeps costs and size down while creating fewer parts that could fail.

The flip side of cramming so much functionality into a small box is it can take a minute to understand the B3n’s menus. Although the navigation is an improvement over the B3’s, some may blanche at the tapdancing and maneuvering necessary to get the most from the B3n.

Since he began playing back in the early ’70s, Bobby Vega has collected a couple rooms full of prime bass gear, including many of the inspirations for the B3n’s sounds. I knew it would be fun to run through the pedal with him. Powering up the B3n, we were automatically in “memory mode,” and we began making our way through the B3n’s 75 patches (each patch combines several effects).

We hit our first snag when we realized that in memory mode, it was impossible to modify effects or bypass them completely—for that, we’d have to be in “stomp mode,” which was more flexible but not as immediately satisfying. After a quick trip through the manual, we were on our way.

If you’ve read any of Bobby’s columns in this magazine, you probably know he’s a funny man with strong opinions. The compressed tone of most of the B3n’s presets clashed with his penchant for extreme dynamics, and it would have been nice to have an input-level control for some of his hotter basses.

Fortunately, there was plenty to like: The pedal’s offerings run the gamut from standard to silly, the noise floor is nice and low, and once we got the hang of it, the B3n gave up the goods. For every “Gremlins” (“this patch sounds like gremlins walking in your bass,” says the manual), there are several usable staples that worked right out of the box.

he unit’s 15 overdrives and distortions offer plenty of variety; Bobby particularly liked the “ODB-Overdrive” for Jack Casady-like saturation, the Jeff Ament-ish distortion of “SA-Drive”, and the whistles and whines of “Rock Drive.” Many of the patches, especially the grittier ones, made him wish he could send a clean signal out of one side of the stereo output and a dirty signal from the other. (Alas, there’s no bi-amp option.)

The B3n also offers 17 modulation effects, as well as 19 dynamics and filter choices, and although Bobby wasn’t impressed by the note blossom on “Defret” or the lows on “+LoOctave,” he had a great time slapping with “MX Clean.” We were surprised that a Dunlop Volume (X) expression pedal didn’t work with the B3n; Zoom recommends its own FP02M model.

We spent quality time with the B3n’s 11 delays and reverbs, its easy-to-use looper, as well as its 68 drum patterns, which Bobby deemed useful for practice and recording demos. Like every amp/cab simulation, the models on the B3n struck us mostly as good starting points for custom EQ/compression packages.

The B3n has plenty of tools and toys for students, solo adventurers, and gig masters. Although it offers easy access to its gifts, the B3n richly rewards those who spend time dialing in the details.