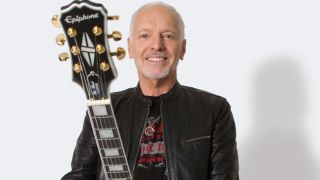 With classic tracks like "Show Me the Way," "Baby, I Love Your Way" and "Do You Feel Like We Do" in permanent rotation on rock radio, it's no doubt that Peter Frampton's place in the rock pantheon is significant.

Not only has Frampton penned some of rock's most inescapable tunes, he's also an eclectic and inventive guitarist whose abilities range from blazing leads to sweet, lyrical solos to full-on rock riffage — not to mention his influence in popularizing the Talk Box.

To find out more about the Epiphone Peter Frampton Les Paul Custom PRO, click here, and for the latest on Peter Frampton, head to frampton.com.

Frampton's cover of this Soundgarden classic appears on his 2006 instrumental album, Fingerprints, and has become a mainstay at his live shows. With bold and unpredictable lead playing, and some signature Talk Box action, Frampton puts his own spin on this grunge-era standard.

"Sunshine of Your Love" with Jack Bruce and Ringo Starr

Ringo Starr's All-Starr Band has featured a rotating cast of stellar musicians over the years, and this 1997 lineup with Peter Frampton and Jack Bruce is one of the best. Here, the band does Cream's "Sunshine of Your Love" with Frampton adding in some mind-boggling leads.

NPR's Tiny Desk series showcases artists in their rawest form, and it's in this setting we're reminded of the enduring quality of Frampton's songs—especially when the audience starts spontaneously singing along to "Baby, I Love Your Way."

"While My Guitar Gently Weeps"

Frampton isn't often compared to guitar legends like Eric Clapton or Jeff Beck, but his playing in this cover of "While My Guitar Gently Weeps" might give both a run for their money. The performance is taken from Chile's Festival de Viña in 2008.

"Show Me the Way" with Foo Fighters

Frampton was sitting in with Paul Schaffer and the band on Late Show With David Letterman when the Foo Fighters appeared as musical guests in 2000. Grohl and Co. joined Frampton for this rocking, multi-guitar attack on "Show Me the Way."

Frampton and Bowie's history goes way back—they were schoolmates at Bromley Technical School in Kent, UK, where Frampton's father was Bowie's art instructor. The duo reconnected later in life, with Frampton playing on Bowie's 1987 album Never Let Me Down and the Glass Spider Tour that followed. Here's a very awesome, very Eighties clip of "Rebel Rebel" from that era.

Frampton guest starred in this 1996 episode of The Simpsons, performing his Talk Box anthem "Do You Feel Like We Do." The guitarist appeared in the show along with Smashing Pumpkins, Cypress Hill and Sonic Youth.

Prior to his solo career, Frampton was a member of U.K. rockers Humble Pie and enjoyed a taste of success when their first single, "Natural Born Bugie," reached #4 on the UK Singles Chart in August of 1969. After a couple years of touring and recording with the band, he left in 1971 to focus on his own music.

In 1976, Frampton released his breakthrough LP, Frampton Comes Alive!, led by radio-friendly singles "Baby, I Love Your Way," "Show Me the Way," and the 14-minute slow burner, "Do You Feel Like We Do." More than forty years later, it's easily one of Frampton's most memorable performances, and remains one of the best examples of the Talk Box effect ever recorded.