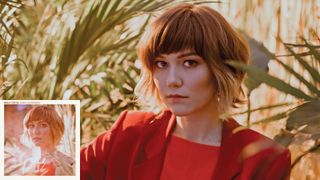 By the time the second song on Molly Tuttle’s new album, When You’re Ready, kicks in, you know something special is happening. As she frenetically clawhammers her acoustic guitar with propulsive power, “Take the Journey” sounds more like old-time mountain music turned to 11 than your typical songsmith’s fare. But, then again, this is not your average singer-songwriter.

Tuttle, the 26-year-old picker phenom who was the first woman to be crowned the International Bluegrass Music Association (IBMA) Guitarist of the Year in 2017 (and 2018), has been on the bluegrass circuit since she was a child.

“I love bluegrass. It gave me a set of skills that’s really different than I would have had,” says Tuttle, whose musical tastes range from the Stanley Brothers to far more contemporary artists — and whose influences range from Operation Ivy to Gillian Welch to the National. “In high school I got really obsessed with the Smiths. I tried to play like [Smiths’ guitarist] Johnny Marr.”

Although steeped in bluegrass tradition, Tuttle isn’t so much defined by the genre as it left an imprint on her songwriting. “There are definitely elements of roots music in there,” she says. “But it’s more focused on the songs I’m writing and what instrumentation is going to best support these songs.” A good example of this blend is “A Million Miles,” a bittersweet yet upbeat song Tuttle recently finished after Jewel and Steve Poltz started it more than a decade ago. Not that these marriages are always simple. “As I was getting closer to getting into the studio, I hadn’t heard anything from Jewel,” says Tuttle about the cut, which features Americana rocker Jason Isbell and fellow bluegrasser Sierra Hull. “But this summer I played it live and she tweeted a video, so I think she’s OK with it.”

Much like her love of classic bluegrass, Tuttle also has a soft spot for vintage guitars. Although she toured for a while with a 1944 Martin D-18, she found it didn’t handle the road too well. In its place, she has a couple of recent instruments from the Pre-War Guitars Company: a herringbone dreadnought made with Brazilian rosewood back and sides and an Adirondack top and a dreadnought mahogany. But how do they compare to her old Martin?

“It’s shockingly close,” Tuttle says. “I remember when I first played them, I was like, ‘Oh my god. How did they do something so great?’ They have a dry, mature sound to them.”

Come to think of it, you could say the same thing about Molly Tuttle, an exciting young artist with an old soul.