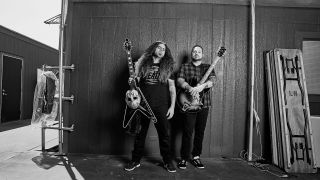 “Our fans are really receptive to all the things we do,” says Coheed and Cambria singer and guitarist Claudio Sanchez. “But I’m sure they’re very thrilled with what we’re doing this time.”

What Coheed and Cambria are doing “this time,” is releasing their new and ninth studio album, Vaxis – Act I: The Unheavenly Creatures. As for why he believes fans will be particularly pleased with the record? Specifically, because it marks a return to their prog-metal roots after a detour with 2015’s The Color Before the Sun, an effort that saw the band exploring relatively concise song structures and a more pop-rock-leaning sound.

In contrast, The Unheavenly Creatures is a massive, incredibly dense musical statement, with 15 songs running more than 78 minutes in length, and a narrative concept that once again dives into the Amory Wars saga — a sort of intergalactic battle between good and evil that has played out across the majority of Coheed and Cambria’s records over the past decade and a half, since the release of their 2002 debut, The Second Stage Turbine Blade.

Explains Sanchez, “When I was writing The Color Before the Sun, my son was being born and I wanted to capture that time without the guise of a concept. So that album was a product of circumstance. That’s why we took that departure. But I always knew it wasn’t going to be a permanent thing. And what was great was, I think doing that album allowed me some time to understand where we were in the Amory Wars story and find a new and interesting way to continue on with it.”

As for where the story picks up on The Unheavenly Creatures (the cover art of which is shown above)? “This record is an introduction to the characters Creature and Sister Spider, who are part of this group of bandits called the Unheavenly Creatures. And Vaxis is actually their unborn son, who is trying to convey a message to them from the future.” laughs Sanchez. “As far as what his ultimate goal is, I can’t reveal that just yet.”

It’s an immersive, multifaceted story, for sure, and one that’s grafted to a similarly dynamic soundtrack. From the epic space-metal opener, “The Dark Sentencer,” to the stomping, anthemic “Toys,” the doomy “Black Sunday” (“the guiding idea was: ‘If Kurt Vonnegut were a musician, what would something he wrote sound like?’ ” Sanchez says) to the gentle, orchestrated closer, “Lucky Stars,” The Unheavenly Creatures is a wild, varied ride.

“The sonic journey it goes through, we touch on everything,” says Coheed guitarist Travis Stever. “To me the record is most relatable to our Afterman albums [2012’s The Afterman: Ascension and 2013’s The Afterman: Descension] because they explored every aspect of what this band does, and I feel like this one definitely does that, too. In the studio, there was a sense of adding things without limitation and just fully going that cinematic route.”

When it came to the studio, The Unheavenly Creatures also marked the first time that Coheed and Cambria, which includes bassist Zach Cooper and drummer Josh Eppard, chose to produce one of their records on their own. “That’s reflected in the sound of the album, absolutely,” Stever says. “There’s this communication you don’t have when there’s someone in the middle going, ‘Well, you know what I think…’ So it made a difference that we did it ourselves.”

As for what comes next for Coheed, fans can rest assured that there’s plenty of epic, proggy music to look forward to. As is stated explicitly in the new album’s title, The Unheavenly Creatures is the first installment of what Sanchez reveals will ultimately be not a two-part series, or even a trilogy. Rather, it’s the beginning of a pentalogy.

“Absolutely,” Sanchez says with a laugh. “And I have all the beats. I understand what parts two through five are going to be, conceptually. Now it’s really just about writing the songs to help connect those dots.”