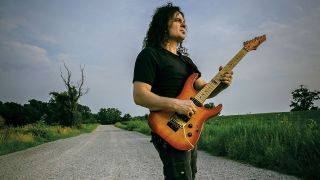 You sent us a ton of questions for Moore, a highly respected 'guitarist’s guitarist' who has been a pivotal member of UFO since 2003 (and who’s working on a new solo album as we speak). Here are some of the best - and some of the rest!

How does the semi-hollow version of your Dean Vinman Guitar compare to the solidbody version? Do you prefer the weight reduction, or do you find a difference in the sound? - Alain Smith
"It’s more of a sound thing. I don’t really even notice the weight difference as it is only semi-hollow. My inspiration was that I had a Gibson ES-335 when I was younger, and I liked that warmth and mid-range that it had, so I thought it would be cool to try to get that 335 sound with a signature model."

There are thousands of impressive guitar players on YouTube, but there doesn't seem to be any new guitar heroes who stand out and can release top-notch all-instrumental albums. Do you think musicianship has been lost in this new 'show-off' culture? - Bruno

"That’s hard to say. That could contribute to it, but it’s just the nature of the music business in general, I think. Maybe there’s too many people doing the same sort of thing so nobody stands out. It’s hard enough nowadays - with the business the way it is - to become successful if you’re in a genre that isn’t that big to begin with, and if you’re doing the same thing a lot of other people are doing, it all becomes one big blur.

"I think you’ve got to stand out by doing something really different. I’ll be on Instagram on mute scrolling down, and every fifth thing will be some guy shredding, with his fingers in a blur, but I don’t even turn it up. Maybe it’s the way everyone learns everything so quickly on the internet.

"It’s not the same as when I started - I listened to the record over and over and worked it out. That way the music really gets into your DNA. People often ask me for tabs of my songs, and my first thought is always, 'Try to learn it off the record.'"

Your playing style has changed a lot compared to the beginning of your career. How do you see your own evolution? - Anderson Gandra
"That’s something I’ve never given a lot of thought to. I just pick up the guitar and follow my own muse. I don’t plan but I get bored easily, so I have to keep exploring different directions and be inspired by different things. I like being adventurous."

Why don’t you perform a lot of your classic Mind’s Eye and Time Odyssey songs like Saved by a Miracle and Message in a Dream? - Adrien Allison
"I did a solo tour recently and I brought some of that back. I started doing Morning Star and Time Odyssey. It’s hard to choose. There’s a lot of material to pick from!"

I’ve been a fan since that Pepsi commercial you played guitar on in the '80s. Recently, I heard that you actually drink Diet Coke. I’m very disappointed in this development! Is it true? - Doug Stossel
"I went through a phase of drinking Diet Coke for a few years, but I try to avoid drinking soda of any kind altogether these days. I’m a coffee guy, but occasionally I do have a regular Coke."

I’m a lifelong UFO fan who has seen the band live many times. What’s your favorite UFO song to perform? - Dozo
"Wow, there’s a lot of them. I’d say, Too Hot to Handle, Lights Out, Rock Bottom and Baby Blue."

I’ve been playing for nine to 10 years and I’m about to take one year free from work to focus fully on guitar. Do you have any suggestions in terms of how I should spend my time during this year, practice-wise? - Albin Jakobsson
"I think you should listen to as many styles of great music as possible. There’s always a lot to be learned from listening. Find a good teacher and make sure you keep enjoying what you’re doing - and do it constantly."

What was the most memorable moment during the recording of your first solo album, Mind’s Eye? - Matt Alessandro

"We did that so quickly; the whole record was recorded and mixed in 11 days. I had four days to do all the guitars, rhythms, melodies, harmonies, solos - it was insane. I could never do another record that quickly again. Also hanging with Tommy Aldridge, Tony MacAlpine and Andy West in the studio - it was awesome being there with those guys."

There are certain songs that have that 'Vinnie Moore'-sounding progression. How did you develop your identifiable grooves in tracks such as Calling Out or Into the Sunset? - Glen Bolsius
"That’s a good question. Writing songs is an abstract kind of thing. It’s hard to say where it comes from or how to do it. I’ve honed my skills and gotten better over the years, but I still don’t know how it happens. It might be something you feel, or you might be noodling, and you’ll hit on a riff or something and then it inspires you."

What’s the one thing as a guitarist that you admire when playing songs and solos written by Michael Schenker? - Dominic Cappelletti
"I would say his sense of melody, like, say Only You Can Rock Me where the middle solo is so much a part of the song that you can’t play it without reproducing what he created there. Also, in the middle of Love to Love there’s a great melodic part as well that’s really key to that song."

Do you work out? You seem to be in great shape! - Debbie Warren
"Ha, thank you! I did when I was growing up, but then I stopped. I didn’t have time for it anymore. But I’d say for maybe the last three or four years I’m back to the gym three or four times a week. It’s important to stay healthy and fit!"

Would you ever return to your roots in music with another neoclassical album like Time Odyssey or The Maze? - Hashim Al-Moosawie
"I don’t see that happening at all. Those first two records were really hardcore in that style, then I did a couple more albums, including The Maze, so that’s four albums in that style. I think that’s enough. I don’t really feel that style so much anymore."

What is your new album called, when does it come out and what can you tell me about it? - Mark Ellmore

"I’m doing it on my own label again - same as my last one. It’s currently untitled. I’ll put it out as soon as it’s finished in the next couple of months. It’s all instrumental. I’m exploring some styles that I’ve touched on before, but in more depth. It’s hard to make money with recorded music nowadays.

"When I released Aerial Visions, I thought I’d be happy to break even - I just want to get the music out there. It ended up doing well, though, and it did make money, which was a bonus. First and foremost for me is to get the stuff out there and hope people like it. If there is a monetary reward, that’s great."

Have you ever written non-instrumental music outside of UFO and Vicious Rumours? - Rick Allen
"I have a catalog of vocal songs lying around, and it’s getting frustrating because I wanna put a band together and do a vocal record. As soon as this instrumental album is finished, I’m gonna get on with that. I’m really looking forward to doing that, actually. I won’t be singing, though. I’ll definitely need a singer!"

It’s very sad that UFO keyboardist Paul Raymond died April 13, 2019. What was it like playing with him for all those years? - Rick Friel
"It was a lot of fun playing with Paul. It’s sad that it’s over now. It’s gonna be weird to be on stage every night and look over and not see him there. I’m gonna miss him. It was a real pleasure to work with him. Paul wrote some essential UFO songs like Lights Out and Obsession. He wrote a lot of things that he didn’t always get credit for."

I’m 56 and began guitar lessons six months ago. I’ll be buying a nice electric guitar this Christmas. What do you recommend? - Jack Gill
"Nowadays you can’t go wrong. When I started, a got a cheapie from a department store for Christmas and it was really hard to play. That’s the way it was in those days. It’s no wonder so many people gave up.

"These days, there aren’t really any bad guitars. Just decide on your budget and there’s a load to choose from. You can spend $200 and get a very decent guitar that plays really well. See what looks good and feels good, and just go for it."

Did anyone influence your progressive side, and what’s your view on modern prog versus the '90s prog you represented with Mind’s Eye? - Darjusz Tak
"When I grew up there was Jeff Beck, Al Di Meola, Billy Cobham, Jean-Luc Ponty, Yes, Genesis, Gentle Giant and Pink Floyd. I think as time has moved on, a lot of the newer progressive stuff has a heavier, more metal feel. Dream Theater are the masters of it, I think."

Would you ever consider making another instructional video, this time focusing on your blues and hybrid-picked licks? - Tommaso Tufarelli
"I would consider it if there were an opportunity. Maybe I could even start doing my own thing using YouTube. A lot of people do that, and I could maybe use Skype, which seems to be what a lot of guys are doing."

Are there any unfulfilled ambitions you’ve got? Maybe there are artists you’d like to work with? - Martin Cuerden
"Hmmm. Britney Spears? Nah - only joking! I’ve always liked Flea’s bass playing; drum-wise, someone like Terry Bozzio would be cool."

What would be the first guitar you’d grab in a fire? - Paul Cummings
"Wow! Honestly, the first thing that I’d grab would be my computer or hard drive. I’ve got lots of song ideas; if I lost those, I couldn’t replace them. A guitar can be easily replaced as I don’t have any vintage instruments. The only vintage thing I have is a ’66 Fender Super Reverb. I could try to grab that, but I might break my back trying to pick it up in a hurry because it’s really heavy!"

I noticed your right-hand technique has evolved throughout the years, and you’re now incorporating more hybrid picking into your playing and doing less straight alternate picking runs. As your technique has evolved, can you still play all the stuff from your first couple of albums? - luis m.
"My technique did change. Using hybrid picking is something I’ve always done, and it’s crept more and more into my playing, but it’s not really a conscious thing. I can still play a lot of the early stuff, but I wouldn’t play it that way. I’d just use alternate picking for those songs!"