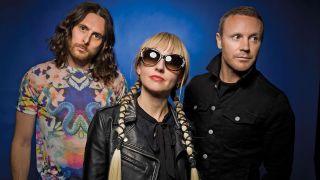 Aaarth, the fourth studio album by the Joy Formidable, continues the Welsh trio’s creative guitar-centric evolution. The album, a testament to the band’s flexible, daring approach to the guitar, fearlessly dives deep into a layered labyrinth of sound. According to guitarist-vocalist Ritzy Bryan, the band was in a tough, emotional place when they approached Aaarth (a title that references “arth,” the Welsh word for bear) — but they stepped up, pulling some of their most creative work to date out of a truly challenging time.

“There’s a lot of emotion in the writing process, and how you channel that can be a precarious thing,” Bryan says. “So we decided that we needed to make this record, that we couldn’t walk away. I think that opened the door on this outpouring of grievance mixed with relief. Then that turned into something quite playful as well. We started recording Aaarth with this collage-esque, free experimental approach, instruments coming and going, and lots of hidden textures that duck in and out like a Beach Boys record. Nothing was stiff or over-thought, and I think we needed that — and that way of creating together — to get out of ourselves and how we were feeling.”

Bryan and her bandmates — Rhydian Dafydd (bass, backing vocals) and Matt Thomas (drums, percussion) — recorded the album in their mobile studio as they toured the globe, and their varied surroundings, from the hills of Wales to the otherworldly rainbow canyons of the Utah/Arizona border, add to the spiritual feel.

“We’ve definitely made a colorful, mystical collage with this record, partly because of our surroundings,” Bryan says. “I love stories and seeing symbolism and meaning change with different cultures and interpretations. I see it in my lyrics, a lot of the imagery plays on being ambivalent because I’m often expressing a lot of things at once. That’s true of the title; it falls somewhere between a scream, an exaltation, a play on words, and then this motif of the bear that spiritually represents strength, wisdom and healing.”

For recording and live performance, Bryan relies on her Fender American Elite Strat. “I was gifted a Fender Strat as my first childhood guitar, so they’re familiar to me — the feel, the size, the playability. There’s no compromise on sound for any of those go-to things. They solo great, especially the ones I’ve customized, and I like how well rounded and versatile they are.”

With a vibrant, experimental approach, the band grew each track in process, deciding to worry later about how to recreate them on stage. “We’re not fans of revisiting, so a lot of what you see on Aaarth is from the first takes in our home studio. We record with effects on, and the tone is usually set and agreed as we start digging in,” Bryan says.