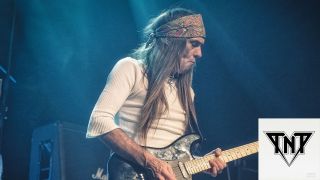 Following a succession of fist-pumping albums with TNT, Ronni Le Tekro was on the brink of becoming a major guitar god in the late Eighties, but the advent of grunge halted his career and that of many of his contemporaries. Guitarists including George Lynch, Nuno Bettencourt and Zakk Wylde, not to mention Dimebag Darrell, have all gushed fervently about Le Tekro’s awe-inspiring chops, a mind-blowing mesh of riff-infested playing spiked with succinct, searing guitar breaks that sound like no other guitarist, all wrapped within solid songs. Le Tekro is a Norwegian treasure (for starters, check out Le Tekro’s whiplashing lead break on the official video of TNT’s Eighties nugget “Tonight I’m Falling” on YouTube and you’ll have a glimpse of his fret-busting playing), and TNT is universally heralded as one of the foremost purveyors of melodic metal. Le Tekro is back in action with TNT’s latest and appropriately titled 13th album, XIII.

“All it took was one riff from a bearded guy with military boots, and lots of bands were put out of business,” snorts Le Tekro, of course referring to Nirvana’s “Smells Like Teen Spirit,” the song that abruptly put an end to the Eighties’ hair-metal boom. “I withdrew from the U.S. and ventured into avant-garde European markets. Beginning in the late Nineties, I recorded three albums with jazz guitarist Terje Rypdal.” Earlier that decade, Le Tekro formed a fantastic rock band, Vagabond, which released two albums to widespread acclaim in Europe and Japan. In 2002, Le Tekro reformed TNT. Since then, the band has continued to be active, releasing nine studio albums while touring mostly in Europe.

The distinguishing characteristic of Le Tekro’s style that leaves guitarists drooling on their fretboards is his signature “machine gun” technique, which he claims to have invented. “I created that playing style, but I don’t know who named it,” he says. “I started developing that technique in the late Seventies when I was in my first band, Rock Fire. I achieve it by playing heavy, rhythmic mutes with my right hand and paraphrasing with the left hand, with fast hammer-ons and pull-offs. That’s all I wish to reveal about it, because I don’t want the world to know how I do it.”

On XIII, Le Tekro’s driving riffs tautly propel the band, with mid-tempo songs added for a good balance. The album is imbued with the jubilant, uplifting songs that we have come to expect from TNT, and not overwrought with too many flashy, machine gun pyrotechnics, which are held in check by Le Tekro’s song-oriented approach.

“Good, melodic European metal is still alive in most of the world,” he says. “Unlike in the U.S., pure metal is the biggest music in Europe. I get fans letters from all over the world. I’m grateful to still have an avid underground following in the States. I want to tour in U.S. and kick some serious ass. Guitarists will get a good smack on their fingers.”

As told to Joe Lalaina

“I used my Bernie Hamburger 12-string electric, which is a fantastic instrument. Bernie should be the president of all instruments! I did a left/right dub and added a solo. The riff is pretty simple yet effective. Sometimes ‘less is more.’ That said, I believe in the future, love and music, and silence. Being in it daily is such a big part of my guitar playing, even more so than moving my fingers. I know I could have chosen city life and probably had a more successful career, but the cities didn’t shape me. Being close to the winds, rivers, snow and mountains determined my musical direction.”

“This was composed on a ukulele [Hawaiian tuning]. I cued the track with ukulele. Later, I discovered the musical nightmare of my life. I had to transfer the intervals and riffs I wrote on the damn ukulele to my guitar. I had to tune my guitar in two octaves to be able to play it with the same touch. It took me five days to just figure out the main riff on electric guitar — never again! I recommend other guitarists to stay off that instrument for sanity’s sake. I’d like to think I did pioneering work on the guitar parts — you write something on one instrument yet perform it on another.”

“This is based around a Scandinavian jazz waltz [6/8]. It very much has a ‘folk music’ feel to it. The guitars are massively dubbed in the intro; then there are just two guitar tracks until the big choruses hit, where I dub six tracks [three left/three right]. I love stoner music, and that heavily influenced the solo. Though I’m not American, I still got the blues. I always mix classical influences with folk, jazz and psychedelia. We basically love the British sound and producers [Roy Thomas Baker, ‘Mutt’ Lange, Tony Visconti, George Martin] and are very influenced by that.”

“This song is a based around ‘Mutt Lange thinking’: You have three basses — one playing 8ths, with another one playing disco octave bass, and a syncopated sub, like Foreigner. I orchestrated the guitars into block harmonies, doing voice harmony by voice as well as muted 8ths and power chords on the choruses. It’s probably the most orchestrated track on the album. What happened to variety in a 45-minute album? Don’t let old farts like me tell you that variation and color is not good and that sales are better. That’s my advice to the new generation of guitarists. Music is sacred regardless of commercial result. I always have my faithful 2204 50-watt Marshalls. Unlike the music business, they are faithful.”

“On this song I alternate between Marshalls and a Boss GL-100. I liked the ‘fuzzy’ sound it creates. The riffs basically modulate the minor modes. Going from F#m to E minor-A minor, etc. I smashed a couple of power chords here and there with the 12-string Hamburger electric to give it more dimension — not very logical modulations that I think all guitarists should be allowed to play. The solo was two takes that I combined. We wanted an up-tempo ‘Zeppelinish’ touch, while maintaining our own TNT sound and ideas.”

“TEARS IN MY EYES”

“On this one I do a psychedelic version of my guitar playing in the late Eighties. A simple riff ostinato with simple vocal melodies on top, this is one of the most experimental pop songs TNT has done. The solo section is based around the idea that the guitars could play like the Beach Boys sing. When you listen to the guitar solo, it evokes U.S. beach life. An original talk box guitar pedal creates the counterparts in the solo section. I play my chessboard ESP custom Strat on the choruses and used my '89 Fender Strat for the verses and the solo to create different temperature and dynamics. There’s a Morgan acoustic playing some color here and there. I think there must be close to 30 guitar tracks. The trick is to make it sound like one entity.”

“On this track I wanted light guitars a la Cheap Trick. There is also a touch of the Romantics and Simple Minds. The rhythm guitars where dubbed six times. On the riffs I added an octave guitar [capo] to highlight it. Not one of my personal favorites, but it has a certain glow. The riff is very strange. But then again, most of my shit is strange.”

“This song was an extended production regarding the instruments and vocal arrangements. It’s TNT's journey into letting the song live its own life. I use an acoustic for the verses plus an ESP electric guitar. On the choruses I play heavy bottom single notes to leave space for the picking guitar you can hear. On the middle section I use several guitars, slide guitar and different harmonic approaches — Phrygian, Egyptian/Middle Eastern, folk and melodic minor. In the end section, we turn up the tempo eight counters. The sound came out from a great take with the band so I only had to dub the rhythm once. I think the constant changes in keys, tempos and temperature on this song stand out in today’s melodic rock. TNT is ready and willing to keep on pioneering. I hope the listener has the same feeling.”