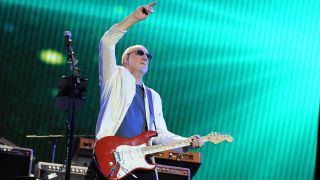 The Who's Pete Townshend is one of the most celebrated rock guitarists of all time. He’s known for his aggressive, rhythmic, dramatic playing style and various technical nuances that partially revolutionized rock electric guitar playing.

His sound is also a key feature of what makes him a distinctive player. Like any guitarist who has been around for decades, his sound has been developed and refined over time, particularly with new equipment and technological advances, plus acquiring the profile and finances to make any equipment accessible and have custom models made.

This article is about getting as close as possible to the distinctive Pete Townshend sound but from a more realistic starting point. As you'll see below many factors contain multiple possible sub-options, so this is more of an overview of the kind of equipment and approach you'll need to approximate his recognizable tones.

Already we have a point here that isn't exactly definitive. Townshend played a Gretsch on many studio works, and a Gibson SG live for a long period of time.

However, a Fender Strat is arguably one of his constant threads across the years, with him having played a highly recognizable customized red one for the last 30 years.

Its sharp bright tones and standout high-end are perfect for replicating many tracks by The Who. But the Strat’s known versatility is also important in enabling you to turn your hand to various other playing styles as well as just emulating Pete Townshend. It's famously a staple industry standard instrument, and for very good reason.

The key message here is heavy-gauge guitar strings, or at the very least a heavy-gauge low E string.

Townshend has at times played guitars bearing 12-gauge strings, which although far from unheard of, is much less common on an electric guitar than an acoustic. The electric will more often feature size 9, 10 or 11 strings.

He has also been known to play a electric guitar with a more standard string size (10-gauge), but crucially swapping out the bottom E string - which would be .46 in a set of size 10s - and replacing it with a .52.

This essentially makes his bottom end rhythm playing heavier and enables his strumming hand’s attack to be more forceful, creating the playing aggression for which he’s known.

There is a disclaimer here - and it isn't just keep the noise down so you don't annoy your neighbors. ‘Loud amplifier’ doesn't necessarily mean an amplifier turned up loud. Instead it means a powerful amplifier that has great volume and gain capacity, meaning therefore it creates a strong full sound at low volumes to due to its inherent power and quality.

Townshend has used both Marshall and Fender guitar amps over the years, with the Marshall being an industry staple and the Fender being particularly well known for its strong powerful clean sound.

Truly replicating his sound means using a loud amp turned down ‘low’ as opposed to a quiet amp turned up loud - and those two things certainly aren't the same.

Pete Townshend doesn't exactly have a complex pedalboard full of weird and wonderful options. Instead, the effects he uses are there to accentuate the drive, power and punch of his natural sound.

This means the use of an overdrive pedal and a compressor pedal at pretty much at all times, to strengthen his essential sound rather than add distractions, quirks or masks.

He has used other effects at times, of course, but to create a specific effect rather than as part of his standard distinctive sound.

Overdrive and compression are certainly two of the first pedals to buy for any guitarist looking to get close to his sound.

Specifically, he has been used to be known to use a Boss OD-1 overdrive pedal and an MXR Dyna Comp compression. In the interests of full disclosure, he has also been known to use other pedals, so there’s no substitute for trying a few different options out there.

This may sound a little more vague in that it can't be defined by a specific piece of equipment. However, in many ways, it is arguably the most important of the five points.

Even if you were plugged in to Townshend's specific personal rig, you would still be required to have an aggressive, hard strumming, dramatic playing style, a watertight rhythmic sense and supreme chordal creativity to get close.

So - if you have the means and budget - by all means get your hands on some of the gear above. But don't forget to practice and study his style and articulation, as equipment will only take you so far.

Alex Bruce is a writer for Guitartricks.com and 30Daysinger.com.