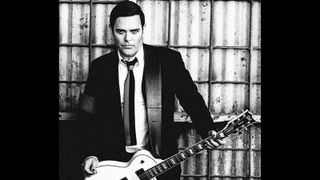 When this German guitarist and songwriter isn’t burning down the house with his main band, Rammstein, he’s exploring other musical avenues with Emigrate. In fact, their new album, A Million Degrees, is particularly hot at the moment. But what Guitar World readers really want to know is...

What do you listen to? Are there any favorites that you go to before, during and after tours and recording sessions? —Tiffany Ann Haliaka Hooper

I’ve always been a big AC/DC fan. Then there’s Big Black, who were one of the first industrial bands I listened to. There are so many records I heard when I was younger that I loved. At the moment, as I’ve gotten older, I love to listen to more melancholy music. I loved the last Radiohead — smoking some weed — it’s a blast! I really liked the last Depeche Mode record. I also like Lana Del Rey; there’s such great production on her records. I like electronic dance music as well. My taste in music has gone from one extreme to the other. The one thing I can’t really get into is hip-hop, especially German hip-hop, which is very different to U.S. hip-hop. There are certain songs I like, say Bring Me the Horizon’s song “Doom,” but I miss those days back in the Nineties when all those metal crossover bands came up and it was such a unique fucking sound. I don’t have that feeling with rock music nowadays. I feel that rock in general at the moment is a little dead.

Do you consider the new Emigrate album, A Million Degrees — and the band in general — to be the soundtrack for your life? —Marek Piorko

Ha! Well, part of it! It’s a very personal statement that I have and part of it is definitely to do with my life, and I’m not afraid to show that personal side. I have so much freedom. For example, I just did a video with my daughter in it and I’m very proud of that. I like being able to show certain kinds of emotions that I haven’t shown in Rammstein, so it’s part of my life as a soundtrack. I’m a very visual guy as well. I visualize things when listening to music, and if I don’t see any pictures it’s not a good song, so I think it’s kind of true that yes, it may well be a soundtrack for my life.

Do you think Emigrate may absorb too many ideas that could be applied to Rammstein? —Daniel Gil

I used to write for the two projects in different ways. After years, that kind of merged together. For example, a song like “War” could have been a Rammstein song. On the other hand, when I play stuff for Till [Lindemann], he likes the things I never would have thought of as a potential Rammstein song. I’m constantly writing anyway. I always have a lot of material on hand. It might be a case of whenever it’s time to make a record with Emigrate or Rammstein, then I’ll have a bunch of songs that would be good to go anyway — and I wouldn’t worry over whether it was a song for one project or the other.

With the heightened acts of terrorism around the world and particularly the Las Vegas shooting, where thousands of people came from across the U.S. to enjoy a music festival, does it make you fearful to perform live? —Arturo Cortez

No, I would not let that affect me. I think if you go in that direction, you are lost. I would be more afraid that something more random could happen, like, if you were to visit the Christmas markets that we have in Europe or something — but not the live medium.

When writing a song, do you have a guest vocalist in mind, or does the idea pop up after it’s finished? —Danielle Leslie

After finishing the song. The song usually tells me what it wants; it talks to me and I listen carefully to what it’s saying. There are people I would be interested to work with — Martin Gore from Depeche Mode, for example. I’d love to write a song with him. If that were the situation, I’d write something to maybe pass on to him and then perhaps we could pass ideas back and forwards.

Is there any old unreleased Rammstein/Emigrate material you would have released if you had the chance? —Gustavo Alvarez

I have so many ideas that haven’t been finished songs that I'll go through that might be terrible, but that I can then work on and find something in that idea that can make it into a better song. I do have finished Emigrate songs as well that might not need too much work to have them ready to release.

“Come Together” first comes to mind, but there are a lot of great Beatles songs!

How did growing up in East Germany impact your ability to hear Western music — and how did it influence your musical style and lyrics? Do you think your career would be different if you had lived in West Germany during those years? —Johanna Wickman

If you could choose a film or TV show to be a part of musically and/or be in, what would it be and why? —Kristy O’Regan

I would have loved to have been in Game of Thrones. I really love fantasy worlds, you know? Also Westworld. I like the idea of letting a certain different character out of yourself. There’s that thing, you know, when you’re a child — maybe you want to be a cowboy and then play a certain kind of character in a different world and let that out of your personality.

What’s your reaction to female fans who are charmed by your looks or admire your guitar skills? —Romelia S.

I mean, what would you feel? You feel pretty good. If someone thinks you’re beautiful then that’s really cool! I’d like people to know me as well — my personality — know I’m not an asshole, you know?

Well, that’s an easy one to answer, and probably the one most people might have guessed as well. “Du Hast.”

How the hell do you get your hair so perfect? —Gracey Lacey

Ha! That’s an interesting question. It’s like with everything — a lot of rehearsing!

Why do you choose red and black in your videos and on the Rammstein tours? —Rammses Muñoz

Well, red and black symbolize one side and the other — a balance, dark and light. Rather than black and white, I like black and red where the red is love, life and blood, and the black is darkness.

You seem to have found a happy work-life balance. What’s your secret? —Victoria Lynne Dershem

I don’t think it is that balanced! I mean it’s tough because you subconsciously create a world as an artist and I think you can create more when you suffer! I think if I were happier, I wouldn’t write — but you can’t really change that. It’s complicated to find the right balance between being miserable and writing — and getting out there and living. It is very difficult.

If you were to compare the limitless freedom of Emigrate and the democracy of Rammstein, which one do you think works best with your own creativity? —Eda Adalıoğlu

Hmmm. I would say Emigrate. Nothing is black and white — there’s always a lot of gray zones — but just for me as the person who creates a certain vision in Emigrate, I kind of work as a team leader. In Emigrate I feel much more capable to work for the song, but in Rammstein we have to allow for everybody’s egos, which might not always serve the song best. I like to have a vision. I still need the ideas of people, but ultimately in Emigrate I have the last word and that actually gives me the freedom to step back, and in some ways perhaps be more of a team player than in Rammstein.

Would you consider recording a track in a language other than English or German? —Kamil Kwiatkowski

I’m very open to that kind of thing. For example, I really love French culture and I was thinking that it would be cool to record in French.

Do you like to be in Berlin or New York when you are creating music? —Mark Ellmore

I like to create more in New York than in Berlin. I’ve been living back in Berlin since 2011. When my child was born, I made a decision to raise my child in Berlin rather than New York.

In the Rammstein performance where everyone was pulled off stage except you and Schneider, you were wearing a white dress. Why the dress? —Dani Lawson

Because I’m always trying to do something different from everybody else!

Back in 2016, you sold a large collection of some of your old ESP instruments, including the two rare 901 models used to record the earliest Rammstein work. Why did you sell them? —Skyler Jade

I kind of realized that having a lot of stuff makes me very unhappy. One of the things I like to do is get rid of stuff, which includes guitars. I’m not a guy that would collect like a hundred guitars, so I’m happy to sell them.

How do you find inspiration to write your lyrics and riffs? —Freddie Shawna Fahrouka Svenja Hieko Oldman-Wolf

Curiosity — to stay open, to stay out of the comfort zone, travel, watch a lot of movies and to get fucked up!

Has becoming older and wiser made it harder or easier for you to be creative? —Femke Van Havermaet

Good question! I think you evolve as a songwriter. I think you kind of “catch” a song from the universe, but the longer you’ve been writing songs, the better your skills are in showing you how to make that idea become something fully formed. A song seems to have its own life, and I’ve learned not to force the song too much but to let it take me where it wants to go. I would say it’s actually easier for me to write as I get older, as I have more experiences to draw on and more experience in how to make a song work — knowing when it’s time to stop adding things and let the song breathe. However, there’s a naivete at the beginning that you may lose as you get older. Maybe the hardest part as you become older and wiser is to not let yourself get stuck in your comfort zone and not become too predictable.