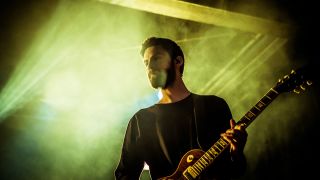 If you’re looking for credentials, Eirik Kråkenes - the virtuoso guitarist and leader of Norwegian instrumental progsters Astrosaur - has them in abundance.

As a guitarist, Kråkenes has played with heavy icons like Leprous and Ihsahn, and, along with his bandmates bassist Steinar Glas and drummer Jonatan Eikum, studied at the Conservatory of Music in Kristiansand.

The fruits of that considerable experience find their home on new album Obscuroscope, which weaves stoner-rock vibes with progressive time signature shifts that deftly flit between math-rock, black-metal and everything in between.

Accordingly, Kråkenes’ rig needs to cover a lot of ground, starting with a classic Gibson/Orange backbone and adding a boatload of gain, delay and multi-effects to channel the band’s transcendental riffs and leads.

“I bought this guitar used around 2005, I think. It came with these Seymour Duncan pickups that I don’t think were in there originally. I don’t know which model, but they are pretty hot in terms of output.

“The bridge pickup sounds fantastic for everything overdriven and distorted. The neck pickup sounds really good too, especially for cleans, but the lightest string kept getting stuck under the neck pickup when bending it. So that’s what the tape is for.

“The neck is pretty thin for a Les Paul, and it’s just a very comfortable and easy guitar to play. Strings are 10 to 52s, tuned to D standard.

“For Astrosaur, I use two amps in stereo, and they’re used simultaneously at all times. As an instrumental trio, we explore ways to make our band sound as big as possible, while keeping the benefits of having few musicians. One of the first things I decided to try was using two amps in stereo.

“I like simple old school one- or two-channel amps, and love the sound and look of Orange. Ideally, I set the Orange as loud as it gets before breaking up too much and match the other amp to that volume.

“I try to be pretty flexible in terms of which amps to use in a setup like this, depending on what I can bring and what is available at the places we’re playing. I don’t mind using two different amps, often I’ve found that the sounds complements each other and gives an even bigger stereo image.

“I currently just own the Orange, so the other amp is usually a Twin or whatever similar that is available at the venue. Shout out to Marcus from Heigh Chief for letting me borrow his Super Reverb occasionally.”

“Just started using this again. I use this for slow filter sweep effects only, like on Karakoram II off our new record.”

“This pedal can get pretty loud, so I put it before the OCD to tame the output a little. I turn both knobs all the way up, which in addition to producing a big, bassy, over the top octafuzz sound, also makes the oscillation slightly less noticeable. This gives two- or three-note power chords on the lower strings more clarity.

“It’s currently my only fuzz and I use it on as much as I can, single-note riffs, powerchords, solos, whatever. It’s discontinued now I think, so one of these days I’m getting a backup from eBay.”

“This is V4, I think. It does the old-school distortion sound really well, and also cleans up nice when rolling back the volume on the guitar. It also sounds good on almost any amp you throw it at, too. I usually start with gain and level around noon and go from there depending on the break up and stage volume of the amps I’m playing.”

“I use this occasionally for looping, for example on the intro of the Radiohead cover we did. I also have this tape delay TonePrint installed, which oscillates beautifully when it’s space-out time.”

“Probably the one piece of gear I’m having the most fun with right now. For this particular rig, I use it mostly for modulation, reverbs and other effects I might want to try out in a song without having to buy a separate pedal.

“It has stereo outputs, aux outputs and flexible routing, which can be used to route different effects to different amps, for example. You can get really creative with this, especially in a stereo setup like mine or with even more amps.

“It also has great amp and cab simulations, especially for more modern metal sounds. I recently did a tour filling in for Azusa, using only the HX Stomp direct, a preset up/down switch and a tuner. We played both club shows and festivals, and the sound translated to different rooms and PAs really well.

“I usually prefer amps, but when you have to fly in or the logistics of a tour demands a really small footprint, this is a very good solution. And at home it works perfectly as a USB interface for recording and practicing.”

“I use a lot of delay, and it’s a great way to take advantage of the stereo amp setup. I really only use two patches on the Timeline. Both are ping-pong types, with maximum stereo spread.

Feedback and delay times are identical I think, it’s mainly the delay level that’s different: one patch with high delay level, for tremolo-picking parts for example. The other patch has lower level for subtler delay effect, but still retaining the big stereo spread.”

Obscuroscope is out on 27 September via Pelagic Records.