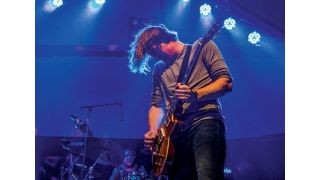 “On ‘Signs,’ and, in fact, on a lot of songs, I will put the pick away every now and then and just play with my hands. I’ve found that when I have to sing and play at the same time, it helps to not use a pick. For whatever reason I can connect better with the rhythm parts that way. A lot of that part of my style comes from listening to Jimmie Vaughan, Albert Collins and Jeff Beck. Those are the three guys I have studied more than anyone else, when it comes to how to attack the strings of a guitar.”

"LIVING FOR THE CITY"

“We’ve been doing this song on and off for years. I’ve got a Boss AW-3 Dynamic Wah that I use on it. You can really control its effects, depending on how you play dynamically. I’m a big fan of that pedal.”

“When [guitarist] Reeve [Carney] and I trade off in that song, we’re completely flying by the seat of our pants. It’s great, and so much fun. I’ve known Reeve since we were kids, so he’s kind of like a brother to me. When you play music with somebody you know that well — and you can communicate with one another in that way — it’s really special.”

“The set list in Tulsa was all over the place. Three of us decided to change the first song the moment we got onstage, except we didn’t tell the other two guys. [laughs] So we were all behind the curve from the get-go. We’ve tried putting ‘Blew Up’ in other places in the set, but it just works best as an opening song. That’s part of the fun of set lists: the trial-and-error of finding out what works and where.”

“That one, on the record, is more like a pop song geared for radio. But live, we do it more like a soul tune than a pop tune. Plus we have what we call our ‘Bob Marley moment’ in it when we do a bit of ‘Three Little Birds.’ That gets everybody smiling. You can’t be sad and listen to Marley.”

“It’s one of the songs from my new album, Signs. It’s probably the hardest one for me to sing in the set, and I’m still getting used to doing it live. It has a lot of lyrics in a short amount of time and you really have to breathe right to get through it without messing it up. Plus my voice was kind of in bad shape in Tulsa, so I was a bit worried about singing that night. We’d just come from Colorado – there were forest fires there, so I had a nasty cough from all the smoke. But actually, it’s really easy to sing in the room at Cain’s. It’s very forgiving, so everything was cool and it all worked out.”

“I use a Gibson 335 on it. When I go to the bridge pickup on that guitar and turn the tone down, or almost all the way down, I get that nasty old ‘Hubert Sumlin meets Howlin’ Wolf’ tone. ‘Rack ’Em Up’ lends itself well to that kind of sound.”

“When I was a kid, I lived in Minneapolis. There was a local group called the Hoopsnakes. Their lead singer and their keyboard player, Bruce McCabe, ended up joining my band. He’s the guy who wrote a lot of my first songs that were on the radio, like ‘Rack ’Em Up’ and ‘Lie to Me.’ He’s a musical hero of mine. His band did a version of ‘Forty Days & Forty Nights’ with the same riff I use. The riff in Muddy Waters’ version doesn’t really sound similar to it. My rendition is more like a Delta blues version of Muddy’s song.”

“As you might imagine, there are some folks who are there only to hear ‘Lie to Me.' So when I start out doing an acoustic-folk version of it, I can almost hear them out in the audience going, ‘Aw, man. I wanted to rock.’ [laughs] So it’s cool when the band comes out for the big finale. Those same people are now like, ‘Yes! We get to rock again!’”