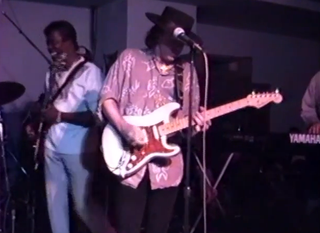 Some more incredibly rare video of the late, great Stevie Ray Vaughan became available on YouTube a couple years back.

Below, watch Buddy Guy jamming with Vaughan on July 30, 1989, at Buddy Guy's Legends in Chicago.

The event? It was Guy's 53rd birthday party.

This video mysteriously appeared on YouTube March 19, 2015. We think the top commenter (on YouTube) puts it best:

"Wow  is all I can say!!!!! I've heard this was video taped from a few  people, even saw a couple grainy photos from said video. But I never  thought any of this would see the light of day! Please tell me the whole  thing was recorded!!?"

Damian Fanelli is the online managing editor at Guitar World and Guitar Aficionado. His New York-based band, the Blue Meanies, has toured the world and elsewhere. Fanelli, a former member of Brooklyn jump-blues/swing/rockabilly band the Gas House Gorillas and New York City instrumental surf-rock band Mister Neutron, also composes and records film soundtracks. He writes GuitarWorld.com's The Next Bend column, which is dedicated to B-bender guitars and guitarists. His latest liner notes can be found in Sony/Legacy's Stevie Ray Vaughan: The Complete Epic Recordings Collection. Follow him on Facebook,Twitter and/or Instagram.