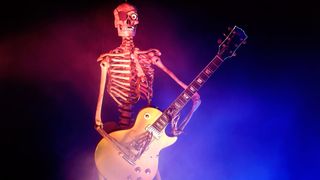 It’s the most wonderful time of the year, that time when you have to learn how to play your electric guitar while wearing a bigfoot costume, when the doorbell goes and you’ve got four-foot Freddy Krueger at the door singing a Cardi B duet with Yoda, all for Reese’s Pieces.

It’s Halloween, of course, the goth Christmas, May Day for the macabre, and the season that grants heavy metal fans special dispensation to put their iPhone in the dock at social gatherings.

In keeping with that spirit, and because - let’s be honest - we see everything through the lens of guitar playing, we’ve compiled 15 of our favorite Halloween guitar tracks.

We’ve got the spooky, the morbid, the prog - and even some folk. Now all that’s left to do by the 31st is learn to walk in this darn cardboard Flying V costume...

A church bell, heavy rain, the flattened fifth, Ozzy Osbourne’s moribund yowl, and the birth of heavy metal, Sabbath’s eponymous anthem has lost none its dark majesty five decades on. The cover art is kind of something, too, like a colorized riff on Jack Clayton’s classic chiller, The Innocents.

Ozzy says it’s the most terrifying song recorded. He could be right: scary is hard to get across on tape.

Here, Iommi is playing a Gibson SG Custom Special known affectionately as 'Monkey', which has a P-90 in the bridge and a P-90-esque custom-wound John Birch Simplux, the SG taking his Strat’s place after its neck pickup crapped out.

How different might Dario Argento’s filmography have been if everything had gone to plan, if the Italian horror master’s first choice Giorgio Gaslini composed something he liked, if Pink Floyd then answered the call. But the haunting compositions of Simonetti and co. would come to define Argento’s movies even before we see the first drop of blood, leather-gloved hand with knife, or smashed window pane.

The main motif is played by harpsicord with Simonetti’s guitar playing a supporting role, growing more prominent as the piece blossoms into lavish prog arrangements. Something like Red Witch’s Synthotron II might help you nail some of those harpsicord lines on guitar.

A work of staggering prog ambition that defined Oldfield’s fast-blooming genius - this was recorded when he was still just 19 years old - and yet his magnum opus is still inextricably linked to a film about a little girl who gets possessed by a demon, pukes pea soup into the face of the clergy and uses language that’d make a sailor blush.

Still, great movie, great track, and there is something cold and inhuman about the arrangements that makes it perfect for a horror film. It builds a world. Oldfield used a 1966 Fender Telecaster that was previously owned by T.Rex’s Marc Bolan, and recorded pretty much the whole album himself - a Mozart-esque triumph of overdubbing.

Edging out the hyper-kinetic syncopation of Bark at the Moon, principally because this is arguably Randy Rhoads’ finest moment with Ozzy, Mr. Crowley is an epic of ‘80s metal that’s played out in what Nigel Tufnell would describe as the saddest of all keys, D minor.

Like everything Ozzy recorded with Rhoads, it has that infectious Friday night energy - a contact high from Ozzy’s social largesse and exhilaration at a new start post-Sabbath - and some high-brow melodic excursions when it’s time for Rhoads to take a guitar solo. The guitar playing is jaw-dropping, of course, and Mr. Aleister Crowley himself was pretty Halloween, what with his magic and all.

Buy Blizzard of Ozz on Amazon

The coolest rockabilly punks to have walked the earth, The Cramps sported a feral disposition that suggested everyday was Halloween, that we regular working stiffs were the real freaks. Maybe they were right.

I Was a Teenage Werewolf sees their goofy B-horror sensibility color a chaotic psychobilly jam with dark theater. Of all the descendants of early rock ’n’ roll players such as Duane Eddy and Link Wray, Poison Ivy was the most dangerous, wielding the twang from her 1958 Gretsch 6120 or Bill Lewis double-cut through a Fender Pro Reverb as though it were a flick-knife.

Buy Songs The Lord taught Us on Amazon

OK, so what’s so spooky about this slice of Caledonian pagan folk then? Well, nothing really. Giovanni nails the pastoral vibe and it’s the perfect soundtrack to doing some arts and crafts - perhaps some basketing. Of course, if you have watched Robin Hardy’s seminal British horror The Wicker Man you would know that the wickerwork of the good folks of Summerisle is not something you want to get too close to.

But we are presuming you have seen the film, and bring to Corn Rigs the extra-textual knowledge of what happens to the god-fearing when they go searching for missing girls on Scottish islands after the apple crop failed.

Buy The Wickerman soundtrack on Amazon

What could be more terrifying than the dark? The prospect of Blaze Bayley leaving Wolfsbane to front your favorite heavy metal band? Ha! A horror without compare, and yet this was indeed the horror to arrive from the shadows once Bruce Dickinson took a bow after the tour cycle for Fear of the Dark was done.

Fear of the Dark has always remained a fixture in the Iron Maiden set for good reason. It is Maiden in miniature: epic, simple melodies, the twin-guitar dynamic that was easily upsized for the return of Adrian Smith, and a Hammer horror atmosphere that speaks to the kid in all of us.

Buy Fear Of The Dark on Amazon

Considered a goth-rock standard and sounding like a piece of automatic writing from the volatile Australian post-punks, Release the Bats is to rock ’n’ roll what the third act is to a horror film.

Nick Cave might cut a debonair figure these days, the suave troubadour with a dark past, but with The Birthday Party his all animalism, less poetry, as though he’s possessed after the dark sex-horror-bats voodoo having gone wrong.

Harvey and Howard deliver a master class in skronk, with their atonal scratch fizzing around a propulsive bassline from Tracy Pew.

Now for something that your Aunt May can dance to, maybe something to bring some light back into the room after The Birthday Party have opened up the seventh circle of hell.

Perhaps the biggest trick that Steve Miller pulled with Abracadabra, which after all is a paean to magic, was in making FM radio play it on heavy rotation throughout the ‘80s.

This was a Steve Miller Band much changed from the early days of golden-hued psychedelic rock, with Miller on synths, and you’ve got some simple single-coil support work from the guitar, and hooks that really will reach out and grab ya.

Now for some too-much perspective from Buck Dharma, with a hardy rock perennial that muses upon the inevitability of death - thematically apt for its brief appearance in John Carpenter’s Halloween.

(Don’t Fear) The Reaper has been covered by all kinds of bands, which is understandable but also preposterous, as no-one would get close to the vibe of the original.

Buck Dharma wrote and performed lead vocals on the track, and he was all about the Gibson SG. This and a warm tube amp would get you in the ballpark tone-wise on a track to make you nostalgic for the ‘70s whether you lived through them or not.

A bone-fide FM rock staple with a huge, ambitious middle eight. That would never happen nowadays.

Buy The Best Of Blue Öyster Cult on Amazon

Written by Paul Stanley but slowed down and used as a vehicle for Gene Simmons to fully explore his demon persona, God of Thunder has really got to be in here, if only to inspire the heavily costumed into more ghoulish displays of vomiting blood. KISS are another of these rock bands for whom Halloween never ends.

Sure, Simmons is beastly and excels in going all-in with the theatrics, but the real monster here is Ace Frehley’s famous 1974 Les Paul Custom 'Budokan' in Cherry Burst, loaded with three DiMarzio humbuckers, two PAFs and a Super Distortion.

It’s not difficult to hear why The Sonics would become such a big influence on punk. The power with which Larry Parypa played and the sheer fuzz-bomb tone still sounds like it’s going to test the speaker cone’s build quality over five decades later. The solo in this is 100 per cent rock ’n’ roll.

The garage rockers from Tacoma, Washington, were way ahead of their time. They formed in 1960 and when they come to record Here Are the Sonics!!! in 1964, they had adopted a take no prisoners approach to levels, requiring everything in the red, an approach the likes of Iggy Pop would use to devastating effect on Raw Power.

Back then, Parypa was using a Jazzmaster through a Magnatone amp, but would later use an Epiphone Riviera as his main guitar.

Buy Here Are The Sonics on Amazon

Highway to Hell often gets plenty airplay come Halloween but Hells Bells is more in keeping with the season, eschewing the major key celebratory outlook on damnation in favor of a sinister driving groove in A minor.

The rest of Back in Black sees the good time hits come thick and fast but its opener has a funereal melancholy feel, understandably so given that this was AC/DC getting back into the studio after Bon Scott’s death.

The tone, as ever, is pure rock crispy crunch. Malcolm on a Gretsch G6131, Angus on his Gibson SG, Marshalls cranked all the way up.

Buy Back In Black on Amazon

Now, here is an oddity from the days when the likes of Jimmy Page and Ritchie Blackmore worked in the shadows as session players. Of all their collaborators, David Sutch, better known as Screaming Lord Sutch, was the most outrageous.

He was a proto-Alice Cooper figure, a Great British eccentric who would go into politics in 1983 with the Official Monster Raving Loony Party (30-odd years too late some might say) and cut tracks like the super-infectious British beat classic Jack the Ripper (1963).

Hands of Jack the Ripper isn’t quite so catchy but it’s got the same ghoulish vibe and, crucially, guitars, featuring the Man in Black himself on guitar, Noel Redding on bass. What a weird, fun recording that captures the spirit of febrile period for rock music.

OK, let’s empty the room. Halloween has gone to hell already and there are even some folks handing out granola bar and dry-baked vegetable snacks. If Ozzy says Black Sabbath is the most terrifying track recorded, then Slayer delving into the mind of serial killer Ed Gein will take the Palm d’Or in the Terrifying and Evil category.

And it’s also a wonderful lesson for metal players in how two guitars can play off each other. Yes, when Hanneman and King let rip in the solos, but especially in the intro/verse riff, which uses a Fernandes Sustainer to great effect, proving that heavy can still be subtle and haunting, as the riffs are traded and ring out in harmonic sustain.

Buy Seasons In The Abyss on Amazon