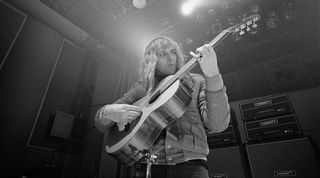 When it comes to the history of rock, the acoustic guitar isn't always thought of as leading the charge. Who needs it when we have 100 watt amps and distortion pedals?

But while electric guitar is certainly synonymous with rock and roll, the acoustic is undoubtedly part of its fabric as well. Here, we share 10 of some of the greatest acoustic guitar riffs of all time.

Opening with an acoustic riff so ubiquitous and familiar that it's lived its own second life as a pop culture punchline, Stairway to Heaven has long been seen as the Everest of Led Zeppelin's formidable discography.

Though Jimmy Page slowly builds the song from its humble intro to its legendary, climactic solo- the song's masterfully layered acoustic (and electric, of course) guitars are integral to that development.

2. Pink Floyd - Wish You Were Here

Though David Gilmour and Roger Waters have offered differing versions of the subject matter of this, one of the band's most enduring and iconic songs, its power is ultimately impossible to deny.

Often thought to be about the band's long-estranged founder and former frontman, Syd Barrett, the song aches with longing and melancholy. Nowhere are those feelings more well-defined than in Gilmour's gorgeous solo acoustic intro.

The closing track on Uprising, the final studio album Bob Marley released during his lifetime, Redemption Song is a profound, brave and still-moving rumination on mortality and history. Opening the song with a simple, but profoundly beautiful riff, Marley covers an extraordinary amount of ground in just three-and-a-half minutes.

Borrowing lines from a 1937 speech by Pan-Africanist Marcus Garvey, Marley implores his listeners to rise up against tyranny and oppression, while simultaneously confronting his own mortality.

The reggae icon would succumb to cancer in May 1981, at the age of 36, just seven months after the song's release. Rarely has such a simple chord progression been used to convey so much.

One of the legendary group's most well-known acoustic numbers - not to mention one of their more beloved songs in general - Closer To the Heart is graced with an absolutely lovely picked acoustic intro courtesy of the band's master guitarist, Alex Lifeson.

For all of Tom Petty's brilliance as a songwriter, one thing that cannot be said about Free Fallin' is that it's one of his more complex tunes. As a matter of fact, he wrote the song to make his then-producer, Jeff Lynne, laugh.

“I was playing the keyboard and I just happened to hit on that main riff, the intro of the song,” Petty told Billboard in 2016. “And I think Jeff said something like, ‘That’s a really good riff, but there’s one chord too many,’ so I think I cut it back a chord, and then, really just to amuse Jeff, I sang that first verse. Then he starts laughing.”

What began as a joke was soon given an irresistibly breezy acoustic progression, one that launched the song onto near-permanent radio rotation, and gave Petty the biggest hit of his long career.

In early 1968, the Beatles set off for a spiritual retreat in India, where, in addition to practicing meditation, they spent a lot of time with acoustic guitars. It became a prolific songwriting period for the group, who later that year recorded their 1968 double-album, The Beatles (commonly known as the White Album).

The LP includes the McCartney favorite Blackbird, written during the India trip. The song centers around a memorable fingerpicked pattern, inspired by a Bach piece, and based on a technique taught to him on the retreat by the folk singer Donovan.

Winning a Grammy for Record of the Year in 1978, "Hotel California" is perhaps best remembered for Don Felder and Joe Walsh's dueling guitar solos played in the song's finale.

It's legendary lead playing indeed, but equally deserving of praise is Felder's haunting, slow-burning 12-string acoustic progression that kicks the song off and carries it through 'til the end.

One of Spotify's most all-time streamed songs of the Nineties, Wonderwall is anchored by its timeless acoustic guitar progression, written by Oasis' chief songwriter, Noel Gallagher.

If you've spent any time around college dorms in the last 20 years, you don't need hard data to be aware of this song's ubiquity. But cliche or not, there's good reason why almost every guitarist learns it.

9. Heart - Silver Wheels/Crazy on You

Silver Wheels is the rousing, flamenco-inspired acoustic intro that kicks off Heart's Crazy on You.

As the band's first American single, it was the perfect introduction to Nancy Wilson's fiery guitar playing and her sister Anne's mighty vocals, and remains simply one of the best intros of all time.

10. Metallica - Nothing Else Matters

"That was the song that I thought was least Metallica, least likely to ever [be] played by us, the last song anyone would really want to hear," James Hetfield told the Village Voice in 2012. "It was a song for myself in my room on tour when I was bumming out about being away from home."

Indeed, Nothing Else Matters may have alienated fans of Metallica's thrash-metal sound on its release in 1991, but the song - and it's simple, powerful acoustic motif - remains part of the band's live set to this day.