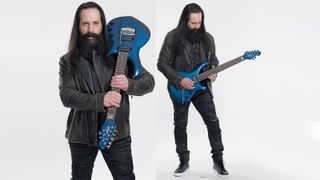 “It’s ‘Damage Control’ from my [2005] solo album, Suspended Animation,” Petrucci said. “It’s just crazy. I’ve said this before — I feel like I’m doing damage control the entire time I’m playing it. It just has so many weird things about it — time signatures and technical challenges and things. A concentration song, that one.”

That’s when Satriani added, “It’s traumatic to stand on the side of the stage and watch him get through it… At the end of the song, I’m the one sweating. And I figure, ‘I’ve gotta go backstage and start warming up!’”

Well, Petrucci dropped by Guitar World HQ to shoot a new video this past January, and — being more than a little intrigued about the challenges of “Damage Control” — we asked him to elaborate.

“It’s probably one of the more progressive and weaving songs, and it has so many different sections and parts — plus it’s pretty long, so there’s a lot of memorization. During the night, when that song would come up, it’s like, ‘OK, time to focus!’ [Laughs] The chops have to be really up, and everything needs to be firing on all cylinders. There are so many different themes — it’s almost Dream Theater-esque, the way it departs into the soloing. And, even though the song is an instrumental, there’s sort of an ‘instrumental section,’ if you know what I mean. In doing that, it’s going from one part to the next really quickly. There are a lot of angular things happening, so I have to shift techniques really quickly.”

Has he ever screwed it up?

In terms of Dream Theater’s new album, Distance Over Time, there’s at least one song that’ll have Petrucci on his toes when the band hits the road — the cosmic closer, “Pale Blue Dot.”

“That one definitely has the most technically challenging pieces in one song,” he says. “We purposely made the middle section sort of this adventure where we go off on an instrumental tangent, with lots of different parts and time signatures. It’s one of the fastest sections on the album as far as alternate picking to get down — so that’ll be a hairy one!”