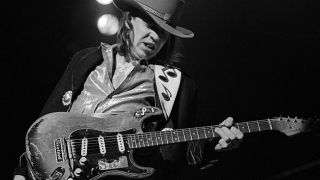 Remember those old Bugs Bunny cartoons where a pompous Bugs would race a tortoise - and lose? The moral of the story: slow and steady wins the race. The same principle can hold true with electric guitar solos.

Spitting out 16th notes at 200 beats per minutes isn’t always the most winning approach; sometimes, a lead calls for a little less hands and a little more heart.

So let’s step back, take a breather and examine some of rock guitar’s greatest slow burns.

For our purposes, we’ll go with his take on this Stevie Wonder–penned instrumental, from 1975 Blow By Blow, on which Beck opens with a gently moaning major 2nd to root C interval that rises and falls like a caterwauling alley cat, setting up the fluid, vocal-like phrases that follow.

2. The Beatles - Something (George Harrison)

The 'Quiet Beatle' steps out of Paul and John’s writing shadow and pens his first song to be released as an A-side on the Beatles’ 1969 Come Together single.

George Harrison’s Something is lauded for its lush melody and tender lyricism, but guitarists will note Harrison’s deft guitar solo that follows the operatic bridge as a characteristic example of his reserved, yet highly tuneful style.

An often duplicated, but distinctly underrated guitarist, Buchanan inspired no less than a few of rock’s most recognizable players, including Jeff Beck and Gary Moore. This haunting A-minor piece opens like Faustian theater, with gloomy organ and prophetic, spoken-word lyrics.

When Buchanan finally unleashes on his Telecaster, the droning notes cut through the mix and wail with eerie vocalization. Check out the expert volume swells at 4:30, a Buchanan trademark.

The title track from Dire Strait’s chart-topping 1985 album is often overshadowed by the flashier Money for Nothing and Walk of Life, but this somber, G# minor track has found a place as background music in films such as Spy Game, and television shows Miami Vice and The West Wing.

While Mark Knopfler opens and closes the song with a tasteful indulgence of front-pickup soloing, it’s the longer, tone-soaked lead at the end that showcases his soulful, fingerpicked sound.

Moore is no slouch when it comes to burning a fretboard, and the Irish rocker does taper off unto some excessively speedy bits towards the end of this instrumental version of his 1979 U.K. hit (the long, descending trill at 6:15 is particularly note-worthy).

The majority of this live version of Walkways, however, is laden with Moore’s subtle vibrato and stratospheric string bending. The song was intended to show off the former Thin Lizzy guitarist’s blues prowess, and has left few Moore detractors in its wake.

It took David Gilmour little more than a heavily compressed Stratocaster, some reverb and a mound of mourning for his detached former bandmate, Syd Barrett, to create the melancholic opening to the nine-part centerpiece from 1975’s Wish You Were Here.

Supposedly, Barrett visited Abbey Road Studios in London during the album’s recording, but as the story goes Gilmour, along with the rest of his band, didn’t recognize the former Floyd leader due to his drastically altered appearance.

07. Led Zeppelin - Since I’ve Been Loving You (Jimmy Page)

Since I’ve Been Loving You was outfitted in Zeppelin’s live set before the recording of Led Zeppelin III began and remained a staple of their show until the band’s dissolution in 1980.

Though for the song’s main solo Jimmy Page delivers screaming C minor and C minor pentatonic runs, he opens the tune with a 45-second passage of beautifully restrained phrases.

Emotive solo work is the cornerstone of blues guitar, and it’s only appropriate King’s highest charting hit contains some of his most dark and chilling leads.

The song, written by Rick Darnell and Roy Hawkins, showcases the most prominent techniques that made B.B. King a household name, including deep string bends and an impossibly wide vibrato.

The final track on Vaughan’s final studio album with Double Trouble features some of his most delicate playing.

Legend claims the album’s engineer noticed as the band was recording Riviera Paradise that the tape reel was about to run out. To no avail, he tried to warn the distracted band they might lose the recording. The song clocked in at nine minutes, finishing at the exact moment the reel of tape stopped.

A list of slow guitar solos wouldn’t be complete without the inclusion of Eric 'Slowhand' Clapton himself. And while Layla garners most of the accolades on Derek and the Dominos’ only studio album, Bell Bottom Blues, which features only Clapton on guitar (Duane Allman didn’t sign on until after the song’s recording), is a tour de force in its own right.

Heavy-handed string bends and a pushed, as opposed to pulled, vibrato lend Bell Bottom Blues a gracefulness that counters the furious passion of Layla, and reaffirms Clapton as one of rock’s premier soloists.