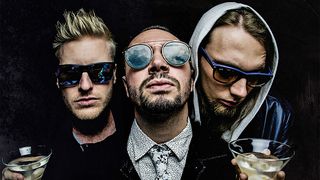 Mike Dawes is known primarily for his incredible acoustic guitar compositions, in which he utilizes all manner of extended techniques — including fretboard tapping and percussive hits on the guitar’s body — to craft three-dimensional arrangements that cover bass, harmony, melody and rhythm in stunningly executed one-man-band instrumentals. So it’s safe to say his newest project, Nik Mystery, on which Dawes trades in his acoustic for an electric to play in a trio alongside Finnish producer and multi-instrumentalist Jukka Backlund and Periphery singer Spencer Sotelo, is something of a left turn for the British guitarist. As for what the music on Nik Mystery’s debut five-song EP, When, sounds like?

Dawes says you could call it “alternative synth-laden pop-rock,” but, he admits, that “doesn’t really have a ring to it. So we call it ‘Popwave.’ It’s sort of sun-tinged retro pop music from the Eighties. Synthwave in part, but pop in essence.”

Indeed, one listen to the slick, synthy and ultra-melodic When bears out Dawes’ statement. “I guess obvious references would be bands like the 1975, Paramore, INXS, Peter Gabriel and Michael Jackson,” he says, adding that Nik Mystery, quite obviously, “is about as far removed from solo fingerstyle guitar and [Periphery’s] progressive metal as anything.”

But while the project is clearly outside of Dawes’ usual stylistic realm, it also is music for which he and his band mates have a true affinity. “Spencer is big into Eighties music and I’m in the same boat,” he says. “I grew up on Rocky IV, so that should speak volumes about where I’m coming from.” But, he adds, “the real voice here is Jukka’s. He was actually in a huge European pop act called Sunrise Avenue, and his production credits are plentiful. He’s been looking for an excuse to get back into the pop sphere, and he’s a master keyboard player. And all the synthesizers on the record are his.”

Even while Backlund’s synths take center stage on these songs, there are still moments of guitar flash, in particular in the slippery, technically dazzling leads on tracks like “So” and “Drive,” where Dawes says he “tried to vibe with an Eddie Van Halen/Neal Schon tone.” He continues, “It was actually really interesting to do, as the songs are so synth-heavy. The obvious solos were easy to fit in, but most parts were positioned to dance around and meld with the rhythm section.”

For Dawes, the opportunity to bring his playing into a new realm was one that was too good to pass up — and also one that, these days, made perfect sense to take advantage of. “It’s an exciting time to be a musician,” he says. “A ‘label-less’ landscape means that musicians can explore totally different styles.” Just as importantly, he adds, Nik Mystery is a chance to have “immense fun with great friends from far-flung corners of the planet. I’ve always been a soloist and I love creating solo acoustic pieces, and I’ll always do that. But this is filling a different creative void. And the others feel the same.”

Dawes says there are plans to bring Nik Mystery out on the road, but “not before the full-length is out,” which will ideally happen later in 2019. Until then, he’ll be plenty busy. “This year I’m writing my third solo acoustic record, so expect a lot more Mike Dawes content, as well as plenty of tours,” he says. “I’m also touring a bunch with Justin Hayward from the Moody Blues.” Add Nik Mystery to that schedule, and you have “three different genres with immense variation.”