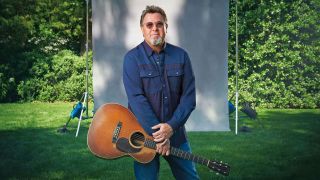 Vince Gill has been playing the guitar for 55 of his 62 years. His virtuosic and sweetly expressive solos - whether flatpicked or played fingerstyle - have graced more than 20 genre-spanning studio albums that have earned him 21 Grammy awards and just about every honor the Country Music Association has come up with. Asked if he feels like he has anything more to prove, the easy-going guitarist laughs gently and says, “Probably not. I’ve had a good run.”

He pauses a little before expanding on his answer: “I mean, there’s still a lot that I can’t do on the guitar - we could fill a book with it. But a while ago I reached the point where I said, ‘I’m just going to play what’s necessary.’ That comes with age and experience. You don’t think like that when you’re young, but it’s a peaceful place to be. I’m content to say what I want on the guitar, and I can leave it at that.”

At an age where most guitarists might give thought to easing their workloads, Gill has been pulling triple duty. In addition to performing solo shows, he’s maintained a steady recording and touring schedule with his country swing ensemble the Time Jumpers, and since 2017 he’s been trekking the globe with the Eagles in an incarnation that includes band members Don Henley, Timothy B. Schmit and Joe Walsh, along with guitarist Steuart Smith and the late Glenn Frey’s son, Deacon.

“I would be a pretty fortunate man just to be doing my own thing,” Gill says, “but to play with the Time Jumpers and now the Eagles, it’s like, ‘How more blessed can I be?’ But I just try to do the best I can and honor the music I’m playing. I can’t do more than that.”

Despite the hectic pace, Gill managed to carve out a block of time recently to record his first solo album in three years, Okie, which is perhaps his most personal and poignant release to date.

“I’m proud of where I come from,” the Oklahoma native explains. “We were called ‘Okies’ as a put-down, but you know, we’re good and honest people. So I’m kind of appropriating that term as a way of saying, ‘You can’t judge us with preconceived notions.’ Goodness knows there’s too much of that.”

Much of the album is bathed in the sound of acoustic guitars (the tender ballad Black and White is a fingerstyle gem), although Gill and guest pickers Tom Bukovac and Jedd Hughes let their electrics snarl on the dusty country rocker That Old Man of Mine.

On two stellar cuts, Nothin’ Like a Guy Clark Song and A World Without Haggard, Gill pays tribute to two of his departed musical heroes - the latter track pairs the guitarist’s heartfelt strumming with sweeping pedal steel textures that reach toward the heavens.

“This record is so important to me. As we recorded, I listened to it over and over, and I left no stone unturned,” he reveals.

“Through that, I also arrived at the process of elimination. There’s no extraneous guitar playing on it; every note played had to matter, and if it didn’t, I took it out. So in the end, I have an album that I found very pleasing to listen to, and I think my fans will feel the same way.”

During the 1970s, the Eagles were right up there with Led Zeppelin when it came to rock ’n’ roll excess. Would you have joined them back in the day?

Probably. You know, I had my days of roaring, but I’m glad they’re over. I think those guys are glad their rowdy days are done, too. I don’t judge people. I would never say, “I can’t play with you because you’re too rowdy or you’re too whatever.”

Even so, we can’t really picture you taking a chainsaw to a hotel room.

[Laughs] I’ve done a few things. I’m no saint, but you know what? I would’ve done it because the music’s so important. In many ways, the Eagles are the top of the heap in the history of American rock bands. It’s hard to think of a more impactful group. So yeah, I would’ve joined them at any point in their career - in a heartbeat.

You’re used to playing in a big band with the Time Jumpers, but did you have to adjust your playing style to fit into the pocket with the Eagles?

Oh, sure, but it’s not a heavy guitar gig for me. You’ve got Joe Walsh and Steuart Smith playing their parts. Steuart’s been in the band for 20 years, and Joe’s been with them for 43 years. So I just went in to do what was needed - be a good asset and a team player, somebody who’s easy to get along with.

Did you have to consider the fact that you had to play and sing precisely what’s on the records? This gig isn’t about spontaneous jamming.

I knew that going in. Those records are so iconic, so I was going to stay true to them. Yeah, I’ve got a little bit of a spontaneity streak in me, but that’s not what those songs deserve. If you came to hear Hotel California and you didn’t hear those solos the way you know them, you’d leave disappointed.

It must be delightful to sing New Kid in Town, but it’s probably bittersweet.

Oh, of course. My mantra has been “I wish I wasn’t doing this,” because that would mean Glenn would still be here. That’s what’s in my heart, but that’s not life. But I think Don knew what was important - the legacy of those songs and the fact that they had to be sung.

As a guitarist, what’s surprised you about playing with Joe Walsh?

Well, I always knew how great he was. I was playing Rocky Mountain Way in my bedroom when I was 15. I played it in garage bands and at sound checks. I think Joe Walsh could be the most important guitar player in American rock. You got Chuck Berry and several others, and across the pond there’s Jeff Beck, Jimmy Page and Eric Clapton. I think Joe is every bit as important as any of those guys.

He plays with a great brevity and restraint; there’s always so much thought he puts into each note. That’s what I like about him - his patience. It’s not about whittling a bunch of notes and trying to impress you. It’s the way he’ll bend a note, the time and care he’ll put into it. I’m just in awe of him.

On your new record, songs like Black and White and Forever Changed have weighty themes. A lot of country fans don’t want message-oriented songs; they want fun and good times.

Well, I don’t think that I’m for them. In terms of what people might associate with country music, I’m 62; I’m not 25 and trying to bust the charts. I’ve lived a life and am trying to talk about things that deserve to be written about. The point is, I’m trying to make you feel something when I write these songs, but it’s not coming with judgments. Even if there’s struggle in the songs, there’s some hope in them, as well.

There’s some stellar fingerstyle playing throughout the record. How many fingerstyle tracks do you tend to blend together?

Well, it’s the three of us playing - Tom Bukovac, Jedd Hughes and me. Both of those guys are phenomenal, and everybody listens to each other. We don’t fight for space. Everybody honors what the other one’s playing and plays off of that. It’s really neat when it works like that and it all meshes together. It’s what makes great food.

How many passes of each track do you usually do before everybody knows what they’re going to play?

These guys play remarkably right off the bat. There’s not a lot of gnashing of teeth or figuring out a part. Everybody has enough history and experience to come in knowing what not to do before you ever get started. There’s so much that could go wrong, but it never does.

The acoustic solo in The Red Words is beautifully understated. Was that spontaneous, or did you have it worked out?

I had an idea - it’s all about listening to what somebody’s playing off of you. There might be two notes that I’d stick on at the end of a phrase, but it would cover up what Jedd was doing. That was me and Jedd doing that call-and-response thing. It’s really like dancing. It’s really beautiful when two people really know how to dance, and it’s just as pretty when two musicians know how to play off of each other.

The Dobro solo on A Letter to My Mama is gorgeous. What I like about it isn’t just the melody; it’s in the way I’m hearing your fingers pluck the strings.

I played it with the meat of my fingers rather than the pick. That’s why it sounds the way it does, because the meat of your finger will make a different bloom come out of a string than a pick, which is a harder, straighter purer sound.

That song’s about my mom. I wrote it about 18 years ago with Dean Dylan, but I never got around to recording it. In all the music I’ve made over these 55 years, what my mom said to me some time ago was, “You’ve done a lot of neat things, but I always loved to hear you play the Dobro.” I don’t play it that much, but I knew I had to include a Dobro solo in this one. And I’ll confess, I was very scared and a little insecure about playing it. The simplicity of that solo is what makes it poignant and beautiful.

We’re trying to picture you being nervous in the studio. Does that still happen to you?

Well, if you weren’t nervous, it wouldn’t matter. When the red light goes on, it’s mind-numbing. Even after 45 to 50 years of doing it, you’re still a little bit scared, because somebody is listening.

You’ve got a pretty big guitar collection. Which models did you use on this album?

There’s probably 12 different acoustic guitars that I played. I’ve got a really serious Gibson collection - J-45s, Southern Jumbos, J-200, J-185s. They all find their way onto the record. If you’re a painter, you want to use a variety of colors.

For electrics, I have my favorite white Telecaster and a really great ’69 Strat. And I’ve got a ’59 Sunburst Les Paul that sounds beautiful. Those are my favorites. Every song is different, so I try to just try to play what’s appropriate, what I think would fit the space the best way. You can’t play every guitar all the time, so you just go for feel and sound, and hope for the best.