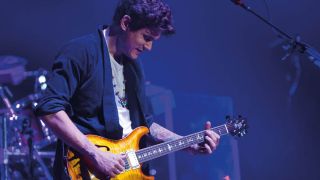 Paul Reed Smith built his very first guitar in 1975 when he was a student at St. Mary’s College of Maryland. Although he was just 19, he realized the only thing he wanted to do was build guitars, and he eventually dropped out of school.

When Smith sold the second guitar he ever made – a copy of a double-cutaway late-Fifties Les Paul Junior – to Derek St. Holmes, who was Ted Nugent’s rhythm guitarist at the time, he realized that his dream of becoming a professional luthier could easily become a reality.

From the very beginning of PRS Guitars, artists have played an essential role in both the company’s success and the design of its instruments. When Smith established his workshop in an attic at 33 West St. in Annapolis, Maryland, during late 1975, the very first guitar he built was a custom solidbody styled after a Gibson Byrdland commissioned by Nugent.

When Smith completed a new guitar, he would take it to concert venues in the Washington, D.C., area and Baltimore when major acts passed through and try to make his way backstage to show guitarists his work.

Soon he was building guitars for Peter Frampton (the second guitar from the 33 West St. workshop, completed in April 1976) and Al Di Meola, and by the time Smith had built his first 20 instruments, about half of them were made for artists.

Other notable early PRS players included Roy Buchanan and Howard Leese, who purchased the first curly maple top guitar that Smith built, which was originally commissioned by another artist who flaked out on paying for it.

Leese’s bandmate in Heart, Nancy Wilson, ordered a 12-string after she saw his guitar. Carlos Santana, who Smith first met in 1976 but turned down Smith’s offer as he had just started endorsing Yamaha guitars, ordered a guitar in the fall of 1980.

Smith ended up making four guitars for Santana before the guitarist gave his official approval, as Santana thought the first three were “accidents of God” and the fourth finally convinced him that Smith’s guitar-making talents were genuine.

Making a guitar that Carlos Santana would play was Smith’s goal from the very start. “I figured if I could build Carlos a guitar, I’d be made,” Smith said in The PRS Guitar Book by Dave Burrluck. “We couldn’t have done it without his support. He gave my instruments instant credibility, (as did) Howard Leese and Al Di Meola. Their mark of approval was crucial. I guess I had it right.”

Hundreds of artists have joined the ranks of PRS artists since the company was officially established in 1985. Surprisingly, it took 10 years before PRS introduced its very first artist signature guitar – the Carlos Santana model.

The second PRS artist signature guitar – the Mark Tremonti model – followed six years later in 2001. But since then PRS has introduced dozens of artist models, including various Private Stock, Core and SE models, as well as a few acoustics.

MiIn celebration of the 35th anniversary of PRS Guitars, we reached out to 35 PRS artists and asked them to tell us about songs that they recorded using a PRS guitar.

Current page: The origins of PRS