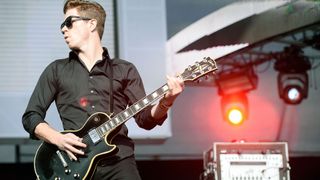 When not scoring the game-winning goal or hitting the game-winning shot, professional athletes are often in hotels or on the road in busses or simply avoiding an often-all-too-rowdy fan base. And what’s the perfect thing to occupy your gobs of free time? No, not video games! Rather, playing the guitar. Don’t believe us? Here are 8 sports stars who are also guitar playing stars.

The American soccer star who made a name for himself at the 1994 World Cup for his dazzling defense and his striking red hair and beard is also an avid guitar player.

Lalas, who has his own home studio, has released seven solo rock ‘n’ roll albums and one more with his college band, The Gypsies, which toured east coast bars on weekends. Later, Lalas toured with Hootie & the Blowfish on a European stretch of shows and, more recently, Lalas released his latest solo record, Look At You, a romping, lick-heavy achievement.

A hero in the hearts of New York Yankee fans, Williams is also a classically trained and Latin Grammy-nominated guitarist. The professional baseball player was as smooth as they come patrolling center field at Yankee Stadium and he displays similar style on his two major label records, The Journey Within and Moving Forward.

Williams, who has worked with legends like Paul McCartney and Bruce Springsteen, plays a combination of jazz, pop and traditional Latin music.

The college standout, who sadly passed away from cancer in 2009, was also a force in the NBA. A former 20-plus-point-per-game scorer, Tisdale retired in 1997 to focus on playing jazz.

Primarily a bass player, the former bruiser released his debut, Power Forward, in 1995 with Motown. His 2001 album, Face to Face, hit the top of the Billboard contemporary jazz chart.

One of the NHL’s top goalies, Lundqvist comes from a family of musicians and is a noted rock guitarist. The award-winning net-minder for the New York Rangers told GQ that he’d recently bought a Hagstrom Tremar Viking Deluxe electric guitar to go with his trusted Fenders and Gibsons.

Lundqvist, who played in the Swedish rock group, Box Play, says he also likes to perform at charity events when the schedule allows.

An expert on the slopes or in the half-pipe, Shaun White has dazzled spectators with Big Air at the X Games and the Olympics. But the talented shredder has also played on the Lallapalooza stage with his dreamy rock group, Bad Things, in which White strums an echoing electric reminiscent of bands like Coldplay.

If the PGA Championship- and British Open-winning golfer hadn’t rocketed to fame with his long drives, cigarettes dangling from his lips and Major awards, the everyday man may have been a hit in Country music.

Either way, he landed in the ear buds of many a music fan. Daly has collaborated with Kid Rock, Darius Rucker and Willie Nelson and he’s released two solo records, My Life in 2002 and I Only Know One Way in 2010.

What do you do when you retire as one of the most famous and beloved tennis players of all time? That’s right! You work with Eric Clapton and Eddie Van Halen to learn guitar and pursue your goal of being a touring musician.

And while he quit that first band in 1997, McEnroe has popped up regularly in clubs over the years to play and pay tribute to heroes like Neil Young and David Bowie.

At its height, baseball is an exciting game. But even the biggest fans know there’s lots of downtime. For starting pitchers, there’s even more downtime between starts. So what did Cy Young Award-winning pitcher, Barry Zito, decide to do? Learn guitar!

He started to teach himself and, later, at the behest of his sister, Zito started to play in her band. Later, in Nashville, the lefty studied the recording business and, in 2017, the new singer-songwriter released his debut EP, No Secrets.

One of the most feared pitchers in baseball in the mid-'90s, “Black Jack” McDowell was a menace on the diamond, playing for teams like the Chicago White Sox and New York Yankees. But the hard-throwing right-hander is also a natural musician.

McDowell, who started playing the six-string at 11-years-old, got his first electric in college. A Gibson man at heart, his favorite axe is a 50’s Gibson TV Special. While he still plays intermittently today, most of McDowell’s music days came during his baseball years when he released albums and toured with his bands, The View and Stickfigure.