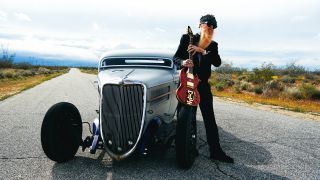 Cars and electric guitars have always been intertwined as closely as the pinstripes on a custom Les Paul. DuPont’s Lake Placid Blue Metallic paint graced both Fender Strats and the starship-like cars of the late '50s, such as the Cadillac Eldorado Brougham.

Yet that was far from the only example of crossover between six-string and four-wheeled worlds, as Robert Johnson’s Terraplane Blues from 1936 attests. The ‘Terraplane’ of the song’s title was an elegant vehicle built by the Hudson Motor Car Company in the same era, making the song an early example of the car cult that later guitarists such as Eddie Cochrane would amplify through rock ’n’ roll hits such as Somethin’ Else.

Guitars and custom cars were, then as now, both symbols of freedom and breathtaking pieces of industrial art. And few men have more feeling for that thrilling connection than Billy F Gibbons of ZZ Top.

Fueled by the band’s prodigious chart successes, Billy has built up a mind-blowing collection of vintage and custom-built guitars, most of which have been used on milestone ZZ recordings - while his outrageous chopped, modded and pinstriped vintage cars often appeared in the band’s videos and album art.

Now, via the pages of a new book, Rock + Roll Gearhead, Billy’s throwing open the doors of his garage to curious visitors. We joined him for a chat about his dual collections and indulged in a personal tour of his most prized custom guitars, many of which share the same design DNA as his hot-rod cars.

What was your first ‘proper’ guitar?

“Sunburst Gibson Melody Maker from 1962. Single cutaway, single pickup. Simple. Straight to the point. Showed up on Christmas Day after turning 13. Ain’t no turning back now!”

You have a superb, ever-growing collection of guitars. Are you still driven to find guitars to fill niches in your music?

“Our curiosity surrounding the many strange creatures in the land of the six-string led us to checking out the personality quirks that lurk beneath the hood of a wide range of electrics. The search remains intact to this day to track the next ‘good one’. Good news is that quality has returned to production. Lots of great stuff off the assembly line.”

Your book features some great shots of your 1955 hardtail ‘La Grange’ Strat. Do you think hardtail Strats have something special going on?

"I’ve learned from many Strat players, noting that distinctive lingering effect from string to string, note to note.”

How did you come to acquire the original ’61 Lil Red SG?

“There was a great four-piece combo, The VanTels, in Houston, three guitars and a drummer. They released an instrumental single, Memo To Maxie, featuring the ’61 Les Paul, known as Lil Red, as the solo instrument.

"We retrieved Lil Red from extinction thanks to our pal, Scott Thompson who tracked it after it showed up in Texas Tom Slaughter’s shop way back when. We’ve enjoyed its Vibrola ghostly driven effect on the ZZ cut Vincent Price Blues.

"The additional incarnation can be seen in the vid-clip, Missin’ Yo’ Kissin when I saddled up with Austin Hanks playing the left-hand, right-hand blackened versions of a modern-day Lil Red.”

You’ve used a few Esquires and Esquire-derived Customs over the years - what does the Esquire offer, in your view, that the Tele doesn’t?

“Simplicity. It’s right down to basics with the Esquire. Single pickup, single cutaway. It gets straight to the point. I’ve conspired to play the upstart Esqy with a couple of pals, namely Brad Paisley and Redd Volkaert, both known for their amazing talents behind the infamous Telecaster, and, at the same time, they too, admire the sheer simplicity of the Esquire. No frills. No nothing except outright ‘get it on’. Nuff said!”

Some of your best-known customs were made by luthier John Bolin. How did you meet him and how did you start working together? Also, what keeps you coming back for more?

“Bolin, yes! The productions from his shop are stunning. It’s a rare opportunity that shows up now and again that brings excellence in artist application to the party. And Bolin Guitars deliver the goods every time.

"Since the casual introduction in Boise, Idaho in 1983, JB always embraces the most challenging and dramatic electric guitar expressions that one might imagine. The prime element underlying the Bolin touch is exacting detail completing the productions. It’s a remarkable talent that tags his stuff as ‘superb’."

He’s made some pretty wild, outrageous stuff for you - have you ever presented him with a guitar-building challenge that even he didn’t know how to approach?

“Well, as mentioned, Bolin actually enjoys getting outside the box. We have taken Bolin deliveries with some of the wackiest examples of a luthier’s surprise attack, doing the so-called ‘impossible’. We’re presently scheming another wave of weird for Mr JB!”

The Axhandle Guitar Works instrument with a two-piece neck separated by a rifle’s flash muzzle really had us scratching our heads. How does it work?

“Haha! In the new book. Gotta check it out. It’s totally functional! Both necks. The flash muzzle separates the two independent, working necks. The headstock segment is fixed and the strings are tuned to a static C6th.

"We took inspiration from Houston’s amazing flat-steel guitarist, Hop Wilson, whose recordings showcase his out-of-bounds tunings. He split the eight strings into a four-and-four tuning, the top half strung to C6 and the lower strings tuned to D.

"In similar fashion, the Axhandle is a two-handed play... ya reach out with the right hand to strike every other measure then, return to regular strumming as the song progresses. It’s a grand time playing one chord throughout.”

“It’s a mad dash to the finish line. Seems when one or the other nears completion, the idea stream flushes a wave of new possibilities. The rigors of the touring trail keeps us enjoying mile after mile trekking down the asphalt when the imagination and creativity run wild.”

Pin-striping looks great on both cars and guitars - who do you think is the best pin- striper around?

“It’s fair to say the mentor of custom-car and hot-rod pinstriping originated in part with the master, Von Dutch. It’s the Von Dutch touch that holds place with a lot of stylistic line draggers around the globe. He’s one of the greats.”

Are there any rare guitars that have so far eluded you that you’d like to have but currently don’t?

“I’m still admiring one of the strangest solidbody electrics, one held by our pal The Edge from U2... That’s the electric the fashion house Gucci commissioned - yes, that Gucci - back in 2000, by bespoke British luthier Mark Nicol.

What’s the best-sounding guitar you own?

Rock + Roll Gearhead by Billy Gibbons with Tom Vickers and photography by David Perry is out now from Motorbooks.

“A custom offering from the artistic talents of Bernard Moix, Switzerland’s leading exponent of cars, guitars and motorcycles. This one was fabricated in the fine tradition of my 1950 Ford ‘Kopperhed.'

“The Neiman Marcus Custom BFG SG... another challenge to the House of JBL. John Bolin took to the task of reimagining a classic as if the history books of Gibson guitars were being rewritten during the wee hours out in Las Vegas.

"The finely terraced mahogany top curves gracefully toward the control knobs, leaving the original 1961 Vibrola tailpiece intact. This design... splashed across the pages of a Neiman Marcus fantasy catalogue. A player’s delight!”

“This is the Bolin Guitars expression of ‘Tuff meets Tiki’; the elegance of a single pickup powering the bamboo body and neck speaks of rustic times. The simplicity of a ‘war club’ design ethic makes it purely primitive. This guitar brought a supercharged aim to the recording direction of the Rhythmeen sessions. Exotic and hypnotic.”

“This is the ’65 California Jaguar that was customized and modified in Fullerton around 1969... the surf-shop-stickered guitar. One bridge pickup, engine-turned metal pickguard shielding onboard, signal-boosting circuitry, and there’s a light-up dial under the strings, which, though visibly pleasing, is totally useless.

"Who’s gonna look at a gauge needle in the heat of a rippin’ moment of madness?! A weird piece in guitar design history. This instrument, acquired in ’73, is heard on three tracks recorded for the Tejas album. Choice axe.”

“From the handwritten notes straight off the desk of none other than Leo Fender comes this intriguing '50s recreation by our notorious Fender freak, Nacho Baños de Valencia in España. Nacho selected a few choice entries from Leo’s files to create this Leo Fender Special and scribed the instructions with Day-Glo ink onto the body of this sensational six-string. This thing is strong! Read the directives carefully... Leo wants it right. And right on it is.”

"The overall body thickness tops the four-inch mark. A wacky treatment of a traditional design... It’s too much.”

A matched Strat and Precision bass were dreamed up for the first ZZ Top video, 'Gimme All Your Lovin,' when headless guitars were making the scene. Stock Fenders were taken off the shelf to the workshop backroom where the headstocks were immediately hacked off! The pinstripes were part of ZZ Top’s fixation on hot-rods, so on went the lines.

"The white finish and tortoiseshell pickguards are pure '60s Fender. How do you tune this thing!? Not exactly playable, but who cares!? This is the movies.”