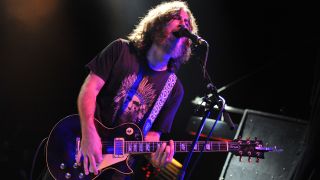 While Black Mountain frontman/guitarist Stephen McBean has been leading the Vancouver-by-way-of-L.A. quintet since their formation in 2004, he hadn’t literally been in the driver’s seat until he got his license in 2017. Yes, the title of Destroyer, the act’s fifth CBD oil-soaked full-length, is a nod to McBean hearing Kiss on the radio in his youth.

But it’s also an ode to ripping it down the highway in a 1985 Dodge Destroyer, a long-discontinued muscle car model he’s been fixing up since becoming street legal. “It’s similar to taking your pedalboard apart and putting it back together in a new configuration - finding which one of those 15 chords is shorting out, and tightening things up,” McBean says, adding that cranking Black Mountain’s latest while gripping the wheel gave him new insight on his songmanship.

“I would take a rough mix, throw it on the iPod and drive around to check the sounds that way. I’d never experienced that before! Obviously I’ve heard a lot of music in cars, but never while driving. It takes you out of [the music] a bit. You have to pay attention to the street signs and all that.”

That’s not to say, however, that the nine-song Destroyer is background music. Horns Arising - an odyssey of stompbox-obliterating stoner riffs and Vallhalla-seeking folk - ranks with the best in the band’s catalog. The Judas Priest-style palm-muting and twin leads on opening cut Future Shade, meanwhile, suggest McBean’s been doing donuts in the Heavy Metal Parking Lot since learning to drive.

“I definitely shunned that as I got into hardcore,” McBean says of the latent influence of the New Wave of British Heavy Metal, now materializing nearly four decades after he delivered primitive, hyper-speed blasts as a pre-teen in his first band, Jerk Ward. “Around that time, I would have been like, ‘You know, Judas Priest seems a little slow,’ but then you go back to certain things.”

Destroyer likewise takes stock of Black Mountain’s past, present and future. After founding drummer Joshua Wells and vocalist Amber Webber departed during the promotion cycle for 2016’s IV, McBean and synth player Jeremy Schmidt wondered whether they should retire the Black Mountain moniker.

Instead, McBean started tracking riffs - chaining together stacks and combo amps - and invited some old friends over to flesh out ideas. “It still conjured the spirit of Black Mountain, so we just ran with it,” he says.