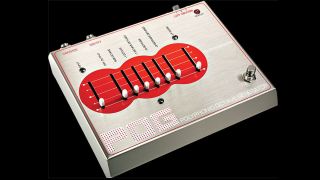 Pitch-shifting units like the Whammy had been around for some time, although their sometimes erratic tracking and alien warble wasn’t suited for all players. Moreover, they weren’t polyphonic, meaning that you couldn’t play chords without getting a mashed, bitcrushed version out the other side.

Meanwhile, in the octaver camp, there had been analogue octavers, like the MXR Blue Box, around for decades, though digital units had the same issue as the Whammy - an artificial-sounding tone, monophonic-only operation, and often lacklustre tracking. Moreover, having more than one active harmony, was limited to rack gear.

The POG blew all of this out of the water when it was introduced in 2005, offering highly granular control over several octave modes, a less ‘artificial’ sounding pitch shift, and a wealth of tone-shaping options centred around an excellent core tone.

Known users included Joe Satriani and Nick Zinner of Yeah Yeah Yeahs, and probably the only thing that stopped it being a runaway success, as opposed to the cult success it became, was its large form-factor, taking up the same slab-size enclosure of many old-school EHX pedals like the Memory Man

Even today, the original pedal stands up, though there are plenty of options should you want an updated model. EHX themselves redesigned the pedal in the form of the POG2, while the compact Micro and Nano versions were arguably the runaway successes that the POG line had been driving towards.

First the Micro, then the even smaller Nano POG brought the core POG tones to those with less pedalboard space, or indeed those that were simply after the bread-and-butter octave modes.

The pedal has just three controls - an upper octave, the sub octave, and the dry signal, but also has dedicated wet and dry outs, allowing you to get up to dual-amp or bass DI shenanigans, should you desire.

The big brother of the POG family. Bringing presets and a much smaller form-factor to the party, the POG2 was a favorite of Battles’ Dave Konopka, amongst many other experimental players.

Though the POG2 may sacrifice the individual controls for detuned upper octaves in exchange for a single slider, this does free up space for a second lower octave, just in case the rumble you require is even lower.

As TC’s Ronseal-esque name suggests, this little pedal gives you up to four octaves in unison: two sub octaves, your dry guitar sound and an octave-up.

It’s extremely straightforward to use, featuring a control for each voice, and the three operating modes mean it can react to a polyphonic input signal, or monophonic in Classic mode, plus a slot for TC’s Toneprint technology.

Unlike the Nano POG, it’s only got a blended single output, but if simple-yet-quality octaves is what you’re after, life’s a pitch with the Sub ‘N’ Up.

Okay, we haven’t exactly got a particular track in mind, but we grew up on the sounds of Satch and Vai playing legato lead parts through a variety of pitch shifters, from the workhorse Whammy to studio-grade Eventide gear.

Luckily, the POG can get us right in the ballpark of the most hair-raising octave lead using a setting like this, with a distortion in front. Adjust the LPF control to tame the upper octaves if need be.

Who needs a bassist?

Bands like Royal Blood and Death from Above 1979 helped to bring two-pieces to the mainstream, but in math and post-rock circles alike, there’s usually a Micro or Nano POG onstage whenever you see a band without a dedicated bassist.

To drop some huge low-end rumble, try a setting like this, and then adjust for your amp and gain setup. Bonus points if you split your signal and send the POG out to a DI, or a bass amp.

OK, so it may not sound quite as convincing as the real thing on record, but this shimmery, pretty sound is perfect for those looking to reproduce their 12-string parts live on a regular guitar.

Replace the detuned octave for the regular octave to create something a lot crisper, but more obviously artificial, or you can double-down on the weird by adding in some of the detuned two octave up sound. 18 string? Don’t mind if we do...