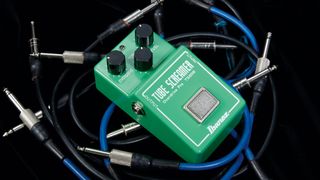 Not only is the Ibanez Tube Screamer the most famous overdrive ever produced, it’s also probably where we get the name ‘overdrive’ from, as the original TS808 model labeled the gain control on the pedal ‘overdrive’. Its origins are interesting - although now Maxon is a company you can buy readily in a guitar shop, back then they were an OEM (original equipment manufacturer) for other brands, in this case Ibanez.

The Tube Screamer circuit was designed by Susumu Tamura, an engineer for Maxon, in 1979. It was conceived as a competitor to the Boss OD-1 and MXR Distortion+, and its op-amp based topology instantly set it apart from transistor and JFET-based designs, as well as fuzzboxes.

To this day, the family tree of Tube Screamer pedals includes most op-amp based drives that use soft clipping in the op-amp’s feedback path - which is to say, almost all overdrive pedals.

The original Ibanez units are rare and coveted, but there are also Maxon units available, which where marketed as the OD-808 and OD-9; these correspond to the two classic Tube Screamers that Maxon produced - the TS-808 and TS-9.

Although Ibanez would continue to build variations of the unit and alter the circuit further for the next 20 years, when people say ‘Tube Screamer’ tone, they’re generally talking about the TS-808 or TS-9 models, and this is reflected by the number of high-profile players that have gravitated towards these units over the years.

Since then, not only has the pedal been cloned to death, it’s been built on and adapted into a huge spread of different forms.

Paul Cochrane’s classic overdrive circuit - now available in a mini enclosure via MXR - is poised to become more accessible than ever. Essentially a streamlined op-amp drive with less compression than a Tube Screamer, a dual-cut EQ and no ‘mid-hump’, the Timmy is ideal for low-gain drive sounds or using as a boost to drive a tube amp into saturation.

The two main influences on the coveted King Of Tone are the Tube Screamer and the Marshall Bluesbreaker pedal, and for all its component changes and rare diodes, the biggest changes to the tone are the EQ - like the Timmy, an absence of the mid hump - and increased headroom. You can hear the difference in diodes, but it’s a marginal change in the grander scheme of things.

If you’re not after lots of clipping, but mainly want to use the Tube Screamer as a boost, then there have been a number of versions of the circuit created by the DIY community over the years. Amongst the best is Jack Orman’s TS circuit, which repurposes it as a boost. The Very Thing is very closely based on this design, should you not want to build your own.

Get the tone #1: metal boost

For everything from grunge to modern tech-metal, you need your amp working overtime. This setting dials back the pedal gain and uses the huge volume tap on offer from the Tube Screamer to coax more gain out of the amp, which you want to have running on the gain channel. You’ll likely want to roll off some bass off your amp to stop it getting ‘woofy’.

Get the tone #2: blues tone

Rolling back the treble at either the guitar or the pedal, and using a combination of amp and pedal saturation to get a resonant, ‘singing’ lead is perhaps the Tube Screamer’s quintessential setting. Through our single-ended 5W test amp, we found this to be an effective setting, with the guitar’s tone pot wide open and on the neck pickup.

Get the tone #3: saturated rhythm tone

Although not that many people use its drive wide open, the Tube Screamer has a surprising amount of distortion on offer when it’s maxed out. Into a solid-state amp this can sound a little bit thin, but into a tube amp, carefully dialing in the level control can result in a thick, powerful rhythm tone.