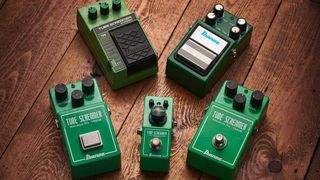 In the hard-rock era of the '70s, the sound of overdriven Marshall stacks filled stadiums around the globe – and terrified the parents and neighbours of bedroom guitarists everywhere.

These were the good old days of LOUD, when tone equalled eardrum-splitting volume and hard-rocking guitar players were, for better or worse, anti-social by nature.

Hot on the trail of a more practical and less quarrelsome solution, amp designers on both sides of the Atlantic increasingly looked towards providing rock guitarists with the option of valve distortion at lower volume.

In the US, during the early '70s, Mesa Engineering’s Randall Smith provided his answer with the Boogie/Mark I amp’s cascading preamp gain, while in England, Marshall’s Steve Grindrod developed the company’s first ‘master volume’ model, the 2203, in 1975.

Meanwhile in Japan, the first of Roland’s Boss pedals, the CE-1 Chorus Ensemble hit the effects market in 1976, and by the following year the term ‘overdrive’ had well and truly been coined by Boss with the OD-1 Over Drive.

Boasting valve-like asymmetrical clipping, it was an immediate success as guitar players suddenly found they had the world of overdrive placed conveniently at their feet, regardless of which amplifier they happened to be plugged into.

With a circuit closely resembling the Boss OD-1 (albeit featuring symmetrical clipping and a tone control), the Maxon OD-808/Ibanez TS-808 originated from the Nisshin Onpa firm – an original equipment manufacturer (OEM) of guitar pickups and electronics – and was the brainchild of engineer Susumu Tamura.

The design was unveiled in 1979 and was aimed at the domestic Japanese market under its own Maxon brand as the OD-808 Overdrive, while Nisshin’s customer, the Hoshino Gakki company, cornered the overseas market with the circuit in the guise of its Ibanez-branded TS-808 Tube Screamer Overdrive Pro.

Available from 1979 to 1981, this first incarnation of the Tube Screamer is considered by many to be the Holy Grail of overdrive pedals, with prices on today’s vintage market easily fetching several hundred pounds.

During 1979, a rare variation of the TS-808 with a narrower enclosure was made for a short while. This pedal originally utilized a pair of 1458 chips and was reissued by Ibanez in 2014 as the TS-808 35th Anniversary featuring the fabled JRC4558D chip. JRC4558Ds were commonplace in the wider-enclosure TS-808s, with rarer versions employing RC4558P and TL4558P chips in the circuit.

All TS-808s can be distinguished by their small rectangular metal footswitches. In 1982, the design was revamped for the 9 Series Maxon/Ibanez compact effects pedal ranges. Repackaged as the Maxon OD-9 Overdrive and Ibanez TS9 Tube Screamer, the schematic remained relatively unchanged, with the notable exception of output resistor values (to reduce unwanted noise).

Although the unit retained its distinctive green color, the small 808-style switch was replaced by a large rectangular type. By 1985, the 9 Series was discontinued, and the circuit temporarily fell out of production. In 1986, a new variation closely resembling the original circuit was introduced in the form of the TS10 Tube Screamer Classic as part of Ibanez’s extensive Power Series aka 10-series.

Although TS10s are sought after by some, for others, their cheaper and less sturdy construction sets them apart from earlier varieties – although this didn’t appear to stop Stevie Ray Vaughan making good use of them!

Why was the Tube Screamer so instrumental in the early days of boutique pedal building?

“I started out selling vintage guitars and effects in Japan. In the 90s, a lot of effects were constructed poorly, and the sound wasn’t very good, so people were looking to vintage effects to get the best sound. Analog Man started out by modifying Tube Screamers using TS-808 specs with parts that I got when I was over in Japan.

“Before the internet you couldn’t just go online and find parts – you had to go and actually search them out. Ultimately, I was able to find those parts in Japan and start modding Tube Screamers properly.

“Tube Screamers have been popular for quite some time and they were one of the most popular pedals when I got into the business. I was able to buy them pretty cheap back in the 90s before people realised how valuable they were getting, but then even the pawnshops caught on! There were no reissues available back then, so the TS9s were pretty valuable, too.”

“The Tube Screamer was a fairly unique design, although I do believe the Boss OD-1 Over Drive came out before it [in 1977] and it’s a very similar circuit. The Tube Screamer gives you a nice boost and a nice warm midrange, which works especially well in Fender amps. They have a good amount of compression and they also tighten up a lot of amps.

“A lot of amps, especially when they’re loud, will have excessive low-end and it really doesn’t sound good with a band – a Tube Screamer will tighten up that low-end really nicely, so it sits well in the mix.

“A lot of people think that they want a pedal with a lot of bottom-end, and when you’re playing on your own at home at low volume that might sound okay, but when you start getting the amp louder and you’re playing in a band situation, it’s probably not something that you want.”

“Honestly, I had no idea what I was doing to begin with. It probably started with the ‘Silverface’ Twins I stumbled upon aged about 16. I’d seen pictures of SRV with Fender amps that looked similar and – given that I was 16 and ‘knew everything’ – I thought it was all down to these behemoth 70s clean monsters, as opposed to a beautiful 60s Vibroverb!

“Nevertheless, I plugged the Strat into the Vibrato channel, flicked the Bright switch on, turned it up and… Ouch! One trip to the music store later, a used Boss OD-1 and a new SD-1 improved things no end. Until somebody finally pointed out the little green box at Stevie’s feet.

“Since then I’ve become accustomed to 50 percent of guitar players telling me they hate Tube Screamers, while the other 50 per cent would never be without one. If you live in my world of vintage-style Strats and predominantly black-panel-derived amps, something TS-flavored is basically essential.

“That characteristic 500 to 800Hz hump fattens things where a Strat loves it, but the bass roll-off and lack of drive in the lowest frequencies keeps it all clear and defined – which is what you need when your amp starts to flub out in the low-end.

“At the opposite end, a marked treble roll off meant the old Twin’s Bright switch was rendered less unpleasant while the pedal’s compression – that simply doesn’t work for a lot of humbucker-and-crunchy-amp people – is exactly what the clean, strident Fender amp needed to make it feel a bit more forgiving.

“All I had to do now was tune to Eb and that weak-sounding Strat was transformed into a sledgehammer. Placed as a boost after a decent Fuzz Face, the TS made it borderline god-like.

“Years later, I’ve often wondered if what I was actually chasing was simply the sound and feel of a Strat plugged into a semi-dimed Plexi. Either way, the Tube Screamer was, is and hopefully always will be a rite of passage: an essential piece of the tonal tool kit as you learn what lights you up and what leaves you cold. Thank you, Mr Tamura, and thank you, Tube Screamer. You have truly helped to make me who I am.”

The brains behind Maxon and Ibanez's legendary design reveals the past, present and future of overdrive

“The first pedal I designed was a phase shifter – it was sold as the Phase Tone PT-999 under both the Maxon and Ibanez brands. The PT-999 circuit design was inspired by the MXR Phase 90 and consisted of only three operational amplifiers so that many players could use it at a reasonable price.”

What’s your best-selling pedal and why do you think that is?

“The best-selling pedals I’ve designed are overdrives such as the Maxon OD-808 Overdrive and the Ibanez TS-808 Tube Screamer. To say that the Tube Screamer is synonymous with the term ‘overdrive’ would not be an exaggeration.

“You could also say that a majority of overdrive pedals on the market are based on the Tube Screamer/Overdrive circuit. Regardless of the genre of music, though, I think that the overdrive sound expected by both the player and the audience can be easily attained with these pedals.”

“Before the release of the OD-808/TS-808, distortion circuits had a separate clipping stage that came after the amplifier stage of the circuit. OD-808/TS-808 was the first circuit to incorporate the clipping stage in the negative feedback loop of the operational amplifier. This configuration yields a smoother distortion that retains the original guitar tone.

“After more than 40 years since its release, many clones of Ibanez Tube Screamer and Maxon Overdrive and many overdrives derived from the Tube Screamer have been released and sold. It is undoubted that the original design was unique yet also simple.”

What’s your favourite vintage pedal? And can you explain why?

“My favourite vintage pedal is the OD-808/TS-808 with the ‘caramel’ switch manufactured in 1980/1981. It has a simple circuit configuration, which consisted of easily available parts.

“The OD-808/TS-808 has been used by musicians across various musical genres for over 40 years since its release, and many reissue models have been released over the years.

“There have also been many TS-cloned products and derivative products released by different companies over the years. It is one of the most copied pedal designs of all time.”

If you had a three-pedal ‘desert island’ pedalboard what would be on it?

Are there any long-lost Maxon gems that you think would be worth reissuing?

“I would like to reissue a version of the [1980s] Maxon DCP series vintage pedals – DCP stands for Digitally Controlled Processor. The Maxon DCP series was expensive at the time and did not sell well.

“I see original DCP pedals on social networks and markets these days, but I definitely want to reissue the [POD1] Overdrive/Distortion and [PDS1] Distortion DCP models. The DCP series was a wonderful product that controlled 100 percent analogue audio with digital circuits instead of using DSP to simulate analogue circuits.

“Furthermore, multiple control settings could be stored and instantly recalled. Basically, these products offered the best of both worlds with analogue audio and digital control.