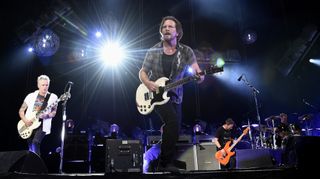 All of us at Guitar World are, naturally, total guitar music nerds, so compiling our favorite tracks of the week tends to be one of the best parts of our job.

This one was a bit difficult, as this week seemed to have everything. From a solo-drenched epic from the Prince of Darkness himself, to a twangy, genre-bending earworm from indie favorites Waxahatachee, six-string thrills were easy to find on all fronts.

If you're looking for some guitar-heavy playlist additions from a range of styles, look no further...

Ozzy Osbourne - All My Life

The Prince of Darkness, and one of heavy metal's most revered figures, today released his latest (and last?) album, Ordinary Man. Despite the much-publicized off-piste collaborations (Post Malone? Travis Scott?!), the record features fiery fretwork from guitarist and record producer Andrew Watt, with some notable appearances from none other than Slash.

The sheer volume of rapid-fire riffs and licks makes it difficult to choose out a standout six-string track, but All My Life appears to have it all: 12-string acoustic guitar in the intro and verses, a catchy chorus riff and multiple guitar solos (the second of which is suitably wah-drenched).

After roaring opener Straight to Hell, All My Life doubles down, kicks the album up a gear, and thrusts Watt into guitar's big leagues. (SR)

After something of a New Wave left-turn with Dance of the Clairvoyants, Pearl Jam showed they can still deliver the straight-ahead radio rock goods with a track characterized by raw, Andy Gill-esque guitar stabs and driving rhythms.

That Katie Crutchfield writes the sort of songs that immediately stop you in your tracks is as immovable a fact of life as the sun rising each morning. Though it's free of the post-breakup clouds that drenched 2017's stunning Out in the Storm, Lillacs is no less powerful a composition.

With guitars that are equal parts Laurel Canyon, Nashville and the warmth of your favorite college radio station, Lilacs bursts from your speakers, a perfectly measured rocker that'll leave you dying for warmer temperatures and open car windows. (JM)

Crown Lands - Spit It Out

We need to talk about that fuzz tone: it helps that the Canadian duo’s latest single is led by a blues riff so gnarly, it might just propel guitarist Kevin Comeau to Jack White and Dan Auerbach levels of blues-rock stardom.

Major props to Comeau for simultaneously handling a Led Zep-esque slide chorus on his triple-humbucker SG while grappling with old-school bass pedals, too. (MAB)

This Newcastle upon Tyne-based quintet is a relative newcomer to the world of melodic hardcore. However, they've crafted a sound that comfortably stands up to the genre's most well-established names.

The guitars - recorded using a Fender Jim Root Jazzmaster and Fender Tele both run through a Peavey 5150 but split into a Marshall and THD cab, respectively - lock in tightly with the kick drum to create an ultra-precise but satisfyingly chaotic section that's certain to get the pit moving. (SR)

Jenn Wasner is one of 21st-century guitar’s most enigmatic players, using dramatically altered tunings on her signature Reverend to conjure parts that are as memorable as they are inventive.

Walk Soft harks back to the band’s early days, before Wasner split her time between wistful guitar and uptempo synths, with a woozy, vibrato-laden rhythm tone laying the bedrock for the track’s beautifully orchestrated dynamic shifts. (MAB)

You can read how it was put together in our interview with mastermind Roopam Garg. (MAB)

Though one probably comes to his music for the songcraft, his acoustic playing on this record - which is buoyed by two dazzling instrumentals - is positively superb. The latter of the two, For Ichiro, is underpinned by a gorgeous acoustic figure that is an absolute treat to get lost in. (JM)

FULL DISCLOSURE: This is MAB’s own project, but we thought you guys might dig hearing some music made by GW staff.

Either that, or it’s a shameless act of self-promotion - depends whether you dig this homage to ’90s alt-rock heroes like Thayil, Corgan, Cantrell and Morello, complete with first-take, improvised solos, as well as copious Whammy use and riffs aplenty.

Whichever way you take it, thanks for listening (and many apologies, too). You can direct any complaints to Maebe on Facebook and Instagram. (MAB)