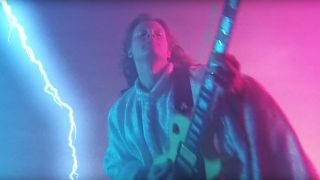 “Story-telling is exactly what we’re trying to do,” explains Hällas guitarist Marcus Pettersson, talking to Guitar World with co-guitarist Alexander Moraitis. If you’ve seen the Swedish progressive rock quintet’s video for recent single Tears Of A Traitor, you’ll definitely know what he means - with neon colors, astral projections and a medieval knight brandishing a giant sword that’s also able to communicate with lightning.

“It spans over three albums,” he continues. “It’s about the ninth Hällas who is on a quest for answers. Basically, he wants to find out the meaning to life. He needs to find an all-knowing seer who can control the universe, the future and the past, just by using stars. That’s the main story. It’s set in the lands of Semyra…”

“That was the basis for the music,” notes Moraitis. “So on this album, we started with the plot and then made riffs that would fit the narrative. It was more of a soundtrack approach. We want listeners to hear the emotion we’re trying to tell even without any lyrics.”

Pronounced ‘hellas’, the retro quintet signed with Austrian independent Napalm Records at the start of this year for the worldwide release of latest album Conundrum – labelled as the new chapter in their adventure rock saga. Here the band’s two guitarists speak about their musical journey so far and the progressive rock, cinematic and video game influences at play…

You guys clearly listen to a lot of '70s music… who are the main influences?

Marcus: “For me, it’s Rush, Genesis and Camel - at least out of the more progressive ones. As for guitar heroes, I’ve never really felt like I’ve had anyone I’ve tried to sound like. Maybe it changes from album to album, I’d probably say my favorite soloist is Chris Holmes from WASP - so maybe it’s a good thing I do barely any solos in Hällas ha ha! Alex Lifeson, of course, is another one. We were both really sad when Neil Peart passed away... we never got to see them live.”

Alexander: “Those prog-rock bands were important for me as well, of course. I like a lot of Italian bands, though I tend not to remember the names of the guitar players. There’s quite a few like Banco del Mutuo Soccorso.

"Goblin are the best, I think. I guess in terms of who I try to steal as much from as possible, it would be Andy LaRocque from King Diamond and Glen Tipton from Judas Priest, at least when it comes to soloing. It’s much harder to answer that question for actual composing, though! We have a lot of influences.”

Marcus: “I also listen to a lot of black metal, which can be progressive too. It’s not so much of a verse-chorus-verse build to the songs… they kinda float. Bands like Ulver, Satyricon, even some Immortal from time to time.”

And when it comes to conceptual albums, which ones have left their mark on you most?

Alexander: “It’s not really progressive, but I would say Abigail by King Diamond.”

Marcus: “That’s a great one. As well as Selling England By The Pound by Genesis. I also love The Crimson Idol by Wasp. Again, it’s not progressive but it’s a great album and concept. 2112 by Rush is the classic space album, of course.”

You are based around Linköping, which is the same city as Ghost. What is the music scene like there?

Marcus: “We don’t really know the Ghost guys. I guess we used to see them around but they’re a bit older than we are, so we never crossed paths really. But as for a scene, so to speak, there isn’t really anywhere to play. There’s no venue with bands coming over, but we still have some underground bands like Night who I think are really good. There’s not much happening over here, really.”

What equipment do you use to get those vintage tones?

Marcus: “On both albums, I’ve used an Asian copy of a '55 Gibson that sounds great, fitted with P-90 pickups. On my Marshall JCM900, everything was on zero except for volume and mids. There were no effects, really. We used a lot of volume to get the distortion.

Alexander: “On our previous record, I played on [singer/bassist] Tommy’s SG, which is another Japanese copy. That went into a Fender combo of some sort. Then on this album I decided to switch to a Fender Stratocaster through a JCM800…”

Marcus: “I’ve always liked the combination of a Les Paul and a Fender, they really compliment each other. Though, to be honest, I’ve grown tired of single-coils and P-90s. They’re just way too noisy when we play live. So those guitars are mainly for recording and that’s it.”

And how about treating and mixing these more old-school sounds?

Alexander: “Our synth guy also mixed the album, he’s more technical when it comes to mixing and microphones. Try not to use too much distortion, that’s the main thing…”

Marcus: “It’s key. Also, when you record something you have to imagine it in the mix and make sure it sounds good for that. You need the right kind of distortion, thinking of it more like the sound coming into the microphone than the sound coming out of the amplifier.”

How much does music theory play a part in your compositions?

Alexander: “We don’t think about theory at all. We read a lot of tablatures when we were younger, learning how to play the rock songs we liked at the time. For me, in the beginning it was a lot of Slayer, but I often found it too difficult to learn a whole song so it would end up being a riff here and a riff there. That’s how it all started.”

Marcus: “We like to go between major and minor a lot. We also very rarely play the same part - one of us will play a normal rock power chord, the lower notes, and the other will play the higher notes or the same chord elsewhere. That inspires a lot of the melodies that we place on top.”

And for odd-time signatures, is there a method of linking parts together?

Alexander: “That takes a bit of thought, actually. There have been many times during a rehearsal where we’ve sat down to solve riffs like a math problem. We ask ourselves how can we fit these two chords together in a good way or transit to the next part. We let it sink a bit, try out some stuff and just like that, it clicks.”

Strider is a very bluesy song, yet more keyboard-led than most of the other songs…

Marcus: “That song was mostly written by Nicklas, our keyboard player. I remember me and Alex were wanting to write a song with no guitars at all - we were really striving for a synth song. But Nicklas wanted some guitars in there, so we did the basic minimum and let the synthesizer take the main part.

"It was actually a very special instrument - a version of the GX-1 of which there are only 10 in the world. We didn’t want to ruin that with guitars…”

Alexander: “It was also harder to do things with guitars on that track. Nothing seemed to do it justice so we kept them sparse and in the background of the song.”

What kind of '80s movies inspired your video for Tears Of A Traitor?

Marcus: “It’s our take on old movies like Excalibur and Conan. And we needed to incorporate space within that too… so Excalibur In Space is what you get!”

Alexander: “Conan is a really good example. It has such a weird aesthetic. I think we said to the video director it needed to have a lot of smoke. That was the main thing we wanted!”

And how about video games?

Marcus: “I loved the old RPGs like Ultima, Ultima Blind and then Secret Of Mana on the Super Nintendo, plus newer ones like Skyrim. It’s all influenced us in ways. I guess we’re all about the nerdy things in life. We play board games and read a lot of sci-fi books too...”

Alexander: “Right now, I just started reading the Blade Runner book Do Androids Dream Of Electric Sheep? I’ve only seen the movie, so we’ll see if it’s as good. I like reading about real science too, as much as the fiction.”