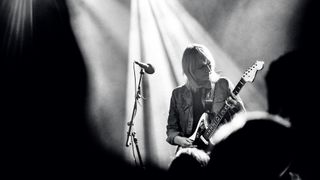 It would have been easy for guitarist Katie Harkin - or just Harkin, as she’s best known - to turn her debut solo album into a showcase of riffs, solos and powerchords.

A professional musician since her teens, she’s lent her talents to the likes of Wild Beasts, Flock of Dimes, Kurt Vile and Courtney Barnett, and of course Sleater-Kinney, with whom she recently completed a European tour, pulling double-duty as band member and opening act.

When it came time to shine on her own, however, she turned the spotlight toward her songwriting. Harkin, released on the Hand Mirror label, which she launched with her partner, poet Kate Leah Hewett, is a 10-song effort featuring plenty of guitar work, richly layered in soundscapes and heavy on textures and effects.

“It’s something I’ve been working on for a number of years, and I wanted to be able to do it without any compromise whatsoever,” she says.

The album was recorded over the course of 16 non-consecutive days in three locations: Seahorse Sound in Los Angeles, Tesla Studios in Sheffield, UK, and Sonic Youth’s Echo Canyon West in Hoboken, New Jersey.

“It really is as nomadic as I’ve been,” she says. “I didn’t want it to feel overcooked, so I didn’t take the sessions home with me. I didn’t endlessly noodle with it in Pro Tools.

“I kept it to those days, so I had these hard drives that I was clinging onto for dear life as they traveled around with me.”

She tracked with a Reverend Tricky Gomez 290 and a Fender TC 90, which she uses onstage with her bands and with Sleater-Kinney. “It’s a guitar I’ve clung to for a very long time for its portability and power,” she says.

Both guitars are semi-hollow bodies and have P-90s, her pickups of preference. “I’ve been playing guitar long enough to know that if something has P-90s, it sounds more like me,” she says. “I could get lost in a technical wormhole, but I think there are some things in the development of your taste that you don’t necessarily need to question too much.”

Harkin’s career has been one of collaborations, which have strengthened her on the journey leading to this moment. “Having people that you respect put their faith in you is incredibly galvanizing,” she says. “It has given me a huge amount of confidence and definitely been a help to get me where I am now.”