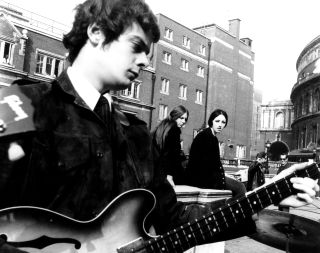 Paul Samwell-Smith’s career has largely been spent behind the mixing desk as a hugely successful engineer and producer, but he is also acclaimed as a founding member of the Yardbirds.

Back in 1963, it wasn’t the done thing to both play in the band and also have responsibility for the recordings; indeed, there were still recording studio staff wearing lab coats. But Samwell-Smith was always one to buck the trend, not least in his dapper, well-groomed appearance - which contrasted hugely with the longer haired, scruffier look of his contemporaries.

Because of his production work with a host of enormous stars from Carly Simon to Chris de Burgh, Samwell-Smith’s bass-playing can be something of an afterthought. However, there are some absolutely stunning moments to be found during that truncated performing career. Wielding a short-scale Epiphone Rivoli, he influenced the styles of Dennis Dunaway and others, including Billy Sheehan.

An excellent starting point if we want to unpack some of his bass work is the 1964 live album, Five Live Yardbirds. Not only is the record an outstanding time capsule of the rhythm and blues scene, it captures the excitement and energy of the band themselves.

Samwell-Smith’s solid and fluid work on Howlin’ Wolf’s classic ‘Smokestack Lightning’ keeps things rocking along in full blues/mod mode, and he proves he can do the super-speedy stuff, too, with the bustling pentatonic runs of ‘Here ‘Tis’; there’s technique to spare on both. Rough and ready, but tight as hell, the band are absolutely hammering it home throughout the LP.

The blues-rock chops are evident on the 1965 US release, Having A Rave Up With The Yardbirds. The album is famous for introducing new guitarist Jeff Beck alongside Eric Clapton, who was soon to leave the group.

Paul is most prominent, bass-wise, on the ace cover of You’re A Better Man Than I, one of the highlights of a patchy record - although it also produced the excellent ‘Evil Hearted You’, which was memorably covered a couple of decades later by the Pixies.

The Yardbirds were now beginning to write more original music, with Samwell-Smith co-writing Still I’m Sad with drummer Jim McCarty, an odd little piece on which the bassist is content to follow the drum rhythm underneath Gregorian chanting and some plaintive, sensitive, love-lorn lyrics that he wrote.

Another chant-drone was to be heard on Turn Into Earth, with the arrangement again written by the bassist. Elements of raga permeate both, as was the fashion in those days.

By now, his focus was moving more and more toward that producer’s seat; the touring-recording-touring treadmill is not for everyone. Samwell-Smith’s last Yardbirds LP as a player was Yardbirds (Roger The Engineer). Samwell-Smith shared production credits with the band’s manager, Simon Napier-Bell; the LP was in part named after the recording engineer, Roger Cameron, a suitably grotesque sketch of whom by rhythm guitarist Chris Dreja graced the cover.

"Paul Samwell-Smith was one of my first influences as a bass player. He had an Epiphone Rivoli bass with black nylon tapewound strings - a duplicate of which I have at my home right now. It sounds just like the bass on the album: the strings have a really cool, unique tone to them. The bass has this deep low end because of the neck pickup.”

The album is sometimes known as Over, Under, Sideways, Down in tribute to the track of the same name, part British Invasion R&B, but with neo-Indian noodling about on top. The bass player enjoys himself with an arpeggio figure in the verses before it gets psychedelic and rootsy in the choruses.

That was more or less it for PS-S as aplayer, aside from a few guest appearances, including on Manfred Mann singer Paul Jones’ And The Sun Will Shine single, alongside Jeff Beck on guitar and one Paul McCartney on drums. It wasn’t until 1983 that he restrung that Epiphone, linking up once more with Dreja and McCarty for the Box Of Frogs project.

The trio added John Fiddler as vocalist and the Yardbirds sort-of-reunion was complete, with Beck guesting on the self-titled 1984 album, then Jimmy Page soaring around on 1986’s follow-up, Strange Land. After that, the Frogs croaked and were heard no more.

As a bassist, Paul Samwell-Smith was solid and occasionally prominently inventive. No doubt, had he stuck to that he’d have been feted as an influence by many. However, given that his credits also include a co-production with Paul Simon, the movie Postcards From The Edge and massively successful LPs by Jethro Tull, All About Eve and Cat Stevens, we reckon his move into studio work was a good call.