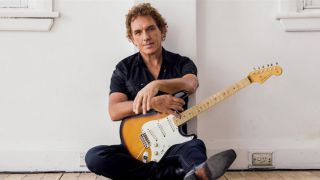 Getting a hold of Ian Moss is neither as easy, nor as difficult as one would expect. He’s more than happy to chat your ears off, but only if you manage to find him – our first calls wound up going straight to voicemail, and Moss’ management had no idea where the elusive Cold Chisel guitarist was. When our second attempt rolled around, it turned out Mossy had double-booked himself with a dentist’s appointment – no, sadly, we did not interview him high on nitrous... Maybe one day. It wasn’t until our fifth attempt at reaching the Alice Springs-native icon that he picked up – but when he did, he was in an especially chipper mood.

The 64-year old is enjoying a rush of creative energy at the moment: in addition to celebrating the 30th birthday of his debut solo album – the rollicking, ever-relevant cultural milestone that is Matchbook – he’s still riding high on the tail of last year’s self-titled solo album (his first LP of all original material in 22 years), and hashing through a mountain of ideas for both a new solo offering and a ninth Cold Chisel LP. Of course, we were deadset on picking his brain about all of that – and some of the very interesting guitars he’s accumulated for himself over the years.

So, what’s going on in your world today?
I’ve been recording some new Cold Chisel material, actually. We’re just about finished that now. We’re not sure what we’re going to do with any of it yet, but we’ve got a bunch of brand new songs recorded. I got to try out the various guitars I have... I think we gave a few of them a good run today. I’ve been playing a lot on an acoustic guitar lately, so it’s been good to get into the studio and get a blast of electrics.

Are you working towards a new album with Cold Chisel, or just getting some ideas out?
We’re playing around with the idea of doing a new Cold Chisel record. Everyone is still waiting to decide on what they want to do next – if they want to do something next – but in the meantime, yeah, it’s good to get the ideas in your head recorded and have some stuff ready to go. If we get to a situation where people say, “No, I don’t want to do another Cold Chisel record,” then y’know, there’s there’s some great songs there that I’d happily snap up for the next Ian Moss record.

I put my self-titled solo album out last March, which was a very electric album – that was my first electric album of original material in a long, long time, so I’m keen to get on with things and start the process of doing another album before time fizzles away too quickly – as it well can do!

Do you think we’ll hear some of that new material before the year’s end?
Well, I’ve only just started electing songs and writing for my own album, so not this year. It won’t be in the first half of next year, either, so I suppose stand by from July 2020 onwards! In the meantime, I’m still loving my self-titled album and we’ve still got some great opportunities to take advantage of.

The album holds up shockingly well in 2019. You can still flick over to Triple M at primetime and hear “Tucker’s Daughter”. Were you thinking much about the longevity of the album when you were writing it?
Well, when you have an idea for a song, you’re not thinking, “I wonder if this will be popular in 30 years.” That’s something you might think about after you’ve finished it and you put it out, but when you’re writing, all you’re focussed on is trying to make a good record, or make a song work. But in the back of your mind, you realise that it’s important to get the writing process right because you want that song to stick in people’s heads for as long as possible.

So what was it that you wanted to channel into your songwriting on Matchbook?
For me, it was all about wanting to be a pop artist – knowing that that means good melodies and catchy lyrics – but still maintaining my contact to blues and heavy rock. I considered myself a kind of blues-based guitarist who liked his heavier rock, and I considered myself more of a soul singer than a rock singer – y’know, I liked to pin myself up more at the Sam Cooke end of things rather than the Robert Plant end. So I wanted to keep that intact – I wanted to keep the hat permanently tipped towards blues and soul – while writing catchy pop songs and making hits.

Do you remember what guitars you were recording with?
Not many! It’s only in recent years that I’ve suddenly quadrupled my guitar collection to about ten (one of Moss’ mates pipes up in the background: “I think it’s more like 30!”). When I did the Matchbook album, it was all pretty much the one Strat that I carried around with me everywhere. Any photo taken of me playing live at the time, I’d be playing this one Stratocaster. It was a bit of a mongrel – it was a hybrid with EMG pickups in it – and I swore by that guitar like nothing else.

What was it about the Mongrelcaster that you were so enraptured by?
I don’t know, Matt – it just seemed to work. It seemed right at the time. The EMGs were great from the point of view that they were consistent and they were noiseless; it can always be a bit of a worry when you’re going into all different venues with single-bolt pickups. The pub-rock scene was still very strong back then – we would go out and tour six nights a week back in ’89, so we were always running into venues where we’d have problems with the older wiring in their PA systems. So it was good to just eliminate that problem – I was able to know that it wouldn’t be an issue for me and I could just focus on delivering a good show.

I’ve moved on and changed my outlook on pickups now, but I still listen back on recordings from that time and say, “Y’know what? That’s a good sound!” I’d talked to a lot of my peers and they’d go, “Ian, how do you put up with those EMGs? They’re not authentic Strat pickups!” But then they would see that those pickups, in that particular guitar, just sounded good! Guitar players are notorious for finding something they love – a new guitar, new pickups, new pedals, a new amplifier, whatever – and then three or four months later going, “Ahhhhh, maybe it would be better if I did this.” You keep going around and around in circles.

So what are your current gear obsessions?
My current guitar is a Stratocaster built by Sydney luthier Greg Fryer. It’s a beautiful piece of work – I built it back around ’89, 1990, and I didn’t like it for about ten years. But then when I was in one of my ‘ah, I need to find something different’ phases, I pulled it out and thought, “Wow, this guitar is just beautiful.” Maybe the pickups that I had in it were the problem; I started messing around with different pickups, and now it’s my favourite guitar, for sure. It’s got a slightly wider-scale neck than most Strats, which I really like as well. And I’m really happy with another fantastic Australian builder, Rod McQueen – he’s in Sydney, and he builds these pickups that he calls Sliders, and I’ve got a set of those pickups in it.

There are a couple of others – Eric Johnson made me a sunburst Stratocaster, which is really great as well; the only thing he had to do with that was replace the frets, because they were too small and too low for me, but otherwise, that’s just a stock-standard Strat. And then all of my other guitars are... Well, not weird, but maybe eccentric.

I’ve got two Telecasters that are not necessarily Telecasters; one of them is another mongrel that was built by a luthier named Robert Peters back in the ‘70s. There was this spare parts company called Schecter, who brought out all these different necks and bodies, and they had all of these exotic timbers. So I bought a couple of bodies in this timber called African walnut, which weighs a tonne – our heads were still stuck a bit in Spinal Tap land, we were like, “Yeah, get a guitar with some dense timber and you’ll get lots of sustain! Sustain forevah!” But funnily enough, one of the two guitars I built out of that – a Stratocaster – it had lots of sustain but it sounded horribly thin, because the body was just too dense to resonate.

Somehow with the Telecaster, it actually turned out really well. So I ended up with this Telecaster that just roars – it’s incredible! It’s something that always draws comments from peers, anywhere I go. They’re like, “Wow! What’s that guitar? What’s in that?” So I’ve got that one, and then I’ve got one which started off as a Japanese Profile Telecaster; I don’t know what happened to the neck, but once again, Robert Peters had a spare Strat neck lying around, so we joined them up and routed out the Telecaster body to take a whole Strat setup – Strat pickups and the Strat tremolo system – so now, I fondly call it the Strele.