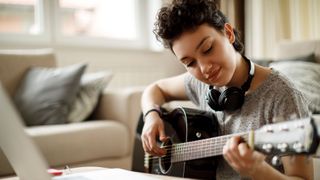 It is 9pm. I am fully naked and stood at my kitchen sink, washing my hands, for the third time. I have just been grocery shopping. Taking your clothes off after shopping is almost certainly overkill, but what has become achingly apparent to me lately is that when people are presented with change, our response is not always 100% rational.

At present, there is a real threat to our biological, mental and economic wellbeing, but it is compounded by the rapid upheaval in our lifestyle and the removal of certain comforts. It leaves us feeling exposed, scrabbling for control and, occasionally, getting our butts out after shopping trips.

It is at times like these that our hobbies can seem, quite rightly, suddenly less important. And, yet, above all else, it is the guitar and playing and listening to music that seems to be proving most valuable to me in how I process the current upheaval.

The way the human mind adapts to deal with the new and different will, I think, be familiar to all guitarists. As players, we get comfortable, we get lazy and our playing plateaus for a while, we start to fall out of love with it. Then, suddenly, some shock or impetus - your first gig, a big show, a record, another player - forces us to push our abilities and we start to try again.

We get it wrong. We get frustrated. We get annoyed. We get sad. We make a long series of mistakes and wrong turns. We are tempted to give-up altogether (Viv Albertine and Keith Levene call these “guitar depressions”, which feels about right), but nonetheless we persist, and then somehow an answer comes. We adapt and advance.

Musicians - while among the worst hit, economically - at least have an outlet, a framework to evaluate the current sense of upheaval. When I can steal time at home during the day – sandwiched between childcare and transcription – I reach for the nylon-string guitar I keep near my desk. It was aged by its previous owner, a no doubt more-accomplished classical player, and already sounded like it’s mids had been punched-out when I bought it, but it is my favorite guitar.

I only get five or 10 minute bursts right now - and it almost always includes a bastardized version of Dylan’s Boots Of Spanish Leather – but that time feels all the more precious at the moment. The recent craft movement and mindfulness revolution - despite all its risible Goop-y thinking and irritating social media messaging - has at least reappraised the value of the tactile, in battling stress and anxiety.

Likewise, engaging with art in creation - or even simple discussion - is known to help improve mental health.

Picking up the guitar at the moment has value for all these reasons, but at its most basic, it simply gives us something else to think about. When you lose yourself in building a pedalboard, recording a song, or trying to master, by ear, Leonard Cohen’s picking technique on The Partisan (update: still nowhere near), you give your bombarded brain time to recover.

Giving ourselves these breaks is good for us. It calms us down, gives us much needed mental distance and allows us to reset, mentally, for the next challenge or shift in our new reality.

About a year ago, I interviewed the acclaimed soundtrack composer Clint Mansell about his work on the film Moon. Discussing the merits of sci-fi films, he said, “You can tell any story you want. You can make any sort of parallel Earth you want within a sci-fi film.”

It is the same with playing music. We can create alternatives for ourselves and our listeners, we can say the things people can’t or won’t always voice in other ways - literally, figuratively, musically - and there’s often a relief, a catharsis, in this.

Across human history, play has long been our finest quality. Human children play more than any other species. We all know anecdotally (though the science is there, too) that children learn and absorb certain types of new information faster than adults. Their brains are more prepared to contradict existing patterns of thought, whereas adults are more likely to look for confirmation of existing patterns or beliefs.

Einstein knew the importance of play to problem-solving: his quote, “To stimulate creativity one must develop childlike inclination for play and the childlike desire for recognition”, can be found pasted onto numerous inspirational lake scenes.

Even as adults, though, every one of us maintains creative abilities - and more so when we regularly exercise that muscle. Experimentation and making lots of very sizable - sometimes terrible - mistakes has long been at the heart of our advances, but it almost always leaves us in a better place than where we started. I suspect both of these things will, eventually, be true of the current pandemic.

Even as listeners, music offers us a prism through which we see the world: a method of analyzing and appraising; a comfort and catharsis; a way of coping with both change and challenge in other aspects of our life.

The brain is remarkably adept at sifting through information to find relevance but I’ve never been more aware of my mind’s helpful ability to reinterpret songs in meaningful ways. When I take my hour’s exercise, I can’t take the guitar with me (tip: don’t be that guy), but I can take records and playlists. I listen to The Beach Boys sing In My Room and Brian Wilson constructs a place where “my worries and my fears” are locked out.

I absorb inspiring, creative players like Delicate Steve, who can create a cartoon guitar instrumental that somehow raises the hairs on my arms and makes me excited to play again. Or, I listen, for the 200th time, to Bruce Springsteen and The E-Street Band’s live version of The River (recorded at The LA Coliseum in 1985) - my go-to ‘hard-times hit’.

Bruce’s opening story - beautifully illustrating the complex ways the love between family members manifests and is obscured - is replaced, after a perfect pause, by that howling, desperate harmonic intro in a way that makes my face leak. That sense of listening and feeling those human connections - between the band members and, in turn, the push-and-pull of the crowd in their performance, feels quite poignant right now.

On one evening walk, scrolling through my audio comforts, two cars come blazing past me on suburban street straight into a busy junction and accelerate away at blistering speed. Some people’s first response, you realize, is to get angry, or self-destructive. At least with guitar, you’re making something. Even if it just floats off into the ether immediately afterwards, the benefit, the good feeling, lasts. Breaking stuff can give you a good feeling, too, but it doesn’t seem to last as long.

When this pandemic passes, there will be positives, silver linings for society. They might seem poor value for the price we will have paid, but that does not mean we should ignore their worth. We will, I hope, think a lot more about how we interact with each other.

The value of face-to-face time with family or friends - or bandmates and crowds - and the lack of it in other settings (hello, extraneous meetings and unnecessary commuting). A thought that keeps coming to me is that once things open up again even the crappiest bar room gig will - for at least a passing moment - feel special to those that make the effort to get there.

I don’t know when that light at the end of the tunnel will appear, but I know that playing and music will continue to help me to figure things out. In the meantime, I will return to my guitar, my hand washing - and try to keep my underwear on.