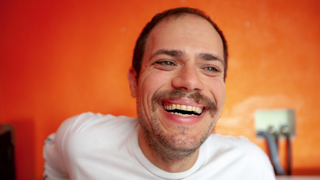 No matter how hard, nor pettily you search, it’s nigh-on impossible to find a reason not to love Jeff Rosenstock.

Between his infectious joviality, fantastical creative spark, and the fact that regardless of how far he surges in popularity, he still gives away all his records for free – not to mention how goddamn brilliant all those records are – the 37-year-old Long Islander is a DIY punk icon we can all aspire to be more like; the patron saint of mid-fi Telecaster shreddage and engagingly semi-coherent ramble-screaming.

On his fourth solo effort, NO DREAM, Rosenstock digs his heels deeper into the equally slick and searing political turbulence he first explored in depth on 2016’s WORRY. In some ways, it feels like the closing chapter of a trilogy – in others, the start of a whole new saga in itself. But defiant of where it sits in Rosenstock’s echelon, the album – essential listening in the erratic throes of 2020 – explores a downright unbelievable sprawl of sonic depth.

Even by Rosenstock’s standards, NO DREAM is an impressive feat of creative acrobatics. So, obviously, we needed to figure out how he made it work.

It kind of blows my mind how freely you’ve let your musicality soar on this album – you’ve got slow songs, hardcore songs, some ‘90s skate punk, a Weezer D-side… How do you go about crafting the flow of an album and finding where to hit those different beats without the transitions feeling polarising?
I don’t think about whether or not they’re polarising. To be honest, the way I mix genres up isn’t really something I even realised I was doing until I talked to other people about my music, which is really funny to me. When I’m thinking about making a record, I’ll start with a handful of songs that make me think, “Oh, these songs all make sense together.”

I’m always thinking of things in sequence, to an extent – at a certain point, you get songs where you’re like, “Alright, what does this need to make it compelling to listen to?” I try to think about the dynamic and the ebb and flow of the whole thing; it’s important to think about where on an album you’d be excited to hear something super fast, or when you’d be like, “Okay, there’s been a lot of loud shit in a row, I need to give my ears a break.”

I try to think, y’know, not just about the songs but what it’s going to be like to listen to 40 minutes of them back to back – is it going to be an enjoyable experience?

Does much of that have to do with the creative chemistry that exists between yourself and the rest of the band?
I go to the band with pretty fully formed ideas, just because that’s how I write. But everybody is so quick to not only learn the stuff, but add cool stuff of their own in – and also be really supportive of when I do things that I feel are really big risks that potentially nobody could be into. Like when I sent the demo for the second half of WORRY. to everybody, I was like, “Hey guys, I don’t know if this eight‑songs‑into‑each‑other shit is going to work,” but they were all just like, “Hell yeah, this is tight!”

I think I’m just in a band with people who have cool tastes, or do cool stuff, and they bring a lot to the party. And if there is anything that feels weird in a song, we all just talk about it between the five of us and we figure out how to make it better. We also just like playing music with each other. Every record we’ve done, you can hear that we’re just rocking out and having fun!

And you recorded this album pretty much entirely live too, right?
Y’know, to an extent – we did the basic tracks live, which is drums, two guitars, bass, and either acoustic guitar or some organ stuff. That’s how we’ve done all of these records; we get into a room and Jack [Shirley, producer] puts up some microphones, and then we try to play a good take. And then, y’know, eventually we play a good enough take, and then we move on to the next one! This album was cool because we stayed on the two-inch tape for a really long time – I did the vocals on tape, which was something totally new.

Did it just make sense with how raw and intense a lot of these songs are?
I’m just not much of a fan of records that have a lot of pitch correction on them, or audible quantisation – anything where I can hear the studio trickery to make something perfect, I’m like, “Nah, I can’t get into this.” It loses the human element to me. But most of the bands that Jack works with, he records live to tape. I didn’t know that going in, either – I just knew that I liked the way his records sounded.

He presented it as an option over the phone, and I was like, “Ahh, I don’t think so.” But then he presented it as an option while we were there – he’s was like, “Ah, just try it! Just give it a shot,” and we were like, “Okaaaaay.” And then we played through whatever the first song we recorded for We Cool? was, and by the time we were done, we were all like, “Oh shit, that actually sounds awesome!” And now that’s just how we do it!

What were you jamming on, axe-wise?
I’ve got a Jazzmaster – I don’t know the exact type, it’s called a Vintage model but it’s a new guitar… It’s a Fender! I know that! That was something I got at a really cheap rate from Fender after our band got robbed in 2015, they kind of hooked me up with it, which is really nice. It’s a fun one one to play – it’s got a whammy bar, so you can do all this cool shoegaze-y shit on it, and make a lot of really hazy, fuzzy sounds. I really like playing chords while just kind of loosely messing with the whammy bar on a lot of fuzz pedals, making it all sound really dreamy. That’s one of my favourite guitar vibes.

And then I play a Fender Jaguar baritone on some stuff, and I have this pink Tele Deluxe that I played on the other stuff! And then there’s a 12-string on one of the tracks… Mike [Huguenor] plays a Jazzmaster too. We pretty much all just use Fender guitars – some of them have humbuckers, some of them don’t… We’re not much of a Gibson band. I don’t feel like I know how to make a Les Paul sound good, y’know? I know people who play Les Pauls and they’re just like, “This is the only guitar that exists!” But for some reason, it’s never really made sense to me.

What about in the way of effects?
I get really into very specific things with distortion and fuzz pedals – when I step on the distortion pedal, I want it to feed back immediately. I feel like having really precise control of when you go, like, [hilariously imitates roaring feedback] – that’s a big thing for me. And also just that it sounds fuzzy and Black Sabbath-y or Weezer-y, versus that Marshall-ish crisp kind of tone – I don’t like that stuff. I’m more into blown-out, really nasty, fiery guitar tones.

I feel like I used, like, seven different fuzz pedals on this record, because they all just kept breaking as we were recording. Jack has this modded Rat, and I used an Earthquaker Acapulco Gold pedal a lot. I also have a Wampler Pinnacle Deluxe, which is a really great distortion pedal, but it’s been on tour with me for so long that, like, you look at it the wrong way and it goes, “F*** you, I’m not gonna work now.”