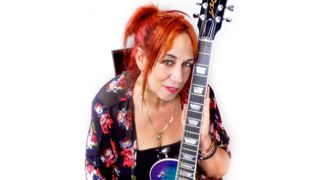 Back in 2014, Joanna Connor went viral. Which is one thing if you’re, say, a pop singer or the company that created Baby Shark. But it’s pretty unusual if you’re an adult woman in a purple dress playing stinging slide guitar on a cover of an almost-century-old blues song.

And yet, there was Connor, onstage at the North Atlantic Blues Festival in Rockland, Maine, tearing through an electrified version of Son House’s Walking Blues, with an incendiary solo that fused shredding licks, tapped passages and, yes, plenty of searing slide work, in a show-stopping performance.

As for what pushed the fan-filmed clip into the millions? “Because I look like a middle-aged mom playing like a maniac,” Connor says with a laugh. “So it was like, ‘What the hell is this?’ But I think on the internet, anything that’s a little unusual will catch on. And especially if it’s good.” She laughs again. “Or crazy - one of the two.”

Crazy, of course, is in the eye of the beholder. But what’s not up for debate is that Connor’s playing in the video is good - damn good. Which apparently was a shock to the millions who first glimpsed her with that Walking Blues performance, but will come as little surprise to those blues fans who have been keyed into her more-than-three-decades-long career.

As for blues and guitar aficionados who haven’t heard of Connor? Well, that’s understandable, too. Because even though she’s been releasing albums on and off since 1989, for the past 15 years or so Connor had been largely under the radar to anyone outside the Chicago area, where she has been playing regularly four nights a week. “I do three nights at the Kingston Mines [club] and one night at the House of Blues,” she says. “So for half the week I have steady work.”

Steady, but not easy - at the Kingston Mines her shows often stretch up to five hours in length and combine solo acoustic sets with full-band electric jams. “It’s like combat training,” Connor says. “I feel like I’m ready for anything.”

Connor first took up her Chicago residencies in the mid 2000s in order to raise her young daughter at home after decades of continuous touring. But with that child now grown and off at college, Connor is looking to get back out on the world’s stage in a big way.

“You’re going to be seeing me everywhere again,” she says. This year she’ll join Joe Bonamassa on his 2020 Keeping the Blues Alive at Sea VI cruise, as well as hitting Europe and the festival circuit. And she has also just released a new album, the rather excellent Rise.

The record, just like that viral Walking Blues video, reinforces the fact that Connor is a singular force in the modern blues world. On Rise, she whips together everything from slinky funk (If You Want Me to Stay) Wes Montgomery-esque jazz (Rise) and pop standards (Since I Fell for You) to Celtic-style acoustic numbers (My Irish Father) hip-hop (Flip) and hard rock (Cherish and Worship).

There’s also, of course, a heaping dose of fiery, blues-drenched slide playing, in particular on tracks like the whiplash boogie Blues Tonight and the strutting Earthshaker.

As for where Connor’s inspiration comes from? The answer is, well, everywhere.

“I grew up in the Seventies, when you could turn on the radio and listen to heavy R&B or soul music one minute and the Doobie Brothers the next, and then Led Zeppelin and then some silly pop tune and then the Rolling Stones, and it’s all on the same station,” she says. “I never worried so much about genres and things like that.”

When it came to the blues and blues guitar, meanwhile, Connor was fortunate enough to have a mom who took her to see Buddy Guy when she was just 10, and a teacher who opened her eyes and ears to the intricacies of slide playing.

“I loved Freddie King and B.B. King, Taj Mahal, Robert Johnson, all of it,” she says. “And this teacher, I told him what I wanted to learn and we started with a lot of fingerpicking stuff. Then he was like, ‘Ah, I’m going to teach you to play slide…’

"I didn’t really even know what that was - I was just a young teen at the time. But he was a taskmaster, and he turned me on to a lot of Ry Cooder, and then I found different players for myself, like Sonny Landreth, Lowell George, the Allman Brothers, later on Derek Trucks… I love all of them.”

By her late teens Connor was gigging steadily around her hometown of Worcester, Massachusetts, and also doing some touring. After a visit to Chicago, she decided to relocate there for good in her early 20s.

There, she landed a steady gig playing with Dion Payton’s band at venues like the historic Checkerboard Lounge on Chicago’s South Side, and also sat in with legends like Otis Rush, Little Milton, Junior Wells, James Cotton and Buddy Guy himself.

“I went out seven nights a week, watching and talking and listening and jamming - I was thrown in the deep end of the pool,” she says. ”Or, I threw myself in there!”

But it wasn’t all just “blues heaven,” as she calls it. One time, she even found herself onstage with Jimmy Page.

“He was on tour with the Firm, and there was a guy from Atlantic Records who was a big blues fan,” Connor recalls. “So he brought Jimmy down to the Kingston Mines, where I was playing with Dion. And Dion said to me, ‘Joanna, go up and play - there’s some English guy here, he’s going to play my guitar.’ I’m like, ‘Okay, whatever.’ And it was freaking Jimmy Page. Some English guy!”

She laughs. “I remember the first song we played was Sonny Boy Williamson’s ‘Help Me.’ And Jimmy leans over and he goes, ‘What key are we in?’ I’m like, ‘A minor’!”

Clearly, Connor has made her mark on the stage, and continues to, to this day, playing upwards of 200 shows a year. And even though she has recorded plenty of albums at this point, she admits “the studio to me is still something I’m getting used to.

"But with the new album, I was just hoping that some of that energy from the stage came off on the record. And I think it did. With my band, all of the rhythm tracks were done in no more than two takes. They laid down seven tracks in four hours. So we nailed it.”

As far as Connor’s setup, she kept things fairly streamlined, relying primarily on her trusty Gibson Les Paul 1960 reissue and a newer Les Paul Modern. Amp-wise she played through an Orange Crush Pro 120 combo and a Vox AC30, and for the acoustic parts she ran a Dean acoustic straight into the board.

Effects were likewise minimal, headlined by a Boss delay, reverb and Blues Driver. “You hear the different tones on the album and it’s like, ‘Oh, is that the same guitar?’ And it is,” Connor says. “I just think there’s so much versatility out of a Les Paul and a little bit of gear, you know?”

As for her playing, she continues, “I play from my gut. I approach my music, in terms of the soloing part, kind of like a jazz person - get in the moment, get in fully and just go at it.” Sometimes, she admits, that no-holds-barred approach has led to her being pigeonholed as a particular type of guitarist. “Everybody’s kinda like, ‘Oh, you’re a shredder,’” Connor says. “But it’s just that my adrenaline is pumping and I get really excited!”

That said, it wouldn’t be the first time she’s had to deal with preconceptions. “I’ve always been seen as unique - I was a white woman from Massachusetts who played the blues. It worked in my favor in some ways because people were curious. But in other ways it was rough because some people were really against me being around. It just depends on the individual. But it made me stronger, you know?”

At the end of the day, she says, “My main goal is to make good music and enjoy the times I’m playing. I just hope it opens doors for people to listen to the blues and keep the art form alive, and maybe inspire other women to pick up the guitar.”

Connor continues. “Because the guitar, it’s a universe. Besides maybe the human voice, it’s the most expressive instrument there is. I mean, what’s more amazing than a killer guitar solo?”