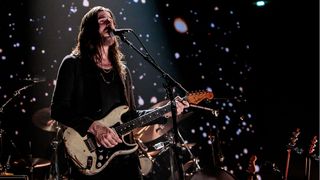 Many of us might recognise guitar player and multi-instrumentalist Jonathan Wilson for his collaborations, most recently accompanying Roger Waters on tour and playing stadium shows that presented Waters' oeuvre in a quasi-cinematic production.

Wilson has played with the likes of Roy Harper and Jackson Browne, and when it comes time to cut his own records he has spun the Rolodex to invite the likes of David Crosby, the Heartbreaker Benmont Tench, and Wilco's Patrick Sansone to the studio.

He has also shared studio and stage space with the great Erikah Badu, Father John Misty, and Bonnie Prince Billy. Wilson gets around.

The song is always in the foreground. That's his USP. Recorded in Nashville, Wilson's latest album, Dixie Blur, boils this idea down to its quintessence. There's a country, rock 'n' roll, and Wilson's wry observational wit, too, but ultimately it sounds like sincerity – poignant, fun, a paean to home.

Here he takes five minutes out to talk about his career, starting at the logical point: his first guitar.

I got my first real six-string...

“I got my first proper guitar as a combined Christmas/13th birthday present, a black Squier Stratocaster with a Squier 15 amplifier. I could already play because my dad had an amateur band and he had several acoustics at the house. His band were playing the British Invasion stuff – they were that generation of kids who saw the Beatles on the Ed Sullivan Show.

“I was sounding decent for a youngster and got a lot of encouragement from my family to keep it up. That made me realise I could pursue this beyond just playing for fun in my bedroom.

“My dad was a real big fan of John Lennon’s jagged rhythm style, and he encouraged me to listen and not be too noodly, to notice the other aspects of playing. I spent a long time on the drums too, and that informs my timing and rhythm as a guitarist.

“I always say that is what makes you money, not speed and tons and tons of notes. If your timing’s great and you can sit in the pocket and you’re maybe even content to chug on the same chord for a while, you should be okay.”

Let me whisper in your ear…

“It’s important to figure out ways to grow the potential of your ears. The greats would sit at a turntable and play along to Elmore James or someone like that, and that’s a tried and true way of training your ear that has served me well. With tab or visuals there’s no real connection to the notes, the tonic or the key of the song.

“YouTube can be good because you can see songs played close up, half-speed if you want, but you see these kids just showing off, playing fast and jumping from song to song – that’s not useful.

“Slow down, try to understand the tonal centres of a song without the flashy bits and get your playing steady and confident. It’s easy to have a home studio these days and it’s a good idea to overdub over yourself – get it in the form of a recording session, get familiar with the sound of yourself in headphones.”

Chasin’ the big wheels all over Nashville…

“It wasn’t on purpose but [new album] Dixie Blur is definitely the most emotional, straight‑ahead album I’ve done. I recorded in Nashville to tap into the vibe there – it’s such a good-time session town and you can hear that in the sound of the pedal steel, the fiddle.

“In the past I’ve self-produced and it’s been along, arduous process, so to be in a band with these incredible session musicians all tracking together at the same time was a hugely freeing experience for me.”

Just another brick in the wall...

“I never expected to be working with Roger Waters. We played 156 shows on the Us + Them tour, I sang pretty much all the David Gilmour parts and did a few solos, but all the iconic Gilmour note-for-note stuff was done by Dave Kilminster, an amazing shredder. I was off the hook! It can be a daunting gig, but Roger is totally chilled out and super-funny. He’s 76 and he rocks harder than the rest of us!

“I do remember some incredible moments – playing the Circus Maximus in Rome in front of 80,000 people; playing Wish You Were Here in front of a stadium of people in South America on a Guild 12-string I borrowed from Jackson Browne. Then I have to come back to planet earth and play my own shows. But it isn’t that hard. I get the best of both worlds – that’s the idea, right?”