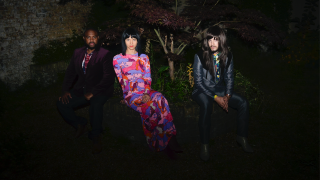 Their third album, Mordechai, is perhaps their most ambitious, too – it’s a silky, slinking journey down a rabbithole of artistic exploration, at once loose and lucid and loveably raw, and surprisingly tight, with song structures that require multiple listens to fully understand and appreciate.

Though mostly defined to this point by their sprawling nuggets of instrumental gold, Khruangbin employ vocals more prominently than ever before on Mordechai, gifting it a brightness in personality that previous records lacked.

We caught up with guitarist Mark Speer to chat about how that personality is weaved throughout the album, and how the new ways Khruangbin approached the recording process for it led to material they never expected would materialise.

How did the philosophy behind Khruangbin inform this record?
We’re constantly influenced by music from all over the world, and specifically what was happening in the mid-to-late ‘70s and early ‘80s. We’re informed really heavily by the collision of culture – what happens when western funk and indie meets regional styles, and how they mix together. We really like what happens when something from the west collides with a foreign subculture – something like disco, for example, becomes so mainstream that it becomes influential in a country like Turkey. But Turkey might not have the same context disco has – or had – in its time in the US. But it continues to influence music in that region for years, well after the disco demolition in the States.

That whole thing is all really fascinating to me. And with this particular wave, in 2020… Khruangbin had been on the road for just about four years straight, and it was time to make a new record. When it comes to doing a record, we make the time to do it, and then we just go in and do it. Sometimes we have stuff written, and sometimes we don’t – in this case, we had some bits and pieces, and a few ideas for some things we wanted to do on the record, and that’s what dictated and informed what we ended up doing.

What is it you wanted people to get out of the LP when they pop it on for the first time?
Y’know, I don’t know! I don’t know what I want people to experience… I don’t know if that’s really my business. We try to make our music as intentionally vague and open-to-interpretation as possible, so that everybody can have a unique experience when they listen to it. That’s why I’ll never tell you what any of the songs are specifically about, because that would just ruin the experience. I love that each song means something unique to the listener – it’s more fun that way.

You can use the music as a backdrop for your own experiences, in a sense.
Yeah. You know Hello Kitty? Hello Kitty is obviously a cat – I’ve read that it’s actually a little girl dressed as a cat, but that’s a whole different story – but the idea is that you have this face that’s kind of blank; Hello Kitty doesn’t have any expression, which allows the person looking at Hello Kitty to adapt their own emotions onto that character. That’s what we want to do with Khruangbin – you can put your own interpretation of a theme onto the music, because we leave it open enough to that.

What was the creative dynamic like between the three of you in the studio?
Generally, DJ [Donald Johnson, drums and keys] will start off with a drum loop; he puts stuff into folders for us – these eight- or 16-bar drum loops – and Laura [Lee, bass and vocals] has a link to that folder, so she’ll sit there at her computer and record herself playing bass for an hour, or whatever, and then she’ll send it over to me. I’ll listen back and pick out the stuff that I like and kind of make an arrangement with those parts, and then I’ll add the guitar to that. That’s generally how we write music.

When it actually comes time to record, we learn the the demo, and then we play it together. What you hear on the record is generally us playing it for the second or third time, live. For this particular record, it was a similar kind of situation, but it happened faster than it has in the past. We were all at the farm, chilling in the barn, and it would be like, “Okay, so this morning we’re going to pull up a drum loop, I’m going to get it set up for Laura to play her bass on, and I’ll go do something else for a couple hours while she does that.” And then I’ll come back and she’ll go and do something for an hour while I’m cutting up her part and writing something to go on top of that.

How did you take advantage of that situation?
We focussed more on the bass and drum writing, and that interplay between those two instruments, moreso than the guitar parts. A lot of the times, I ended up just playing my rhythm parts in the recording session, with the thought that I would go back later – because we had all this time in post to do overdubs, which is not usually the Khruangbin way – and I would overdub a really refined guitar part. I was going to take the time to work it all out and make it as strong as it could be.

But what ended up happening was that we actually kept most of the rhythm guitar parts, and just ran with that. Laura had gone through a really life-changing experience, and that threw the writer’s block into whack when it came to her lyrics. So I kind of sat down with her and helped her write lyrics – she had tonnes of stuff written in her notebooks, and all I had to do was basically arrange them all into song form, change some words here and there, put some phrasing together… And we decided to go down the path of exploring what the vocals would sound like over that stuff – it was a bit of an experimental process.

There’s a lot of chordal stuff that I’m playing – mainly because I was listening to a shittonne of fingerstyle players, and I just really liked that stuff. I thought it was beautiful. And that just left a lot of room for the vocal to sit on top and drive the song, so that’s what we did.