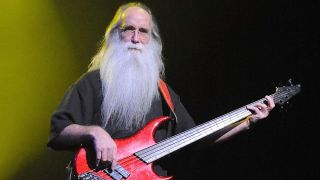 There is no other bass player like Leland ‘Lee’ Sklar, whose performances you can hear on a frankly incomprehensible 2000-plus albums, from James Taylor, Carole King, Billy Cobham and Jackson Browne to Linda Ronstadt and way beyond that.

Of course, Carol Kaye and Chuck Rainey may have performed as many sessions, and others have toured for as many road miles and accompanied similarly big names, but who else combines stage and studio to Sklar’s extent?

Newcomer Postell aside, the band is a modern reiteration of the Section, the label applied to the other four members since the '70s, when they first made their bones as a state-of-the-art studio ensemble.

This gives us an excuse to catch up with Sklar, like we needed one. Read and learn!

Tell us about the forthcoming Immediate Family film, Lee.

"It celebrates the fact that Danny Kortchmar, Russ Kunkel, Waddy Wachtel and I have been together for pretty much 50 years now. We were approached by Denny Tedesco, who directed The Wrecking Crew movie in 2008.

"I’ve known Denny forever because I worked with his father Tommy Tedesco and all of [the legendary '60s studio team] the Wrecking Crew, when I first started. I was involved in the Q&As when they were showing the Wrecking Crew movie, as I was a guy who worked with them.

There’s music on the way, too.

"We’ve just started mixing a new album. We cut 17 tracks at Jackson Browne’s studio, and that should be out later this year. Steve Postell is a new addition because he and Danny hooked up and started writing together, and he seemed like a logical fit for this group. It was all based on a Japanese record deal that Danny got; he called his album The Immediate Family because we really are like family to each other."

There are parallels between the Immediate Family, the Section and the Wrecking Crew.

"They were together about 12 years and they only worked in the studio. [Drummer] Hal Blaine would leave once in a while to work with Frank Sinatra in Vegas or wherever, but basically they were so busy that they stayed in the studio and worked around the clock.

"We’ve been on the road with artists, we’ve written songs with them, we’ve produced songs with them, and all that - and we’re still working together after 50 years instead of 12. It’s a different spin, but it’s incredibly flattering that these guys came to us and said that they’d like to do this project.

You must have a near-telepathic understanding with the rest of the band by now.

"Sometimes it’s a blessing and sometimes it’s scary! Especially with Russ. He and I have had a relationship for so many years, projects and tours that we know what the other is going to do.

"We look at each other on stage, because there’s nothing I hate worse than seeing a band on stage that doesn’t make eye contact. If you engage with each other, the audience will engage with you.

"But we can be playing in separate rooms to a click track, and when we compare the tracks, we catch the same fills. Not that it’s predictable - we surprise each other a lot."

"My Warwick with GHS Super Steel roundwound strings, the Dingwalls with Dingwall strings and Euphonic Audio amps. Warwick have now given me a signature bass, that’s modeled on their Star-Bass, which I absolutely love.

"The major difference with my instrument is that the body shape has a slant where my right arm sits rather than an edge, and the only way we could do that was to build a chambered bass and not a hollow-body. I only have a four-string version of that right now. And with Dingwall, I’ve been with Sheldon for over 18 years now.

"I have a Hofner and a few other basses that do various things, but my main road bass is the Dingwall. I only take two basses on tour, because I don’t like to change basses in the set for no reason. As for the EA amp, I’ve loved those for years. I got turned on to their amps years ago. They have a new head called the Professional which I just used with Phil Collins, with a 1x12 and a 4x10 cab. It works great."

"I take five-strings just in case I need that low note - but I still approach the five-string as if it’s a four-string, musically speaking. I try to use the B string only when it’s necessary; if you spend too much time down there, I feel that you create too much of a sonic hole between you and the guitars."

"As much as I have pedals sitting here in boxes, I generally don’t take any on the road. One thing I do is I carry around a box of little foam blocks, and I use them with roundwounds to get a flatwound sound. I put them between the E and the A strings, and the D and the G strings, to get the sound of a dead old upright.

"With an octave divider like the Boss OC2, you can get a sound almost like a Mini Moog, because the blocks remove all the overtones and it doesn’t glitch nearly as much."

You’re often seen at bass shows and other events. Do you enjoy meeting fans of your bass playing?

"I do like saying hi to people and doing masterclasses, but I’m never comfortable with adulation. You know, I’m just really happy to be part of the bass community. Every day I go onto YouTube and I see all these amazing players, and I go, ‘Christ, I’d be embarrassed to take a bass out in the same room as those guys’.

"We all know our strengths and weaknesses, and I sit in awe of these guys who have these ridiculous chops and facility. I don’t play like that - that’s not my interest, for the most part. If I get cornered, I can bullshit my way through it, but I just love playing well-constructed songs."

Have you ever been a full band-member, rather than a session player?

"I was in a band called Barefoot Servants back in the early 90s. I was hired to do their record, but I had such a good time that I said ‘If you guys need a bass player, I’d love to do this with you’. We did a tour together, and I so wish that that band could have taken off, because it was killer.

"The business side of it completely failed, unfortunately, and I couldn’t afford to do it any more. Other than that, I’ve always been a hired gun, with Toto or Lyle Lovett and so on. I’m hired help, so to speak. I’m your gardener!"

Last time we spoke, you were suffering from a spider bite after doing yard work, so don’t jinx yourself by mentioning the garden.

"I’m trying not to. Yesterday I had to move some stones that weighed a couple of hundred pounds, and there was nobody else around, so I did it myself and my back is paying the price today. But I got it done, and that’s all I care about."

Spider encounters aside, have you generally stayed fit and healthy after so long as a bass player?

"Yes, pretty much. It’s strange to me that the only major injuries I’ve had have been to my hands. Why couldn’t it be something other than my hands? I’ve had some ligament injuries and things like that, so maybe some dexterity isn’t there any more, in my mind at least, but nobody’s ever said to me ‘Man, you’re not playing up to par’, so whatever’s going on, no-one’s noticed. 'How old are you, Lee?' I’ll be 73 in May... My God."

I guess certain ailments are simply to be expected at this point.

"Yeah, but I feel very fortunate that I’ve remained active my whole life, I never drank, smoked or did drugs, so I’m completely clean on that level. I haven’t eaten meat in years, and I try to live a healthy life.

"I did a big yard project recently, and I hired a guy to come over and do it. Both his helpers were sick and couldn’t come, so I said ‘I’ll do it with you’. He looked at me and said ‘How old are you? You work harder than my assistants!’

"I’ve never shied away from hard work, so I feel really good. I have a lot of friends who’ve had back surgeries, knee replacements and all that. I’m just gonna haul ass as long as I can.

"The heredity in my family is good - my parents, my grandparents, most everybody lived into their nineties - so I figure I’ll be around to annoy people for a few more years!"