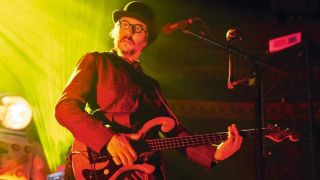 Les Claypool is a one-man modern bass-playing powerhouse, a post-modern polymath, a punk-rock virtuoso – a genre-defying master of bass playing who is as well versed in jazz fusion as he is in heavy metal or progressive rock. His band Primus mixed funk, metal and bizarre humour to rise above the 'cult sensations' tag and become a genuine phenomenon – headlining Lollapalooza, recording the theme tune for South Park, and melting the brains of TV viewers through appearances on Letterman.

He's a member of Oysterhead with  Trey Anastasio (of Phish) and Stewart Copeland (of the Police), auditioned for Metallica after the death of Cliff Burton, and his list of collaborators is huge, from Tom Waits to Limp Bizkit. His most recent album is The Claypool Lennon Delirium's South of Reality, a collaboration with Sean Lennon that was voted 23rd best album of 2019 by Classic Rock magazine.

Chris Squire was an early hero to me. Roundabout is on this album, along with a bunch of other songs that influenced me. The guy who produced this album, Eddie Offord, contacted Primus in the early days and wanted to produce us, but we were too many chefs in the kitchen and we didn’t want anyone producing us. But the one thing he said was, "I can get you that Chris Squire tone." I was like "Hmm!" and trying to pick his brains about it, but he wouldn’t give up any information, ha ha! Having played for a long time now, I’ve learned that your tone is very much in your fingers and how you attack your instrument, though.

All The World’s A Stage was an incredible discovery. It was really the album that launched me into the world of playing bass. Geddy is a very melodic player, and the way he phrases things is incredible.

This album was a great influence on me, not necessarily because it had Larry Graham’s best songs, but because there’s a song on there called Scream which is very impressive. Pretty much anything that Larry played on is amazing, though – he’s done everything there is to know about bass.

Tony Levin is revered in the world of bass thanks to all that stuff he did with Gabriel and King Crimson. It was pretty spectacular. As far as being an all-round player, he’s probably my favorite. He’s got a good groove, he’s got a great tone, he’s got that creepy mysterious experimental element to him, and he’s incredibly tasteful. There are guys who are tasteful that you couldn’t tell from a hundred other bass players, but Tony is very recognizable. He sits in the mix but you can recognize him, which is a very tricky thing to do.

Mark Sandman was in his mid-forties when he died at a festival in Italy of heart failure. I once played some music with the Morphine guys for a tribute record to Mark. We did Honey White, which was a song that I’d played in my band in the past, and they hadn’t played the song since he died. It was a little strange. He played a two-string bass with a slide, so I did my best. He had an amazing feel and was very creative. It’s not like he was a technical wizard: he was all about emotion.

For all the latest information about Les Claypool, visit his official website. Buy Les Claypool on vinyl and CD here.