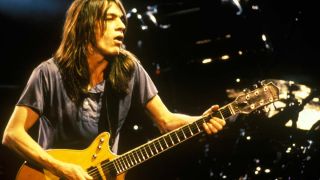 Few rock guitarists have earned the same respect from the blues world as Angus and Malcolm Young.

There’s an undeniable, tangible honesty to AC/DC’s music that pays homage to the very roots of rock ’n’ roll, sticking to the traditional formula of a few easy chords and powerful pentatonic licks.

Their raw and uncomplicated tones echoed that essence of sonic purity – favoring a more direct and undiluted kind of attack. Here, we’re looking at the gear used by Malcolm.

As with his brother, the signal path is renowned for simplicity and it works thanks to the sheer quality of its combined ingredients. Very little has changed over the years – even Stevie Young is rocking Malcolm’s gear since he took over the reins. Read on as we cover the essentials.

'63 Gretsch Jet Firebird, aka 'the Beast'

The G5222 strikes a balance of modern and authentic at a quarter of the price of a Custom Shop ‘Salute’ Jet. Think ‘aged’ rather than ‘relic’d’; a homage rather than a replica.

Malcolm’s main go-to guitar, The Beast’s original red paint was stripped to reveal its trademark natural wood finish. After trying out a humbucker in the middle position in the 70s, the neck and middle pickups were removed all together, leaving the cavities open and keeping just the one Filter’Tron pickup in the bridge position.

The Filter’Tron is key to the DC rhythm tone; with greater clarity (though less output) than a traditional humbucker, allied to increased power over a typical single coil, there’s a balanced output with a sweet top end.

All the tone controls on The Beast were bypassed, so the signal path is simple: bridge pickup, volume pot, output.

Early on, Malcolm replaced the stock Gretsch roller bridge and Burns tailpiece with a Badass wraparound bridge, though in later years the original system would be reinstalled. Malc was never a trem user, but the extra string length between the stock bridge and tailpiece would alter the tone and sustain.

Like Angus, Malcolm is a Marshall guy through and through, and, whereas Angus prefers Super Leads, Malcolm would opt for Super Bass heads.

Originally designed as a bass amp, the Super Bass shared circuitry with the SL model but was tweaked to give greater clean headroom at high volume. Perfect for Malcolm, whose rhythm tone is surprisingly clean – and his amp settings reflect this. Keep bass and mid at around 3, with treble and gain around 7 for a ballpark tone.

Other Marshalls have been seen in Malcolm’s rig over the years, the JTM45 being used more than any other model, but the Super Bass gives the quintessential DC rhythm tone.