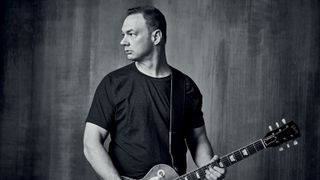 Thomas Tull launched the blockbuster film company Legendary Entertainment and is part-owner of the Pittsburgh Steelers. He’s been behind Jurassic World, The Dark Knight and the Hangover film series as well as the 2008 Jimmy Page/the Edge/Jack White documentary It Might Get Loud. But Tull’s real passion is his first one: the guitar.

Of course, he’s got a seriously impressive collection of '50s Les Pauls, Teles and Strats, but Tull is no mere collector or dilettante. He’s a skilled player who puts his classic instruments to good use, cranking out riffs from the Rolling Stones/Led Zeppelin/Aerosmith school of rock in his band, Ghost Hounds, teaming with lead player Johnny Baab to create interwoven, crunchy guitar parts.

“I love being collaborative,” Tull says. “It’s actually one of the through lines of everything I’ve done - and certainly between making movies and making music. There’s something remarkable about sitting and creating something together with incredibly talented people.

"You all work together and suddenly you’re watching an audience react to a movie or move their body involuntarily to a song. It’s an amazing feeling.”

Ghost Hounds have had some big-name experiences, opening for the Rolling Stones, ZZ Top and Bob Seger, and Tull is deep into writing material for the band’s next album. He insists that he has no problems concentrating at business meetings while daydreaming of rock ’n’ roll adventures.

“The through line of my entire life has been intellectual curiosity,” Tull explains. “I’ve always gotten very excited about learning a bunch of different things. In high school, I was a musician and an athlete and a science geek and a comic book nerd. It’s always been about a mix of things.

"I find it stimulating to go from thing to thing; everything drives each other. I’m well aware that I’m one of the luckiest people walking the planet.”