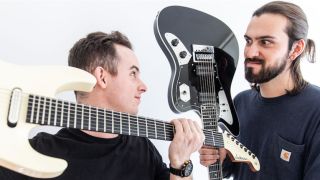 From the second they kicked down the doors with their 2010 Hollow Existence EP, the fusioncore firestarters in Northlane have been hell-bent on shaking up the Australian heavy music scene. There was the labyrinthine viral campaign that launched their breakthrough 2013 record, Singularity; the revolutionary Equinox EP with UNFD labelmates and fellow ‘core lords In Hearts Wake, and the volcanic eruption of inner-fandom calamity they spurred when 2017’s Mesmer hit shelves without a word of warning.

Now, for their fifth album – the punchy and punishing, yet equally buoyant Alien – Northlane have peered inwards, reinventing their core sound with a soul-tickling blend of ferocious, gnashing guitars and crisp, kaleidoscopic synths.

“It was quite natural to squeeze that stuff in, as long as the song was still heavy and impactful,” lead guitarist Jon Deiley says of Northlane’s newfound love for the bass drop. “When I was writing ‘Eclipse’, that was basically a techno song, and all I did was put low-tuned guitars on it to make it heavy. The guys were like, ‘This is wack, but I guess we could do it!’ And I think that kind of became the crux of the album – even if something is really electronic and really weird, if it’s heavy enough, we could get away with it. ‘Rift’ is definitely more electronic – I think there’s one guitar on it, and it’s just a little background riff.

“As my tastes in music are evolving, I’m realising that there’s actually heaps of parallels between electronic music and metal. It’s really just the tones and the textures that change and kind of dictate the genre. And that led us into experimenting with tempos as well, and what tempos and do for a metal band. Because never really thought about that – I don’t think a lot of metal or rock bands think about tempos. We’d just write whatever came to us, and if it sounded good, we’d roll with it.”

Though Northlane have never been ones to settle on any one particular style or limit their armoury of techniques, Alien is undoubtedly their most diverse and dynamic offering yet. The spate of tones they explore is seemingly endless, every new spin unearthing another hidden nugget of sonic gold. Thus, we’re naturally stunned to hear that in the studio, Deiley and rhythm shredder Josh Smith were conspicuously conservative with their setups.

“When we were in the studio in May [2018], we got our hands on every amp we could and shot them all out,” Smith explains, “And the clear winner was my Diezel Herbert, so that became the backbone of the record. For a few parts here and there, we would swap out a different amp or add another layer onto it with a different effect, or maybe use a different cab or mic – but for the most part, a lot of the guitars are just really heavy, and there’s not a lot of experimentation to be done there. So it was just about going in with what we knew worked, and getting the tracking absolutely right.”

Its roar so garish it could make lions cower, the Diezel Herbert is a no-brainer for any metal band keen to scare the shit out of some pop fans with their mighty wall of shred. And as Northlane’s top priority on LP5 was to amp up the heaviness, it makes sense the Herbert would lead their feed.

“If you’ve ever used one, you’ll know it’s a very high-powered amplifier,” Smith boasts. “It’s rated at 180 watts, so it just has this unbelievable, immediate, huge bottom-end to it, which you don’t really have to force out of the amp. If anything, you’d be pulling it back! And because the tunings are so low on this record, all the other amps that we used – which were, like, the cream of the crop of high-gain stuff – they just couldn’t compete with the density that the Herbert had in those tunings. It just sits in the mix perfectly. And what we did with it was pretty basic – it was the Diezel boosted with the J. Rockett Archer, which is like a Klon, and then a Friedman-miced Mesa Boogie cab. So it was all pretty tried-and-true stuff, but that setup just let the Diezel shine a lot.”

In the way of guitars, Deiley and Smith used a similarly pared-back supply. The pair rep ESP and Jackson signature models, respectively, with Alien built centrally around a Jaguar-esque piece that Deiley had whipped up, and a take on the inimitable Jackson B7 (bend your eyes left for a look-see) that Smith ripped out on to his heart’s content.

“That guitar is based on the original B7,” Smith explains, “But it’s got a few niceties to it that the B7 doesn’t have. The guitars that have always tracked the best for us have been Jon’s ESP Telecasters – they just sound really massive – and the guitar that seemed to work the best for a lot of the really low stuff was the Jazzmaster they built him. But all of our guitars are very similar – they’re all 27 inches with alder wings, ebony fretboards, maple neck-throughs and Bare Knuckle pickups. The biggest difference is that I use different pickups – Jon uses Black Hawks with my signature one in his neck, and I use my signatures with the single coil in the neck.”

So we’ve established that less is more when it comes to making the perfect Northlane album – at least as far as the equipment is concerned. And as we’ve come to learn from previous releases, it doesn’t really matter what they’re using to lay down their brain-battering beats; ultimately, it’s the performances themselves that count. In another paradoxical curveball where the palate of techniques they pull from is titanic but the way they came to scratch it up was enviously lowkey, Deiley tells us that – after a neat decade in the role of chief string-splitter – he’s more-or-less winging it when he lays waste to his fretboard.

“I don’t really practise on the guitar anymore,” he chuckles. “I stopped practising years ago, but I feel like I’ve been able to maintain my abilities – maybe even strengthen them a little bit. Like, my right hand has always been a little bit shit at playing live, but in the last five years, that’s definitely improved a lot. And things like playing to a click – I kind of know my bag of tricks now, and I know what works with Northlane. I know that I enjoy tapping riffs, but I stopped doing that in a soloing way and inverted it, and started doing them on the top string, and that’s opened up a whole other world of possibilities with our riffs. Because you’ve got 0, 12 and 24 that you can f*** with – you’ve almost got two-and-a-half octaves, so there’s a lot you can explore.”

Aiding in Northlane’s stylistic exploration on Alien was their decision to self-produce it. Though they teamed up with Adam ‘Nolly’ Getgood (of Periphery fame) for some massively lucrative studio time, the record was largely pieced together by Deiley – not just a phenomenal guitarist but a programming wizard to boot – himself, working closely with the rest of the rest of the band to craft a stunning, panoramic banquet of what Northlane have to offer.

“I don’t actually know where the idea [to self-produce] came from,” Deiley says, “But the demos were just sounding great from the beginning, so we didn’t really need anyone to polish them up for us. We wanted a bit more control over how things sounded, too. Nolly is exceptional at what he does and we probably couldn’t have done it without him, but a lot of the songwriting and everything – just getting the sound right – that was done way in advance, just to eliminate some of those little things that can go wrong right at the very end, when you start getting mixes done.”