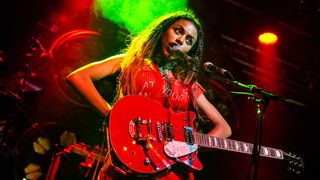 There’s a sense of chaos, of the ground giving way beneath you. This being music, that feeling is illusory. You can’t compose chaos, but as Nova Twins guitarist and vocalist Amy Love explains, when you feel totally free to create, you can get pretty darn close.

Love formed Nova Twins with bassist Georgia South about five years ago, maybe longer – Love is hazy on the details. But this she does remember: their sound evolved under their own steam.

“Georgia’s parents are musical,” says Love. “For years, they always encouraged us just to be as creative as we could, to do what we wanted no matter how crazy or weird it might have sounded. We were encouraged to be weird and wonderful.”

It helped that there was no one scene where Love felt at home in. Her mum would play Toni Braxton and Whitney around the house. Love naturally gravitated towards bands such as the New York Dolls, MC5 and Deep Purple.

Their energy was infectious, setting certain expectations as to how such energy could transform a live performance, and yet, inspired as she was, Love still felt she was experiencing it from a remove.

“I am half-Iranian and half-Nigerian,” she says. “I think when you are already from different cultures and backgrounds, you already don’t necessarily feel like you can fit in. You do feel on the outside sometimes, and I think when that happens you look elsewhere. There was no point where I thought, ‘This is where I belong’.

“I had the privilege to just walk around and take my pick. Obviously, the people who looked like me were in the hip-hop category, so I was looking at people like Missy Elliott and Destiny’s Child, and more R&B/hip-hop artists. I think that is why it is quite a broad sound and it crosses over.”

Nova Twins are a guitar band, for sure. You could think of them as the quintessential power trio, with drummer Tim Nugent rounding out the lineup and laying down quicksilver rhythms for Love and South to build upon. Typically, that’ll leave space for guitar, but with Nova Twins, Love has to search for the frequencies in which her guitar can do the most damage.

Often she will use it as texture, as raw, organic material fighting for air time with the drums and South’s bass. South is an inveterate tone seeker, augmenting her bass with an array of stompboxes. Her signal path is jealously guarded but we’d suspect there is some hefty synth pedals on her board, perhaps a pandaMidi Future Impact V3 or maybe a Boss SYB-5.

Love is similarly adventurous with pedals, and similarly coy. What she is prepared to say is that she uses a ProCo Rat, a tuner, and has only added one pedal in the last two years.

“Georgia would kill me if I divulged anything!” she protests. “But I like Crazy Tube Circuits, Boss, EarthQuaker Devices...” In the studio, producer Jim Abbiss would wheel out more pedals to try. But they weren’t looking to fine-tune the recording.

On the contrary, Abbiss’ role was in trying to get capture the intensity of the Nova Twins live sound onto tape; the last thing the recording needed was housetraining.

“Jim wasn’t into fucking around with things too much,” says Love. “It wasn’t like, ‘Let’s neaten this and quantize this. Let’s clean up the drums.’ If there was a glitch with the pedals, it would be celebrated like it was a really cool thing.”

As for guitars, Love uses a Gretsch Double Jet in Firebird Red, which she runs through a Fender Hot Rod Deluxe combo. “I use Fender amps because, again, they’re a bit more true-sounding,” she explains. “It really complements your sound when you use a lot of pedals.”

Thereafter, it’s about finding a tone that will cut through and be heard. “Because the bass is so wide and low, I tend to also go super-high, like a falsetto range,” says Love. “Especially with the sound being so heavy, I tend to play higher octaves up the neck because it is a way for it to cut through.”

It’s not subtle, but then that’s not the Nova Twins’ MO. If you’re going to dismantle conceptions of genre and construct an empowering sound that’s all your own, where’s the use in being subtle? “It’s quite shrill and abrasive, but in the best way!” says Love. “It works for us.”