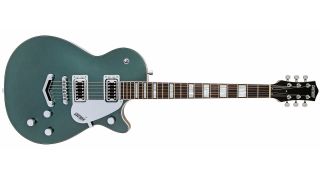 Gretsch guitars have a reputation for being best for rockabilly and country music, but they’re really versatile enough for playing pretty much every style of music, including hard rock, funk, jazz, blues, punk and just about everything else (except for maybe blackened death metal, but even then I bet one could work).

To me, a Gretsch ranks as one of the top five essential electric guitars every guitarist should own, particularly since their models deliver a unique sonic voice that’s unlike most other brands.

One setback for many players is that the best-known and most highly coveted Gretsch models like the 6120, Duo Jet and White Falcon start at prices above $2,000 and go up from there. Fortunately, Gretsch also offers much more affordable Electromatic and Streamliner models that deliver impressive, genuine Gretsch style and vibe for about a quarter of the cost of the 'professional' models.

We took a look at a pair of Gretsch’s latest affordable new guitars, the G5220 Electromatic Jet BT Single-Cut and the G2622T Streamliner Center Block.

Like the Duo Jet, it features a chambered mahogany body with an arched laminated maple top and a mahogany set neck with a 24.6-inch scale length, 12-inch radius and 22 medium jumbo frets. It even includes classic G-Arrow control knobs.

The G2622T Streamliner Center Block takes a design cue from Sixties-era Gretsch double cutaway hollowbody models like the 6120, Country Gentleman, Rally and Viking, but it has a shallower 1.75-inch body depth and spruce center block that runs the entire length of the body, distinguishing it as a semihollow model.

The pickups are a pair of high-output Broad’Tron BT-2S humbuckers; the hardware includes a Bigsby B70 vibrato tailpiece and black vintage-style control knobs, while finish options are Gunmetal, Riviera Blue and Torino Green.

Absolutely every detail about these Electromatic and Streamliner models is dazzling, from the eye-catching finishes and impeccable construction to the comfortable playability and snarling, aggressive tone. Both models deliver distinctive Gretsch character that will please the most discriminating vintage Gretsch enthusiasts and neophytes alike.

In a blindfold test, most guitarists would not be able to tell the difference between these guitars and many of Gretsch’s more expensive models - they are simply that good.

The G5220 Electromatic Jet’s pickups are impressively hot, delivering blistering, ballsy overdrive that’s perfect for most styles of rock, including metal and punk. The frequency range is a little wider than that of a classic Gretsch Filter’tron, with big, tight bass, full, rounded mids and surprisingly rich treble.

The G2622T Streamliner’s tone leans more towards classic Gretsch hollowbody territory, with a distinctive midrange honk and reverb-like body resonance that’s ideal for anything from hot-rodded rockabilly to smoking blues. The solid center block allows players to crank the amp’s volume and gain way up without experiencing unwanted feedback.

While both models are undeniably ideal for players looking for their first Gretsch as well as dedicated Gretsch junkies looking for another addition to their collections, these guitars are also highly recommended for guitarists who previously may have never considered a Gretsch. These are versatile, exceptionally playable instruments that sell for outrageously competitive street prices that are so affordable you may want to seriously consider getting both.

• Both models are offered with an impressive selection of finish options with classic or modern appeal.

THE BOTTOM LINE: Offering incredible tone, playability and style for street prices that are jaw-droppingly low, these Electromatic and Streamliner models are perfect for anyone who has ever wanted a Gretsch as well as players who may not have considered Gretsch before.