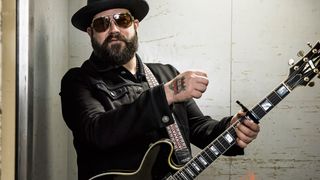 As you might expect from a man who owns a guitar shop, Chad Taylor has got some beauties on the boat. Before we get to his rig, he shares the stories behind some of his favourite electric guitars back home, guitars such as his 1961 "Mary Lou" Fender Jazzmaster.

The Mary Lou is named after his eldest daughter. He bought it from César Díaz, Stevie Ray Vaughan's former tech, who applied the "Mary Lou" decal from the same pack of stickers that the famous SRV decal came from. He tells us of the '56 Les Paul he smashed on Saturday Night Live after too many green room martinis.

"I would not do that now," he says. "I want to make that clear!” His tech Matt Gracey recovered the guitar – it plays better than ever. It's a strange thing, says Taylor, Les Pauls only get better with road miles in them, and tonight's have been refinished, repaired, and only now have found their voice after 20 years of touring.

But maybe the best place to start today is with a Jazzmaster named "Scarlett".

"I’ll have Scarlett onstage tonight," says Taylor. "What’s kind of cool about that guitar is that it always tours as the backup and people really haven’t seen that one so much. It will be cool that you guys get photographs of it.”

"I had been a big Elvis Costello guy, and I can remember the first time I had ever seen a Jazzmaster; Elvis Costello holding one and I remember thinking to myself, ‘Well, what kind of a guitar is that?’ So if you think about my childhood, when I was growing up, I mean, the Jazzmaster in particular wouldn’t have been a popular guitar by any means. Those off-set guitars hadn’t become popular. Y’know, you’d see Les Pauls, Stratocasters and Telecasters, but is just something odd about the shape of it and the look of it.

"I flew over this 1961 Jazzmaster, which is Fiesta Red, which is aptly named Scarlett, after my second daughter, and then back at home there is a black 1961 Jazzmaster named Delilah, which is named after my youngest daughter. It’s really funny because all the girls get jealous over which guitar I am touring with."

"There are two Les Pauls in the boat. The two models are ’59 reissues. I probably bought them in 1996. What’s interesting is how different those guitars feel now from when I bought them. When I bought them I solely bought them as touring instruments, like maybe not the greatest-sounding Les Pauls, but now, after touring and playing with them for so long, they sound really so much better than most of the other Les Pauls I pick up. I think it just has to do with the blood, sweat and tears of being onstage."

"Both of those Les Pauls have recently been refinished. I would say that both of those guitars are more than 20 years old now, and I was never really happy with the lacquer finish on them originally. I had a gentlemen – I wish I could remember his name right now but he is based in New York – refinish both guitars. The lacquer that they’ve put on is so much better. We’ve got a snappiness to the guitar that had never been there – new saddles, new tuners. They have seen the world, been beat up a few times. I swear the Les Pauls that I have broken and then fixed sound better!"

"The Gibson Custom Shop actually had built that guitar and it is dead-on to Keith Richards’ ES-335. I had to have it. I bought one other guitar from that guy. There were 10 prototypes of Dave Grohl’s Trini Lopez made and I bought one of the 10. The colour is called Pink Champagne; it’s like a sparkle [finish]. I bought them both from the same guy and they are incredible guitars. I am so grateful that the guy thought of me and called me. I don’t want to spoil the setlist for you but we’re going to do Paint It Black so I have got to play this guitar on that song!”

"Those are both made by Nash Guitars, by Bill Nash. They are all built out of Fender, licensed products, he just takes them through a relic’ing process, and I have to tell you I just love them. They are not inexpensive guitars; they are not 150-dollar guitars, but for what they are and how they play it is a great instrument to keep on tour and play on the road. They stay in tune great. I can really beat on them hard. I am a super-bombastic, hard player – super-hard right hand. To me, that’s where the tone comes from. I mean I guess the left hand has something to do with it but a lot of it is how I strike with the pick.

"Those Strats have particularly high action. Everybody always laughs about my action, because if you pick up my guitars they are not very smooth feeling; they’re almost rugged and rough. We spend a lot of things adjusting two things on the guitars. One, the action. Two, really sorting through the gauges of guitar strings to make sure that we have the right gauge of strings. I like heavy strings, but, funnily enough, the older I get, I’ve lowered the gauges. But the gauge of string coupled with the action really means so much.

"The third priority is setting up the pickup height compared with the strings. I do not like high-gain guitars. I usually really like low-impedance guitars."

“I always say that the desert island amplifier is a JCM800. I mean, to me, it is the epitome of rock ’n’ roll. It’s the holy grail. Tonight I’ll have tons of fun, especially in a smaller venue. I’ll have tons of fun getting my guitars super-crunchy. Yeah, you can’t beat it. Soundmen love to run drums loud and vocals loud and the easiest way to fix that and have the audience hear your guitar is to play a JCM800, ‘cos it’s got so much mid in it the soundman can’t really turn it down."

"That was built by a guy named Bob Bradshaw of Custom Audio Electronics, and I actually convinced Bob to move from Los Angeles to Lititz, PA, and he is now a part of our shop, [Tone Tailors] which is pretty awesome. He has worked with everyone – from Eddie Van Halen to the Edge, and, of course, building my rigs, too.

"I’ll have two mono signals onstage. All gain stages affect all amps, if that makes sense; if I step on a distortion pedal it goes through both. I split the main guitar head off into stereo effects that only send the effects – stereo reverb, stereo delay, stereo modulation effects – and those are fed via DI into my in-ears.

"This small board, with a small footprint, is really three distinct guitar signals: Guitar Head A, Guitar Head B, Stereo Effects. I can do so much with this, so many different layers. And the programming is all handled by the Custom Audio Electronics foot controller. All the switching is done live, it’s done in real-time”

"I am a fuzz junkie. This just happens to be the fuzz pedal of the moment. I’ve probably got another five or six that are getting swapped in and out of there some of the time, just for fun. But I love fuzz."

"The second one there is the Roger Mayer Voodoo Vibe, which is essentially a Uni-Vibe, a more functional version of a Uni-Vibe."

"You can hear that in – for anyone that doesn’t know – //Foxey Lady//, that famous sound, but that is used heavily on Dolphin’s Cry. So each of those [Roger Mayer effects] are gain stage pedals that only go up to the amp heads."

"It’s one of the only modulation pedals that goes into the front of the heads. JHS is a great little manufacturer. Josh [Scott] who owns the company makes awesome pedals. It’s just a good analogue-sounding delay."

"There is a Strymon Flint, which does, very simply, reverb and tremolo, and that does go into the front of the amps."

"Now I’ll jump into the stereo section. An Eventide H9 is doing almost any sound you are hearing from Throwing Copper because we used the Eventide 3000 [rackmount], tons of it. I don’t really use the harmonizer function too much unless I am harmonizing it with a reverb."

“The primary delay, and again, those are for stereo delays, so somebody listening to this might say, ‘Well what the hell is the difference between the Pink Panther and then the TimeLine?’ Well the Pink Panther I have a really long quarter-note, or whole-note delays going on. So, if I am playing a guitar solo, and I want the delay to come back one-to-one with the guitar amps, I will turn on the pink guy. If I want more subtle stereo effects, slap-backs or anything like that, I’m going to the TimeLine because that is not going to make the front of the amp mushy.”

“The Big Sky is essentially just like the TimeLine except that it is reverb. What I can do there is I can feed my signal into a reverb and delay the reverb. Or, I can have reverbs then add delay. The original signal is always pure."

"It does the most basic modulations. This modulation only goes into the second guitar amp onstage. In the song Run To The Water, I have an octave up on this so my guitar onstage actually sound like a 12-string guitar. One amp is playing the unmodulated original signal and the second amp is playing an octave up, and I am careful with the blend."