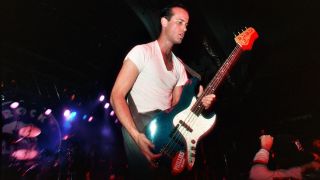 Led by Scott Weiland’s belted vocals and Robert DeLeo’s thematic songwriting and Motown-inspired bass playing, Stone Temple Pilots had no idea their hard-rocking, grunge-era sound on Core would reach #1 on the Billboard charts, go eight times platinum, and propel them to stardom parallel of such contemporaries as Nirvana, Soundgarden, and Pearl Jam.

The singles Sex Type Thing, Plush, Wicked Garden, and Creep became adolescent anthems of angst and coming-of-age - and all of a sudden, being from Seattle was no longer a requisite for alternative ’90s bands.

A lot has happened to Stone Temple Pilots in the 25 years since that recording. Through a span of six albums, we saw Weiland’s death in 2015, followed by the death of his successor, Linkin Park’s Chester Bennington in 2017.

But DeLeo has never let affliction curb his creativity or his passion for music; if anything, it has only strengthened his resolve over the years. Atlantic Records has released a Super Deluxe Edition of Core for its 25th anniversary, and between playing stints with Hollywood Vampires and Kings Of Chaos, DeLeo and his brother Dean (guitars) and drummer Eric Kretz have things in the works for STP. In the meantime, he’s focused on the album that started it all.

How does it feel reflecting on Core after all these years?

"I have a lot of feelings and emotions toward it. Those songs can bring me a memory and send me back to very specific places when I hear them now. It seems like a long lifetime ago. It was a very exciting time for the four of us when we finally had a chance to make a real record and make a real statement. I look back at it very fondly."

What do you remember about the recording process?

"I spent a lot of time trying to figure out where I was going to take the bass for that journey, and what kind of tone I wanted. At that time, I couldn’t really afford a bass.

"Eventually the place where I was working [Schecter Guitars] built my first bass, which was a blue J-style that I used on Core, and I borrowed a G&L L2000 from a friend. I didn’t have a lot of studio experience at the time; none of us had our studio tans yet. We were just trying to figure it all out for the first time."

How did you capture your bass?

"That record was just an SVT with a Sennheiser 421 mic on it. Brendan would just set a mic up and say, 'Okay, let’s go.' He’s the kind of guy who would get bored if you took too long tracking an album. But he had a lot more experience in the studio than I did, so I was relying on him to convey what I was trying to get across.

"I would describe the tone that I wanted to him in great detail. Eventually, I learned how to acquire the sound I had in my mind. By the third album, I pretty much dialed in the gear setup that I still use now."

In retrospect, what do you think of your bass playing?

"I don’t think I had the vocabulary yet, but I knew I had the spirit. I really just wanted to play for the song. I’ve always felt that you have to play what the tune requires. It’s the song first, and then you accommodate that piece of music with what you have—whether it’s your licks, your tone, or even the bass you choose. Everything matters.

"Did I get myself across as I would now? I don’t think I had the tools or resources to do that back then. But listening back, I was doing the best I could."

What’s one of your favorite memories from those sessions?

"When we began looking for producers, the first one who came in was Eddy Offord, who produced some great Yes records. That was a real treat for us, because we grew up on Yes, and I got to pick his brain about one of my favorite bass players, Chris Squire, rest his soul. I must have asked him so many damn questions about Chris and his playing and his tone."

Does this celebration bring you any solace in Scott’s passing?

"It’s tough celebrating something when the guy who was very instrumental in making it happen isn’t here now. Back then, I never would have imagined that Scott wouldn’t be here today.

"It would have been nice for us all to enjoy this time now, because we did make something truly special together. And here I am 25 years later talking to you about it, so it must have been special for other people, too. It’s incredible when you put that in perspective."

How did that recording process sculpt you as a bass player?

"It helped me find my voice as a bass player and as a songwriter. As bass players, we’re constantly learning and absorbing, and there are always new things to put in our vocabulary, whether it’s movement, tone, chord choices, or how you influence the beat. That process was a speed course in all of those things.

"There are still things I’m discovering now that make me decipher something that I’m writing a little differently. It’s a lifelong journey of figuring out how to keep our playing fresh and not get stale. We have to be always moving forward."