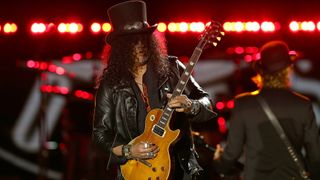 The mid-'80s to early-'90s witnessed the arrival of many a great guitarist, but none more iconic than Slash - with his black top hat, low-slung Gibsons and off-the-cuff blues licks that infinitely felt more vocal than your typical guitar solos. And then, of course, was the fact he played in what was the world’s most dangerous rock ’n’ roll band.

Anyone who has caught them on their long-awaited Not In This Lifetime reunion tour will be able to attest they’ve lost none of that edge - though Slash has also been keeping incredibly busy with his solo band, featuring Alter Bridge frontman Myles Kennedy on lead vocals.

Whether you’re hoping to recreate the early Appetite For Destruction sounds or delve into Slash’s more recent tones, here’s everything you need to know…

Though he’s been known to dabble with guitars made by BC Rich, Fender, Guild and Travis Bean, there’s really only one guitar brand that comes to mind when we think of Slash. And while’s he been spotted with Flying Vs, ES-335s, Customs and Explorers, it’s the Les Paul Standards specifically he’s been most associated with - generally on stage with him for almost the entire set.

Ironically, the actual Les Paul used on some of the musician’s most legendary recordings, including virtually all of his parts on seminal debut Appetite For Destruction, was a 1959 replica built by late luthier Kris Derrig, fitted with Seymour Duncan Alnico II humbucking pickups.

Gibson Custom 60th Anniversary 1959 Les Paul Standard - $6,499
The 650 Les Paul Standards made in 1959 are the most collectable instruments in Gibson history - which is exactly why Slash’s copy was modeled on that specific year.
So, if you have the budget, this 60th Anniversary reissue from the Custom Shop would be of worthy consideration and also hold its value well.

Epiphone Les Paul Classic - $449
There might not be any more Epiphone Slash signatures currently in production but the Les Paul Classic does come in some finishes similar to what the man himself has used in the past, including Honeyburst and Heritage Cherry Sunburst. The zebra Alnico Classic Pro pickups also feel like a nod to the cat in the hat, with the added bonus of coil-splitting and phase switching.

Outside of the Gibson world, the B.C. Rich Mockingbird is the only electric you’ll find Slash using on stage - on recent tours usually for songs like You Could Be Mine (which was recorded with one), Chinese Democracy, Sorry and their Black Hole Sun cover in tribute to Chris Cornell.

In fact, most of the guitarist’s parts for Appetite For Destruction were written on his B.C. Rich Mockingbird and Warlock, before manager Alan Niven turned up to the studio with that famous ’59 copy.

ESP LTD Max Cavalera MAX-200
While it’s not exactly a Mockingbird, the ESP LTD Max Cavalera signature might be close enough for those on a budget. And though it’s an instrument made with a heavier kind of metal in mind, it should be able to cover lower gain classic rock tones with minimal ease.

The acoustic has also played a big part in the Guns N’ Roses hero’s sound over the years, from early songs like Patience and Used To Love Her, through the Slash’s Snakepit years into Velvet Revolver and his more recent exploits as a solo artist.

Initially, it was a Guild JF-30 dreadnought in his hands, though Slash has been spotted playing Gibsons, Martins, Matons and even Taylors at certain points.

Epiphone Masterbilt AJ-45ME - $699
The more affordable take on the legendary J-45 round shoulder dreadnought in Vintage Sunburst Satin looks could easily be mistaken for the November Burst J-45 in Slash’s new Gibson range. With a Solid Sitka Spruce top and active preamp system, you can bank on it sounding pretty close too.

Though Marshall have always been a core staple of Slash’s sound, it’s worth noting many of his heads over the years - which have included JCM800s, Silver Jubilees, signature models and Vintage Moderns - were modded in some way.

More recently, he’s been linked with engineer and builder Dave Friedman, whose brand is famous for offering classic tones at the boutique end of the market. And though there have been rare moments in the studio where Slash has used a Vox AC30 and even a Fender combo, if you’ve ever seen the man on stage, it’s all about the Marshalls.

Friedman BE-100 Deluxe - $3,799.99
The highly revered BE series recaptures the magic some of the finest Marshalls ever made and if you’re worried about 100 Watts of EL-34 power, there is also a 50 Watt version. They’re not cheap, but they’re virtually unbeatable when it comes to rock tones.

Marshall 2555X Silver Jubilee - $1999.99
The JCM800 2203 was Slash’s amp of choice in the early days and then he started incorporating the Silver Jubilees (marking the 25th anniversary of Marshall) upon their release in 1987. On the current world tour, the axeman has brought two of his original Silver Jubilees out of retirement, as well as one of his limited run Marshall JCM2555 signature heads.

Marshall DSL5CR Combo - $499.99
It might only pack five Watts of tube power and be suited to bedroom players or performances in small confines, but this Marshall combo certainly can roar when needed. You could get a non-tube Marshall that’s louder for a bit less, but it won’t have the same warmth Slash’s tone is synonymous with.

Slash generally sticks to a more organic sound, utilizing the overdrive and reverb from the amp, and therefore isn’t hugely reliant on pedals - except for perhaps his Cry Baby wah and Boss Digital Delay.

For some extra color, he’ll kick in one of his MXR modulation pedals and, in more recent times, his signature MXR Octave Fuzz. But for most of the set, in both of the bands he’s currently touring with, you’re just hearing a Les Paul and a Marshall - sure, there might be a noise gate or EQ in between, but virtually all of the tone is coming from the guitar and the amp.

Jim Dunlop Cry Baby SW95 Slash Wah - $169.99
If you’re hoping to replicate Slash’s wah sound, then it makes perfect sense to get one of his signature models - which, in all fairness, don’t cost a huge amount more than the standard version of the Cry Baby. These ones, however, benefit from on-board distortion and the highly acclaimed Fasel-loaded Classic circuit. They were the very first in Slash’s signature pedal range with Jim Dunlop and MXR.

Boss DD-3 Digital Delay - $110
Though Slash is currently running two Boss DD-500s in his effects loop, there’s one delay pedal that’s always been out with him on stage running into the front of his amps for the louder ambiences, such as the famous intro to Welcome To The Jungle. The DD-3 also gets used in a similar way on Slither and Rocket Queen, so if you’ve trying to nail that sound, this is exactly how he does it...

MXR M234 Analog Chorus - $99.99
There’s an unmistakable shimmer to those clean guitars at the beginning of Paradise City, courtesy of a chorus pedal. While he’s used the MXR Stereo Chorus in the past, Slash is currently kicking in the MXR Analog Chorus on the reunion world tour.

MXR Octave Fuzz - $149.99
There’s another pedal that gets kicked in for Paradise City, this time during the solo section, and that’s the signature Slash Octave Fuzz from MXR. Before the collaboration he was using the company’s Blue Box to add grit and depth where needed.

Dunlop Heil HT1 Talkbox
If you’re hoping to nail those screechy, voice-like guitar sounds on Anything Goes or Rocket Queen, you’re probably going to need a Talkbox. The Dunlop Heil is the original - famously used by Peter Frampton, Joe Walsh, Jerry Cantrell, Joe Perry and… you guessed it, Slash.