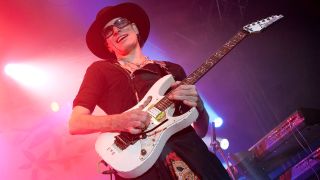 There are many reasons why Steve Vai is widely considered the greatest living guitar player on earth: his ferocious alternate picking, liquid legato and seamless sweeps to name but a few.

There’s also plenty to be said of his unrivaled musicianship and control over his instrument, the kind that can only come from years of intensely devoted scholarship, though in many ways it’s his sheer inventiveness that separated him from every other shredder to arrive in the '80s.

Much like his own heroes Brian May and Jimmy Page, Vai is the kind of guitarist who thinks way beyond the fretboard - embracing effects and production techniques as well as harmonics and divebombs to create sounds that had truly never been heard before.

“I always think, ‘What can I do that’s different?’” he told this writer in 2017. “That’s an important place to go in your head when you want to create something new. When it starts getting dangerous is when you think, ‘What can I create that everyone will love or is better than everything else!’ Then you are limiting yourself. You will never be able to create something that everybody loves, so stick with what you really love.”

Wise words indeed. If you’re looking to get a bit Bad Horsie yourself, saddle up and check out this Guitar World guide to sounding like one of the greatest visionaries to pick up the instrument…

Guitars are very rarely as tied to an artist as the RG is with Steve Vai. The series was launched in 1987 alongside his original signature JEM, with many similarities between the two instruments. “My career with Ibanez has been extraordinary... I still can’t believe it,” Vai commented, in the same interview.

“Looking back I think, ‘Holy mackerel, how did that happen?’ The JEM has been so consistent and successful for over three decades. Its sister guitar, the RG, is one of the biggest-selling guitars in the world. The Strat is first and then it’s neck and neck between RGs and Les Pauls. It’s like the gift that keeps on giving, but most importantly it’s the guitar I love playing. It has this personality virtually shaped like my mind and body.”

Ultimately, if you’re looking to recreate these sounds and tones - you’re going to need some sort of Superstrat with 24 frets, a five-way selector for an HSH pickup configuration and a double locking tremolo system that can handle extreme whammy bar abuse. Which, thankfully, is the exact kind of thing Ibanez are masters of...

Ibanez JEMJR - $499.99
Considering how much less it retails for, the JEMJR is a great way of getting those Vai-like tones on a budget. Best of all, it still comes with the main attributes of the JEM series like the Tree Of Life fingerboard inlay, the Lion’s Claw tremolo routing and the Monkey Grip. The Ibanez Quantum pickups aren’t quite as musical as Vai’s signature DiMarzios, but at this price they’re close enough.

The first ever mass-produced seven-string arrived in 1990 and was in fact Vai’s UV7, which he co-designed with Ibanez with hopes of tapping into new dimensions and ranges. And he most certainly did - from using an early prototype on stage with Whitesnake to, perhaps most notably of all, his Grammy-winning masterpiece Passion And Warfare. Three decades on, it still towers as the quintessential instrumental guitar album, with a creative fearlessness that remains virtually unrivaled.

Ibanez UV70P - $1,499.99
Available in black, complimented by cosmo black hardware, a green dot inlay on a bound Panga Panga fretboard, DiMarzio Blaze pickups and green tone volume/tone controls, the Ibanez UV70P is today’s equivalent of that game-changing UV7 released in 1990. If you’re hoping to give Vai classics like The Audience Is Listening or The Riddle a try, this will get you very close indeed.

Schecter Demon-7 - $419
Okay, so it doesn’t say Ibanez on the headstock, but for under 500 bucks you do get a decent quality 7-string. The Demon-7 features a Basswood body with a Flamed Maple top, a Maple neck, 24 frets, two Duncan-designed HB105 humbuckers and the welcome addition of some Grey Pearloid Gothic Crosses for the inlay.

Fractal Audio Axe-Fx III - $1,999.99
Carvin no longer manufacture amplifiers, which means you’ll only be able to find Vai’s signature VL300 Legacy 3 second-hand. But if you’re a serious tweaker, you might be better off with an Axe-Fx III - the most powerful modeler in guitar history - which offers virtually unlimited options when it comes to your amp tones, effects, cabinet simulations and signal routing. Steve Vai is generally known for a more processed kind of guitar sound, which is why it was no surprise when he started incorporating Fractal into his rig.

Synergy Amps Steve Vai Signature 2 Channel Preamp Module - $399.99
In recent years, Vai has switched from his Carvin and Axe-FX to Synergy amps. His own preamp module - their first signature - was announced back in January at Winter NAMM. “I’d highly recommend anyone reading this to go and check out Synergy,” he recently told this writer. “I’d say it’s the new generation of technology. Conventionally you have an amplifier, you plug in and that’s it. Maybe it has two channels or three channels, but it’s one amplifier. Synergy developed this system that uses modules where you have analogue preamp sections of historic amplifiers, many of which are based on highly sought-after boutique amps like Friedman, Diezel or Soldano. It’s the preamp sections spec’d out to the nth degree. I’ve tested them forensically against the real thing. It’s not modeling, I don’t do modeling… it’s analog power!”

Morley Mini Steve Vai Bad Horsie 2 Contour Wah ~ $175
Only 700 of these Custom Shop wahs were ever made, so they’re definitely worth considering if you’re ever lucky enough to find one. Otherwise, the full-size Bad Horsie 2 will definitely give you all the tonal options to hone in on those Tender Surrender wails.

DigiTech Whammy - $194.97
As well as advancing his melodic range through his use of harmonics and a double locking tremolo system, Vai has also utilized Digitech’s famous Whammy pedal to extend the fretboard on songs like Touching Tongues and The Animal. It’s become one of the most permanent fixtures on his board…
“For the guitar sound [on The Animal] there was a Whammy Pedal used that was set to a 5th down,” he once explained. “The fingering of the main rhythm feels like the key of A minor, but with the harmonizer set a 5th lower it changes the tonality to D minor.”

Eventide H9 - $499
If you’re looking to recreate the sounds heard on Ballerina 12/24, you’re going to need something a bit more powerful than a DigiTech Whammy. An Eventide H400 was used in the studio, effecting not only the original guitar’s pitch but also that of each stereo delay repeat – generating several notes from each strike of the string. The H9 packs all those innovative features and more into one compact pedal.

Boss DD-500 - $349.99
Like most lead guitarists, Vai relies heavily on delay to thicken his tones and add atmospheres. While in recent years he’s leaned on his Axe-Fx to handle his echoes and verbs, there was a time where he was using a Boss DD-7 for each side of his stereo setup. Boss’ current flagship delay unit, the DD-500, offers 12 different delay types with a dual mode for running two simultaneously, plus a looper, options for an expression controller and added compatibility via MIDI and USB. All in all, it’s the most powerful delay unit on the market.

Boss OD-200 - $249.99
Though he’s released his own signature distortion pedal, the now-discontinued Ibanez Jemini, and used a TS9DX and TS10 Tube Screamer at points, it’s the Boss DS-1 that Vai has been most associated with over the years. The pedals are still among the most affordable distortion boxes in production today, but it might be worth considering the OD-200 as an ‘all-in-one’ to cover all kinds of overdrive and fuzz.

Keeley Compressor Plus - $129
Compressors have rarely been seen on Vai’s pedalboard for live shows, but in the studio he’s used compression quite extensively - perhaps most notably on his clean sounds which, combined with using the split pickup options on his guitar, have often sounded extremely glassy. The Compressor Plus, made by pedal guru Robert Keeley, is one of the best of its kind.

Morley 20/20 Volume Plus - $129
Granted, they’re almost always the least fun pedal on any board - but if you’re looking to replicate every aspect of Vai’s tone, you will need a volume pedal to sweep through different chords and notes. He’s generally used the Morley Little Alligator, now discontinued, so the optical 20/20 Volume Plus would be the next closest thing.

Steve Vai has traditionally used Ernie Ball Super Slinky strings, though has been known to go up to the 10-46 Regular Slinkys, too…

“The gauges haven’t really changed,” he commented in a 2017 Ernie Ball String Theory interview. “I’m basically a nine through 42 guy. Sometimes I go heavier on the low end. It’s based on how long I’ve been on tour because you can sit and play in your room all day, but when you get hit the deck, everything changes, just the way you play. So after a little while, my fingers get real strong, they get more powerful when I’m on tour. So I like to have a little more fight. So I might move to some heavier, lower ends but I usually stay at the nines on the top.”